Even when women hunters doubled their numbers to about 10 percent of the market, it took a while for the gun and gear manufacturers to answer with a variety of products for women.

I hunted for about 20 years before manufacturers started to acknowledge the female hunting market and create some practical gear for women. Even after the 1990s, when women hunters doubled their numbers to about 10 percent of the market, it took a while for the gun and gear makers to answer with a variety of products for women. I hunted for years wearing men’s boots, men’s clothing, with full size rifles, and without optics. When I was a teenager and the weather was fair, you would often see me hunting in jeans and a casual jacket because men’s clothing just didn’t fit well. My rifle was heavy, not balanced to me, and did not fit my length of pull. I could not use anything other than iron sights because the stock was too long for me to gain the proper eye relief for most optics. 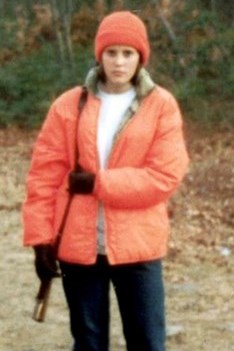 This was as close as the author could get to hunting gear as a teen. Blaze orange was required, so she borrowed her dad’s jacket.

While I came from a family with female hunters, I watched with some resentment while my brother and cousins tried new clothes, gadgets, and rifles that could not be used by me because they didn’t fit me. On top of this, I had several male instructors that would get frustrated when I couldn’t hold the rifle or pistol “properly.” I remember being told once to bring the rifle with a scope up to my head instead of bringing my head down to the rifle. That is actually good advice, but the move would be demonstrated and my eyes would roll. In order for me to compensate for the stock that was too long for me, I had to pull my shoulder back as far as possible while craning my neck forward as far as it would stretch. Then, if I held my breath, stretched even more, and stretched my trigger finger as far as it would reach, I might be able to get on target and actually get a shot off. One shot and I was done because there was no way to talk my body into recreating that move. I would also be told to get on target before flipping the safety off. This can also be good advice depending on the situation. But, for me it simply could not happen because I could not be on target and reach the safety for most rifles. Even handguns require some shifting of my grip in order to reach slide locks and magazine releases.

I felt shut out of the hunting and shooting world. I felt unwelcome, and sometimes I was not welcomed by the males (and sometimes their wives who didn’t hunt and shoot) in the group. I only stuck it out because hunting was what I did; what my family did.

It is a little odd to think how a business company can affect social change. With the invention of products made and marketed to women, the hunting and shooting industry has improved efforts to expand interest in female hunters and shooters. I know that companies shy away from innovation at times due to fear of investing money in unproven products. I really wish they would step up their game and create useful, practical products for women. But, do me a favor and don’t just color your previous products pink, make the product actually work for us! I have no pictures to include of myself decked out in women’s hunting gear because I still can’t find any that fit well or are particularly useful. 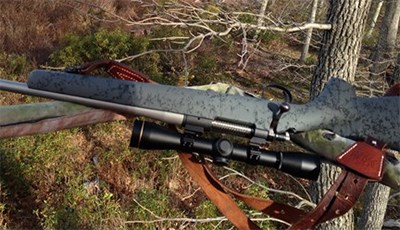 It was not until my 40s that I spent the money to afford a custom-built rifle. Melvin Forbes of New Ultra Light Arms is a true wizard when it comes to a lightweight, balanced, and well-fitting rifle. Even so, when I told him my length of pull (12 inches), he couldn’t believe it. He was unused to making stocks so short, “even for kids.” Even so, Melvin made the rifle to my specifications and several months later it arrived. When I pulled it from the case and put it to my shoulder, I just could not believe it. How could it be so easy? My neck did not ache from stretching, my fingers did not have to search for the safety or trigger, and when I fit a Leupold on top, I did not have any trouble finding the target in a full reticle picture. I know that the scientific and engineering Melvin would disagree with me, but I’m convinced that he uses magic. Magic is exactly what that rifle has been because my accuracy and especially my confidence increased, not to mention what it did for the contents of my freezer. Maybe I should name that rifle Excaliber. 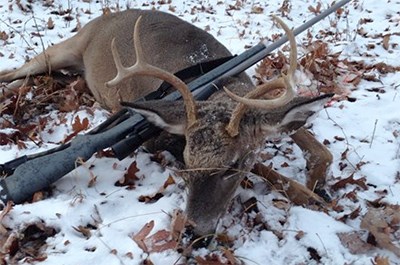 You would think that the experience of finding a well-fitting rifle would heal me from my past resentments, but it really only fueled them further. If it was this simple to find a perfect fit in one try, why isn’t everyone doing it? Why can’t I go to any sporting goods store and buy a rifle to fit? I admit that I have a chip on my shoulder and companies are going to have to work hard to satisfy this consumer. There are only a few products and even fewer companies that have gained my respect by being user friendly to women.

O.F. Mossberg and Sons, Inc. is one of the few companies that have my respect and my loyalty. They earned my respect by the introduction of their FLEX system. The FLEX is genius in that it allows you to dress up your rifle and shotgun with different stocks, recoil pads, stock combs, and fore-ends. You can mix and match, go with standard black or camo, and adjust to your heart’s content. So, their shotguns and rifles are custom fitting without the need for tools to switch parts. I usually pick the tactical adjustable stock with pistol grip, or the adjustable stock. I can then determine how much cushioning I need. I may decide to go with the shortest stock adjustment and the thickest recoil pad for using higher recoil loads, or I can use the next longest stock adjustment with the thinner recoil pad. I can use the higher stock comb for the rifle with optics, the lower stock comb for the shotgun, or no comb at all for the MMR. It reminds me of my youth when I would spend time dressing up dolls. I can ask myself, “Do I feel like hunting with a black rifle today, or shall it be camo?” Since the FLEX parts are interchangeable between rifles and shotguns, I don’t have to spend a fortune to “customize” each one. I can buy as many of their rifles and shotguns as I like, even be tempted to share them with my tall, long armed husband, and know that I can make any of them fit me perfectly in just one or two minutes. 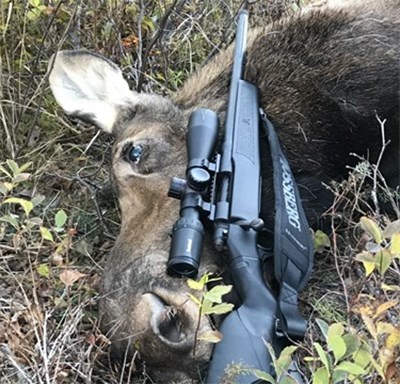 There is no substitute for well-fitting and practical gear. My thanks to Melvin Forbes’ NULA and Mossberg for finally creating something I can use. This October I had the opportunity to take a Newfoundland moose with Mossberg’s FLEX Patriot in .308. After “dressing up” my rifle with FLEX options, zeroing in, and a few practice shots, I did not have to think about my gear again. When the moose appeared, I didn’t have to think about stretching, getting a full scope picture, or reaching the trigger. I only had to think about taking the shot. I am now free to use the rifle as it was intended and fill my freezer. Thanks NULA and Mossberg, for restoring my faith.

Let’s see what other companies can continue changing the culture of hunting and shooting! It is well past time that companies start catering to us as I can promise that most of us enjoy buying new things for ourselves. I am perfectly happy to keep my business with NULA and Mossberg, but I would enjoy having options for rifles, clothing, and other gadgets. I am waiting on the day that superstores for women are born. I am waiting for Lady Cabela’s, please! Now, let’s not even get me started on pistols!

America's 1st Freedom | Giving Thanks for Our Hunting Freedoms

NRA Family | What's it Like to Be a Wildlife K-9 Officer On Opening Day?

END_OF_DOCUMENT_TOKEN_TO_BE_REPLACED

News, thank the women of the NRA, Refuse To Be A Victim
END_OF_DOCUMENT_TOKEN_TO_BE_REPLACED