When Springfield Armory set out to build the highest-capacity micro-compact 9 mm self-defense pistol in the world, the engineering challenges were matched only by the importance of the gun's name--the Hellcat. If you're not familiar, "hellcat" is an archaic slur used to describe "an ill-tempered woman," but you're sure to be familiar with the fact that "well-behaved" women rarely make history (and may not be all that good at defending themselves). Released last year, the Hellcat was an immediate hit ... and now t's being offered in Desert Flat Dark Earth on both the standard and Building on its strength as the highest capacity micro compact 9 mm in the world since its launch in 2019, Springfield Armory is proud to announce an exciting new variant of the Hellcat in Desert Flat Dark Earth (FDE). It is being offered in both standard and Optical Sight Pistol (OSP) versions. 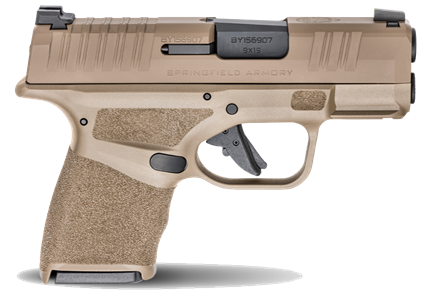 Rest assured that this new variant isn't just a coat of paint; this finish was designed to be extremely rugged as well as attractive. The Desert FDE finish is coated in Cerakote for extreme corrosion resistance ... although we must admit that it also offers an attractive contrast to the black Melonite finish on the hammer-forged barrel.

This tiny concealed-carry wonder is perfect for the "deep cover" that many women use to conceal their defensive guns during the summer months (you can read more about what we mean by that here). In fact, earlier this year, our brother publication American Rifleman awarded the Hellcat its Golden Bullseye Handgun of the Year Award, saying, "Simply stated, I want the Hellcat because the gun is an animal, and it’s bred to fight. It’s equipped with the latest technology, and its design meets my needs as an armed citizen. It’s small and light enough to carry and keep on me—always—and it’s potent enough to save my life if necessary."

A next generation defensive pistol, the +P rated Hellcat has helped reshape the way compact carry handguns are viewed. The 3-inch-barreled micro-compact pistol features a class-leading capacity of 11+1 with its patented magazine, and 13+1 with the included extended mag.

In addition to the standard model, the Hellcat OSP features a seamless cover plate that removes to allow direct mounting of a micro red dot to the slide. Complementing the optic is the co-witnessing U-Dot sight system, offered on both the OSP and standard model. It is made up of a high visibility tritium and luminescent front sight paired with a tactical rack U-notch rear.

If you're the kind of NRA Woman who gets a little "ill-tempered" when your safety is threatened, feel free to take back the "Hellcat" name as a point of pride ... not to mention a very reliable little self-defense gun. Click here to learn more.

END_OF_DOCUMENT_TOKEN_TO_BE_REPLACED

News, thank the women of the NRA, Refuse To Be A Victim
END_OF_DOCUMENT_TOKEN_TO_BE_REPLACED