The Case For—and Against—Reloading Your Own Ammunition

The Case For—and Against—Reloading Your Own Ammunition

If you’re an NRA Woman contemplating reloading, read these considerations for and against this unique hobby.

For some, reloading (often referred to as handloading) ammunition is a hobby; for others, a necessity. And even though reloading is an activity that traditionally has been assigned to male firearm enthusiasts, more women than ever are undertaking this rewarding endeavor. Reloading is made up of a series of simple and repeatable tasks, and its technicalities and complexities can at times appear intimidating if you aren't mechanically minded. But modern equipment—along with detailed instruction and the readily available ammo components—keep this activity within reach for the average shooter. If you’re an NRA Woman contemplating whether you should take the plunge into reloading, read these considerations for and against this unique hobby.

The Case For Reloading ...

1. Cost Savings
Depending on the quality of ammunition you seek, reloading can be considerably less expensive than purchasing factory-loaded ammunition. This is especially beneficial for women who shoot frequently, particularly when shooting match-quality ammunition. While the approximate cost to reload a single round of match-quality .223 ammunition is $0.50, comparable match ammunition runs at least $1.00 per round—about twice as much. (Many reloaders do not count the price of the brass because it is used over multiple firings.)

Approximate cost to load one match-quality round: $0.50

2. Immunity to Ammo Shortages
Once you have become proficient in reloading, unanticipated runs on ammunition will affect you less. Due to factors like the national health crisis, civil unrest and the sudden increase in the number of new gun owners, dealers are currently selling out of certain factory center-fire rounds as soon as they stock them, and shelves are bereft of a once-plentiful supply. However, reloading components such as powder, bullets and primers are generally still available.

3. Customization
Reloading gives serious competitors the ability to tailor rounds to their specific rifles or handguns. It may take some time to find exactly what your firearm “likes” best or what load results in the greatest accuracy from your firearm, but eventually you’ll hit that sweet spot.

4. It Can Be Relaxing
Once you learn to comfortably reload, performing the same tasks over and over can provide a sort of therapeutic monotony. Many shooters report that making their own ammunition is both rewarding and relaxing.

5. It Offers a Sense of Independence
Reloading gives women a feeling of independence unlike any other. Not only is it a lifelong skill, but it also provides a greater appreciation for and understanding of what truly goes into producing a single round of ammunition. Acquiring the knowledge to do it on your own liberates you to be able to shoot as often as you want without having to rely upon someone else or wait for a restock of your favorite round at the local big box retailer. 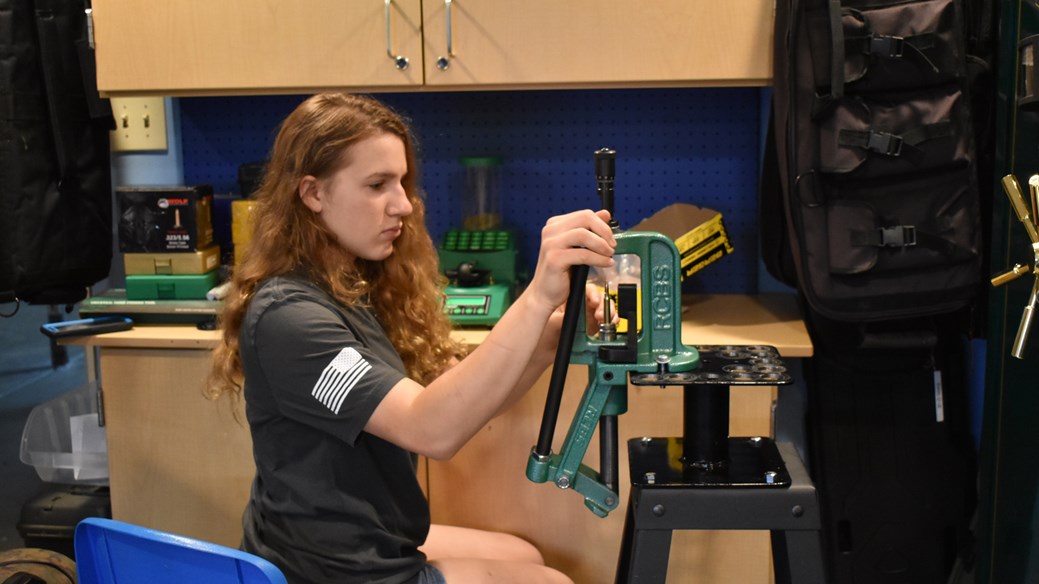 For competition reloading, the author uses an RCBS Gold Medal Seating Die. One pull of the handle seats the bullet.

... and the Case Against Reloading

1. It Can Be Time Consuming
Time constraints are often cited as an argument against reloading. While it is true that reloading can be time consuming, the time factor will be dependent mostly on how you are loading, and for which load. A typical reloading session on a single-stage press averages 1.5 hours for 100 rounds of ammunition, or approximately one minute per round. (Note that reloading sessions vary according to your experience, equipment and requirements, and brass preparation adds additional time to the process).

2. It Can Be Technical
Theories and methods of reloading abound, and your options will depend on each load’s individual requirements. There are other considerations. For example, brass cases must be tumbled and sized before loading. Some choose wet tumbling, while others prefer dry tumbling. Additionally, you'll need a "die" for each caliber you plan to reload. A die is the component you will probably use the most, as it performs the essential function of reloading, which is to decap, resize and expand the case mouth. And then there is the question of choosing between neck and full-length sizing. Should you measure the overall length or the ogive? Get it? Reloading comes with its own language, and ballistics is a massive topic in and of itself. 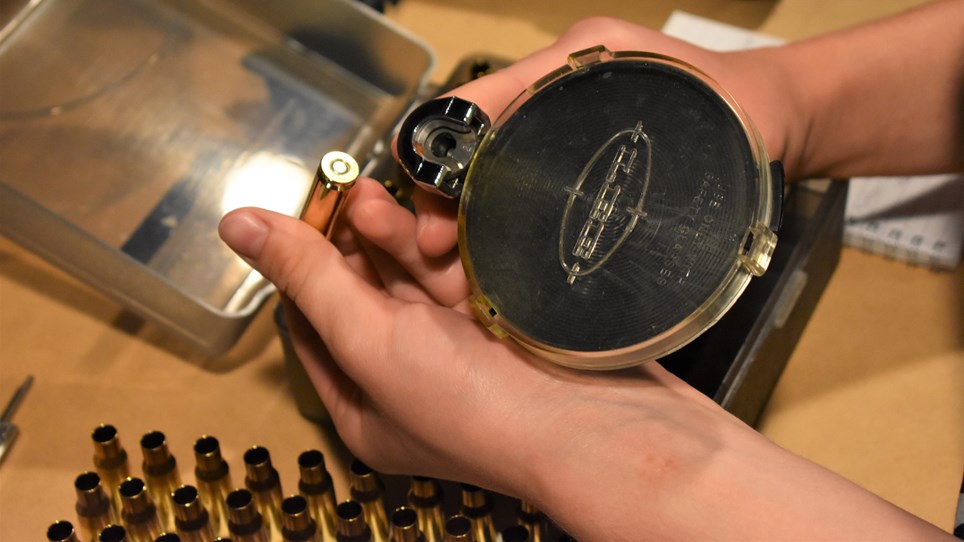 The author prefers a hand primer without a universal shell holder.

3. Initial Financial Investment
A few key pieces of equipment are needed to get started: a powder measure, a scale, press, caliber-specific shell holder, appropriate caliber-specific dies, a loading block and dial calipers. There are many other pieces of equipment needed for brass preparation, but these items are enough to get you started. Most reloading hobbyists will tell you they have a variety of brands in their stash, purchases made as they researched and tested which products they liked best. There is a wide range of prices across reloading equipment manufacturers, but you can expect entry level costs to be about $250.

4. Potential Liability
Reloading takes patience, attention to detail and responsibility. It is imperative that you follow reloading manual recipes exactly as listed, as they have been tested and proven to be safe in the caliber specified. Standard loads or “recipes” specify the type of case, primer, amount of powder and projectile to be used as well as overall length to produce a certain round of ammunition. It is unwise to shoot reloaded ammunition that someone else has loaded unless you are confident they are a safe and articulate reloader. For personal-defense ammo, it is highly recommended that you purchase factory loads.

Reloading is not for everyone, but it is important that shooting enthusiasts have an understanding of the process. Even the most non-technical person can learn to safely reload accurate ammunition. It’s imperative to find a trusted mentor who has proven that he or she can load safe and accurate rounds. 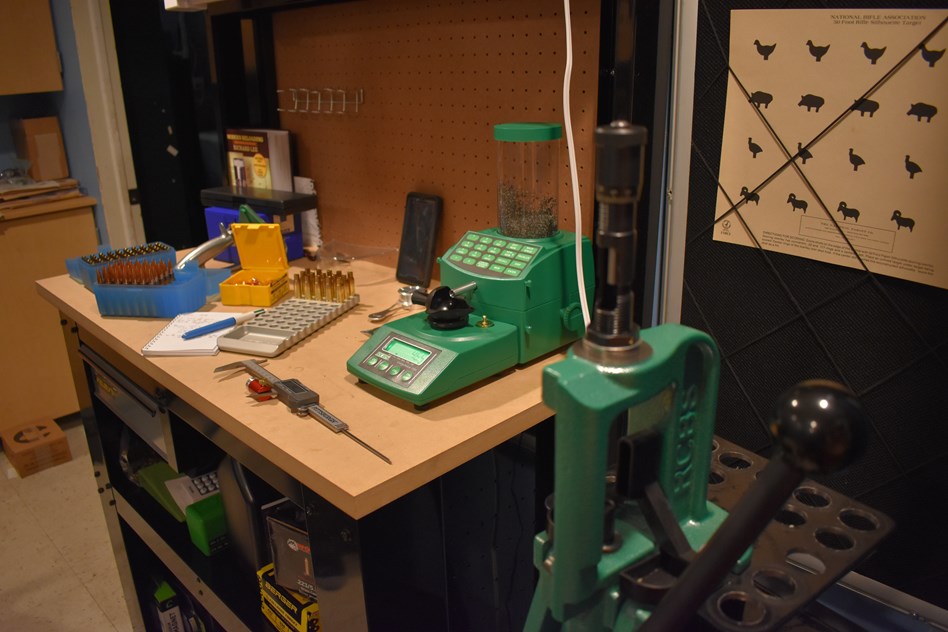 A reloading bench is a dedicated area for your equipment. The author's single-stage press is situated on a separate stand, but take note of the items on the bench as well as the manual in the corner.

6 Holsters to Comfortably Conceal Your Firearm

Shooting Sports USA | How Good Is Your Load?

END_OF_DOCUMENT_TOKEN_TO_BE_REPLACED

Head to the Range for Fall Hunt Preparation

With hunting seasons on the horizon, now is the time to ensure you and your equipment are at their best.

A woman was asleep in her bed at 1 a.m. when a man forced entry into her home

Is the most dangerous place in the outdoors a physical location, a state of mind—or both?

How does a gun gal get by with a bun in the oven?

END_OF_DOCUMENT_TOKEN_TO_BE_REPLACED

News, thank the women of the NRA, Refuse To Be A Victim
END_OF_DOCUMENT_TOKEN_TO_BE_REPLACED