5 Questions to Answer Before Buying Your First Rifle

5 Questions to Answer Before Buying Your First Rifle

You’re in the market for your first rifle. How do you decide?

Whether or not you’ve ever been shooting, you’ve decided it’s time to buy your very first rifle. Congratulations! You probably have lots of questions, and there are a few things you need to consider in order to make the best possible choice.

First, a word about budget. You can get an excellent rifle that will shoot very accurately for $500. So although you can spend thousands on beautiful wood, high-end extras and finely tuned triggers, don’t feel like you need to drop a couple of mortgage payments on a rifle in order to get something accurate and dependable.

Second, decide what the rifle’s primary use will be. Of course, most can do double- or triple-duty, but you would not use the same rifle for squirrels that you would use for elk, and you probably wouldn’t use either one of those for home defense. So identify the gun’s primary use: hunting, target shooting/competition, or defense. That decision will help you answer the following questions. 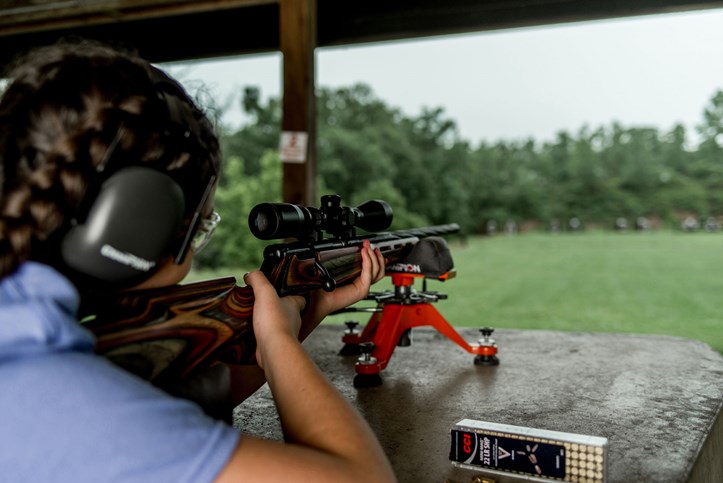 1. What Action Do You Want?
Chances are you are probably in the market for a bolt-action or a semi-automatic-action rifle. Lever-actions (think Old West cowboy guns) are still common, but considerably less so than bolts and semis. Break-actions, pumps and muzzleloaders are also an option, but they’re considered more specialty rifles that you might explore farther down the road.

Semi-automatic actions cycle the next round after the previous round is fired, so all you have to do for a follow-up shot is pull the trigger. In the United States, the AR-15 platform is the most common example of a semi-automatic rifle. They are popular for hunting and for defense, as well as for action-driven competition shooting like 3-gun.

Comparatively, bolt actions are much slower to load the next round, which you must do after each shot by pulling a bolt up (usually) and back, then slamming it forward and down again. They are the strongest and generally the most accurate actions, which makes up for the speed. Bolt-actions are the most popular choice among hunters and long-range competition shooters.

2. Which Caliber Is Best?
Rifles come in a dizzying array of calibers, from tiny to practically gargantuan. There are two types: rimfire, which are small calibers used for target shooting and small game, and center-fire, which vary widely in size and are used for just about everything except the smallest game and rimfire-specific competitions.

Choose a caliber best suited to your primary use and the action you’ve chosen. The most popular caliber for competition and defense ARs, by far, is .223 Remington, and that’s also a good caliber for medium-sized predators (coyotes), hogs and smaller whitetail deer. Big-game hunters have almost endless choices, but some of the most common are .243 Winchester, which is on the smaller side, .30-06 Springfield, which is probably the most-used deer caliber in the nation, .270 Winchester, .308 Winchester and .300 Win. Mag. Those calibers will suffice nicely unless you’re pursuing grizzlies or African big game. The .30-06 or .270 would be an excellent choice that will take just about any North American big game.

The .22 Long Rifle dominates the rimfire world because it’s inexpensive, super low-recoiling, versatile and efficient for small game. Even if you start with a big-game rifle, you will almost certainly want to add a .22 LR to your gun safe at some point. It is a classic and is the ideal rifle for new shooters to learn on. 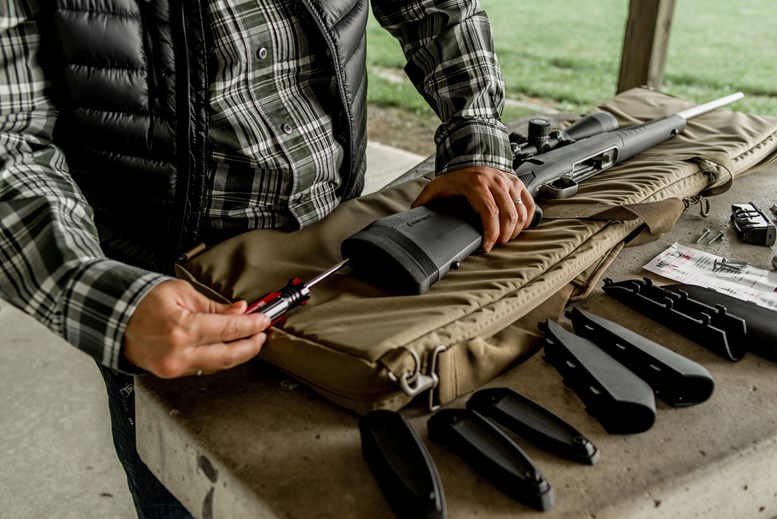 3. Should I Buy A Youth Model?
It’s important that a rifle fits you well—a gun that fits is more comfortable and easier to shoot accurately. Guns come from the factory made to fit a man who is around 6 feet tall. If you’re shorter than that, you might struggle to get a good fit. A gun can be fitted to you by a stock fitter, and you should not be afraid to pursue this option if needed, but a gun that fits you “close enough” off the rack will get you most of the way there.

If you’re shopping for a semi-automatic on the AR or similar platform, this problem takes care of itself. These rifles are modular, meaning the parts are easily interchanged for something shorter, higher or more comfortable. Many AR-platform rifles have adjustable stocks, and this lets you get the perfect length of pull (the distance from your shoulder at the buttstock to the trigger).

If a bolt-action is your jam, getting the right fit might mean a rifle specifically made for women, like the Weatherby Camilla (above) or the Savage Lady Hunter. If you are particularly small-framed, it might mean a youth model, which most of the major manufacturers offer (although women are not youth, so don’t expect perfection). If you buy a regular bolt-action off the shelf, which is what most women will end up doing, look for one with a Monte Carlo stock—this means the comb, which is the part of the gun that touches your cheek, is raised up higher than the rest of the stock. Women tend to have proportionately longer necks than men, and we often need the higher comb to see properly.

Shoulder several rifles at the gun counter of your local sporting goods store to get a sense of what feels good in your hands and what is comfortable to mount.

4. What About the Trigger?
Rifle shooters are always talking about “good triggers,” but what does that mean? It’s hard to know a good trigger until you’ve squeezed a few bad ones. A bad trigger will feel squishy and inconsistent, like the shot breaks at a different point every time. A bad trigger might also feel too stiff or difficult to pull—you should not have to torque a hunting rifle in order to get the trigger to move.

On the other hand, a good single-stage trigger feels crisp—the tension is even through the pull, then it breaks and the trigger immediately stops (no overtravel). Two-stage triggers are smooth through the pull, then hit a “wall” where the tension increases, and then break very shortly after you squeeze through that wall. Single-stage vs. two-stage is a matter of personal preference. Pull different triggers on different guns in the store to feel what you like—just double-check the guns are unloaded and you’re pointing them in a safe direction, of course.

Most manufacturers use adjustable triggers on bolt-action rifles, so you can make the trigger a little heavier or a little lighter to pull. Too light is dangerous, especially on a hunting rifle, so be sure to consult a qualified gunsmith before attempting any trigger work yourself.

Many mil-spec ARs, unless they are specially designed for competition or hunting, come with mediocre, clunky triggers. They’re not bad, but they’re nothing special. This is absolutely fine for defense and plinking at the range, but if you plan to hunt or compete with the gun, you might consider an aftermarket drop-in trigger, and again, have the work performed by a qualified gunsmith.

5. Should I Buy A Rifle/Scope Package?
You’ll need a way to aim the rifle, and in most cases, that means a scope. Semi-automatics for competition might call for iron sights or a red-dot optic; squirrel hunters might like iron sights for close-up work; but in most cases, a traditional riflescope is going to be the ticket—certainly for big-game hunting.

Many manufacturers sell rifle/scope combos that are ready to shoot out of the box, although you should note that they are only bore-sighted, which is not as accurate as true sighting in. You’ll still need to shoot the gun at paper to get the scope dialed just right. Some of these combos are a great bargain, and the process of picking out a scope, buying the right mounting hardware, putting it all together and bore-sighting the gun can be intimidating, making an all-in-one package all the more appealing. These are a fine option, particularly for beginners. Do a bit of research on the scope company before you buy an all-in-one package and make sure you’re not saddled with a piece-of-junk optic. Inexpensive scopes are one thing, but you want one made by a reputable company.

If you prefer to buy a gun and optic separately to get exactly what you want, your local gun store will likely be able to mount the scope or red-dot for a small fee, or you can tackle it yourself using these simple steps.

Congratulations—you’re on your way to buying your first rifle! Shoot straight and stay safe.

END_OF_DOCUMENT_TOKEN_TO_BE_REPLACED

News, thank the women of the NRA, Refuse To Be A Victim
END_OF_DOCUMENT_TOKEN_TO_BE_REPLACED