An ounce of prevention is worth a pound of cure when it comes to security measures around the home.

In recent months there's been a great deal of concern about a lethal virus that has made its way to our shores from overseas. My wife and I have young children at home so we are just as concerned about it as anyone else. As I've conducted research into this online, I came across the comments of a medical doctor who is also a shooting sports enthusiast and invested in emergency preparedness.

This doctor's comments were intended as a rather straight forward wake-up call. He lamented that so many folks who are currently concerned about catching an incurable exotic virus are neglecting the simple daily steps that reduce the spread of all contagious viruses: vaccinations, hand washing, use of hand sanitizer, staying away from crowds when ill, and so on.

His commentary got me thinking about practical preventative measures in general, and then home security specifically. It's important to be prepared, both mentally and physically, for the worst case scenario of having our homes invaded by dangerous intruders. And because the NRA is primarily a gun rights and shooting sports organization, you'll find plenty of information about defensive firearms and training in case the need for deadly force should arise.

However, in addition to these defensive preparations, there are a variety of simple preventative measures we can implement to increase our security while making our homes far less appealing prospects to the criminal element.  It's helpful to think of home security as having three layers: Exterior, Entries and Interior. Here are a few measures to consider:

Exterior Security
Criminals who have worked up the nerve to break into people’s homes have two primary fears: getting hurt and getting caught. Security measures employed outside of your home and around your property work in your favor by making it more difficult to break it and increasing the likelihood of discovery.

It should go without saying that an evaluation of all exterior doors and windows is an important part of a good home security plan. Replace flimsy or damaged locking mechanisms with new ones. Install locking devices when they are absent. Get into the habit of keeping doors and windows locked both day and night. Take advantage of the fear of getting caught by placing bright motion-activated lights at key entrance locations around your property. This affordable first line of defense can be an effective deterrent.

Take a look around the property to see if there are any blind spots that could provide cover for someone to slip in unseen. If so, shape or remove tree branches and shrubs which are in the way. Planting thorny bushes directly under the windows will work to discourage people from climbing in (and teenagers from sneaking out). Add locking hasps to any garden gates and keep them locked. Be sure to secure any tools, like hammers, ladders or shovels, which could be put to use by an intruder.

For those who have an alarm system installed in their home, get in the habit of using it. For those who don't, there is a wide variety of install-it-yourself alarm systems to choose from these days. Some of them cost less than a quality handgun. A great secondary alarm system the whole family can enjoy is none other than man's best friend. If you are a dog person, then your four-footed friend is an already installed intruder alert. 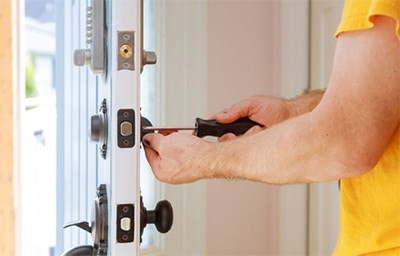 Entry Security
The best locks and strongest doors in the world won't repel intruders if someone inside the house lets them in. It's more common these days for home invasions to take place during daylight hours with one member of the team posing as a solicitor or serviceman. Teach your children to not open the door unless they’ve confirmed that it's someone you know. Wireless cameras hidden in doorbells and peep holes can be linked to smart phones to give residents a clear view of who's at the door whether they are inside the home or away.

Remember, you are under no obligation to open your door to strangers no matter what they say. If they say someone is hurt then offer to call emergency services for them. If their car broke down, then call them a cab. If they have something to sell but they’re giving off a creepy vibe, say no thank you. Whatever it may be, respond through your closed door.

If possible, install lockable secondary doors to the primary entrances. The home my family lives in has steel security doors that look and function as screen doors. Keeping these secondary doors locked, even if they are just ordinary screen doors, can provide precious time for the home owner to move away from a threat.

Interior Security
A very sensible precaution, for a number of reasons, is to place flashlights and fire extinguishers around the home, garage, and workshop. They don't cost much compared to the value they provide. Bright LED flashlights have become small and inexpensive. Fire extinguishers can be used as socially invisible defensive tools. Neighbors and visiting family members won't bat an eye at extinguishers in handy locations any more than they will wonder at door locks or smoke detectors. Not only can they put a stop to a dangerous fire, they make wonderful jumbo-sized cans of mace. Spray intruders in the face to blind and choke them and then, if necessary, use the canister as a bludgeon.

As the father of small children, I know exactly how hard it is to keep the pathways through a home clear of toys and bric-a-brac. But in an emergency situation, be it natural or man-made, the ability to move quickly through the house to gather and guard your loved ones is a key factor. Tripping over forgotten objects in the dark is not likely to improve the execution of your security plan.

Typical interior doors provide very little protection against forced entry. They are often hollow with panels made of thin sheets of particle board.  Seeing one of your kids accidentally kick a hole in one while horsing around clearly demonstrates how fragile they are! When picking one or more rooms to act as barricade locations, replace the hollow door with a solid core door to provide increased protection. Install a good lock and use long wood screws (4") to mount the hinges more securely to both the door and the frame. This is another strategy that gives the home owner invaluable time to organize their resources while awaiting the arrival of the authorities.

Parting Thoughts
I'm constantly frustrated by the unhelpful and untrue implications of anti-gun organizations that say the decision of ordinary citizens to own defensive firearms and tighten up their home security is proof of paranoia. Would these same talking heads accuse individuals who wash their hands, wear seat belts and look both ways before crossing the street of being Germophobic, Amaxophobic or Dystychiphobic? We are simply doing the best we can with the resources we have to stay a few steps ahead of a a particular type of potential problem. Conflict avoidance is far less costly than conflict resolution. Evaluate your home security measures, find out which ones need to be improved upon and take action. It's going to require time, money and elbow grease to get these changes in place so work up a schedule that's doable with the resources at hand. But don't put it off. Your family deserves to be as safe as possible in the place they call home.

END_OF_DOCUMENT_TOKEN_TO_BE_REPLACED

News, thank the women of the NRA, Refuse To Be A Victim
END_OF_DOCUMENT_TOKEN_TO_BE_REPLACED