This article was first published in The American Rifleman, May 1967

There’s a certain awesome responsibility in placing a gun in a woman's unskilled hands. When a man takes it upon his conscience to teach a woman defensive shooting, he should plan his moves carefully.

The volunteer teacher usually will find that he has psychological quirks to overcome. In addition to an inherent distaste for "nasty, greasy old guns," most women are tremendously reluctant to think of taking a human life even to save their own. Unless such attitudes are overcome, the woman should forget firearms and rely on screaming for the police. Any woman that you train might as well learn immediately that she should fire her first shot at the center mass of the body where it is most likely to kill. Most women, confronted by an intruder close at hand, may not have a chance to get off a second shot. Regardless, novice shooters cannot afford to risk simply trying to wing or disable an attacker-and quite likely end up missing him entirely. Therefore the woman, having made positive identification of her target as an intruder, should aim to hit where a bullet is surest to stop him. The time for pity is after the police arrive.

Although a light shotgun is probably the most efficient firearm for home defense, because it demands less precision in aiming and is safer to handle than a pistol, most women are likely to be trained and armed with pistols. They are handier to tuck away, or to use at close quarters.

Instruction will come under 3 headings: Safety, technique and philosophy.

Safety First
The pupil should, of course, have a firm grasp on the principles of safety before she first handles the firearm. The instructor should emphasize that a weapon must not be picked up unless the handler knows how to check whether it is loaded—that this check should be performed whenever a firearm is handled, no matter how many people may say it is empty—and that the gun should always be treated as though loaded. Stress that the firearm must never be pointed at anyone the student does not want to shoot. Stress that a gun must be kept out of reach of unauthorized persons, especially children.

An explanation of the mechanical workings of the gun selected for personal defense by your student is vital. If the training firearm is a semi-automatic pistol show her how to pull its teeth by removing the magazine and then removing the cartridge in the chamber. Remind her that a semi-auto is not empty until the magazine has been removed and the cartridge in the chamber removed—in that order. Explain in great detail the function of the thumb safety. Women have died with a loaded firearm in hand because they forgot to flick the safety off. Others have died because of accidental firing that the safety might have prevented.

If the training firearm is a revolver, show the pupil how to open the gun. Swing-out cylinders can be checked at a glance. Some single-action pistols must be emptied one chamber at a time. Though these are a poor choice for a defensive firearm because of the slow rate of fire, they may be the only arm available. As it is easy to leave a cartridge in a single-action pistol, teach the pupil to count her cartridges after emptying the gun.

With the basic elements of safety well in hand, the lady should be introduced to the handling of the firearm. Reactions may be surprising. One girl responded to an Air-weight Chief's Special (13 ounces) by squealing, "'Oooh, it's heavy!" If she had fired it at that point, she probably would have given up after the first shot. Light-weight, short-barreled, large caliber pistols definitely are not the beginner's cup of tea. Most women will be happier with a medium-weight, .22 rimfire, either revolver or auto. Why the .22? True, a.38 or .45 makes a much more effective single hole in an assailant, but a half dozen .22 hollow points in the chest will stop a would-be rapist or murderer better than a .45 slug that goes whistling over his head because the shooter closed her eyes. If the woman must be armed with a large-bore firearm, she should at least learn to shoot with a rimfire equivalent- or sub-velocity loads (Target-38's, wax bullets, etc.). Only gradually should she work up to a full load, and with those full loads, earplugs will help prevent flinch. Under no circumstances terrify the student with excessive warnings about recoil.

The standard offhand target stance will be virtually worthless in a defensive situation. The instinctive-point system, where the pistol is regarded as an extension of the arm, will prove more useful.

Use a large bullseye or a silhouette target and commence at short range—2 to 5 yards. Under most circumstances, the best stance will be a 2-handed hold with the elbows stiff and the wrists locked. In this way the gun will almost aim itself as the shooter faces the target. The 2-hand hold steadies the firearm and lets the entire frame soak up recoil. When the student can consistently put her shots in the kill zone, have her try several other stances-an assault situation may not leave enough time to take the ideal position or a babe in arms might keep one hand out of commission.

Make sure that a large target, short range, and low rate of fire are maintained and even the first few shots will not be too discouraging.

Emphasis Is On Accuracy
If a revolver is used, concentrate on double-action shooting from the first. Teach her to shoot from any position. Teach her to always put at least two shots into the target. Emphasize accuracy because speed will eventually come about on its own.

The pupil should learn to line up the pistol on target and shoot immediately. A defense situation will rarely allow adequate time to mull over the sight picture. The most important consideration is the rapid discouragement of the assailant, and to further this effect your student should be taught to keep shooting until her opponent drops or runs, or the firearm is empty.

The home defense firearm should always be kept in the same spot, where it will be easily accessible to the adults of the family. It should be kept ready for immediate use. A revolver must be kept loaded, but an automatic can be stored empty as long as a loaded clip is handy. Although the chain on a door will not long withstand a determined assault, it should hold a man out long enough for the lady to grab her gun.

For that reason, if no other, a woman should be very careful when answering the door. Where citizens are allowed to arm in self-defense, a pistol in a woman's hand makes her the equal of any assailant. Most women will never know the need for a gun. But the woman who does need one and doesn't have it may find her future needs even more limited. 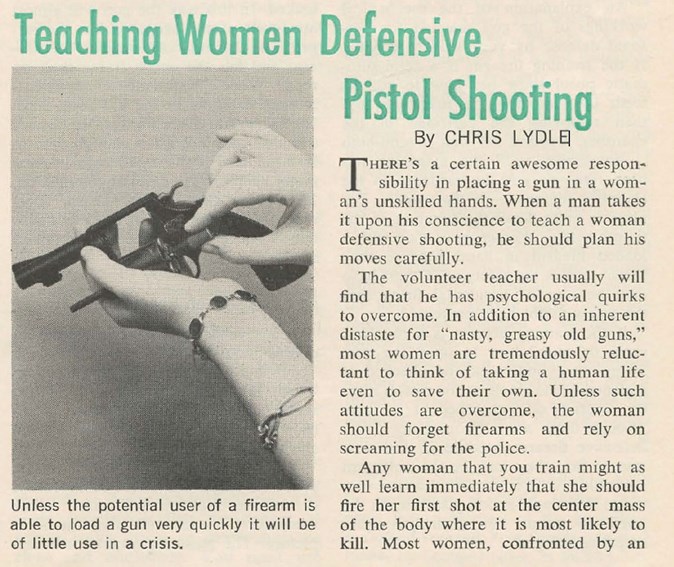 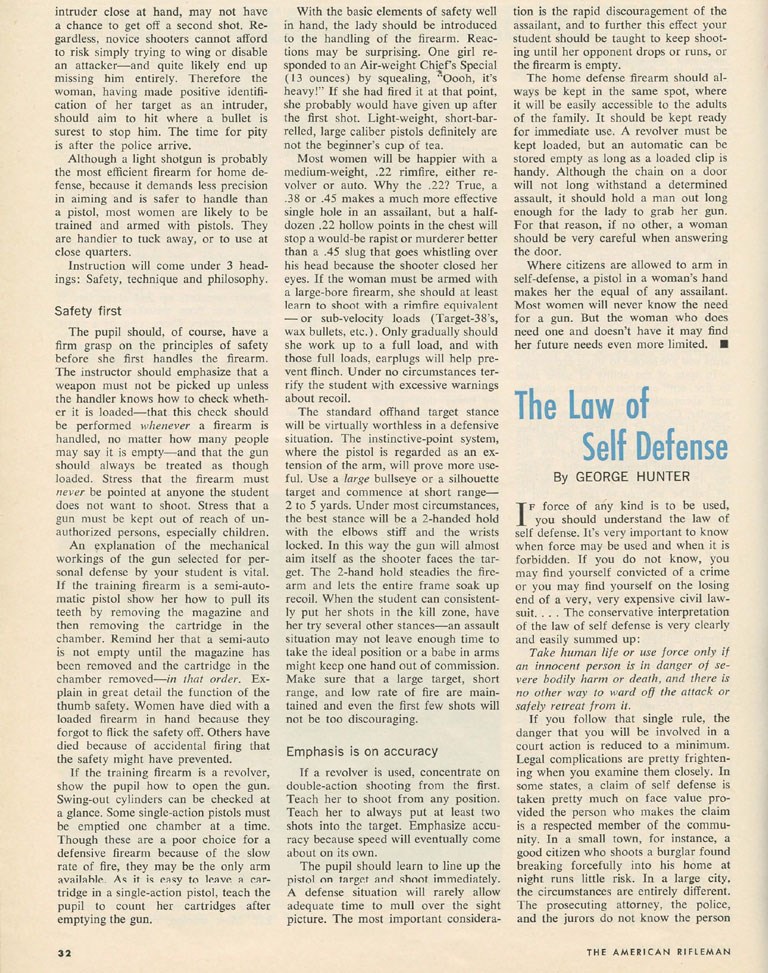 American Rifleman | The .500 S&W Magnum: Most Powerful Handgun Round In The World

American Rifleman | Handgunning in the 1920s: The Techniques of W.E. Fairbairn

END_OF_DOCUMENT_TOKEN_TO_BE_REPLACED

News, thank the women of the NRA, Refuse To Be A Victim
END_OF_DOCUMENT_TOKEN_TO_BE_REPLACED