The ammo you select will depend primarily on your purpose.

Several times a year, I volunteer as an NRA Certified Pistol instructor at various ladies’ beginner shooting events. I enjoy helping women become more comfortable handling firearms and showing them how to shoot safely and accurately. One question I hear time and time again at beginner events is “What ammo should I use?” There are a lot of different types of ammunition on the market, with new products coming out all the time. So how do you know which is best for you? Read on to find out if you’re using the right ammo for your pistol.

It’s All in a Name

Let’s start out with the right nomenclature. The “bullet” often referred to is actually one component of an entire “cartridge.” There are four parts to any modern cartridge: primer (creates the spark that ignites the powder charge), powder (when ignited propels the cartridge), case (brass component that holds the bullet, powder and primer), and bullet. The bullet comes in various shapes and sizes and makes up the tip of the cartridge. Antique firearms operated with the bullet, primer and powder components placed separately into the gun. Today, all three are enclosed in a cartridge.

Training vs. Defensive Ammo
All pistol ammunition falls into two categories: training and defensive. Training ammo will have the letters “FMJ" on the box, which stands for full metal jacket.

These cartridges are rounded or flat on the top and are a good choice for target practice and competitions. FMJ ammo is not the best for defense, because if you fire at a bad guy, the bullet may pass directly through the body, potentially striking an innocent person.

The second type is JHP, which stands for jacketed hollow point. 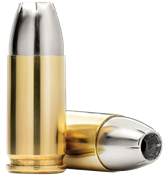 These are easily identifiable because they have a hollow, indented, cup-like tip. JHP ammo is defensive ammo; it should be used in your concealed-carry and home-defense firearms. Hollowpoints expand on impact, making larger holes in the bad guy than FMJ cartridges. Some JHP ammunition even breaks apart as it expands, causing more tissue damage.

FMJ ammo is less costly, thus is makes for the most practical ammo to use for target practice. Some manufacturers, like Winchester, have developed ballistically matched full metal jacket training loads with hollow point defend loads so that the load a person may count on to defend their life will perform the exact same as the loads with which they train.

High-Pressure Cartridges
Other markings to look for in handgun ammunition are the letters, “+P” and “+P+.” Cartridges with these designations are loaded to higher pressures than regular ammo and should only be used in guns certified for them. To find out if your handgun can handle these high-power loads, look for a “+P” marking stamped on the barrel or frame, or consult your owner’s manual.

Companies make +P ammo almost exclusively for self-defense. These types of loads generate more energy, and travel much faster than, standard ammo. This means they deliver greater stopping power. And that’s a good thing when trying to neutralize a threat.

Be aware that the extra pressure in +P cartridges can cause a lot of wear on a firearm’s moving parts. I suggest that you do not train with these loads and only use them in  defensive situations.

Number of Grains
We’re not talking about multi-grain bread. When you look at a box of ammo, you will see that it lists a certain number of grains per round. Grains are the measurement of the weight of the bullet itself, not the entire cartridge. For example, with a 9 mm round, a 115-gr. cartridge weighs less than a 124-gr. cartridge. 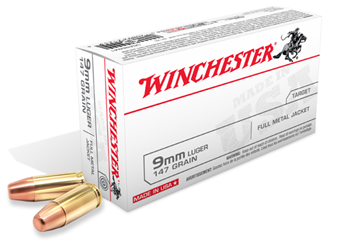 Bullet weight plays an important role in how the ammo performs, as it will impact how the firearm recoils and affect the trajectory. If you are shooting targets at short distances, the weight doesn’t really matter. Choose the lower-grain ammo that fits your budget.

Experiment
It's a good idea to experiment with different brands and weights of ammo to see which performs best in your specific pistol. When you start putting consistent groups in your target, you'll know which ammo your gun likes best.

For information on finding ammo, check out Where Can I Find Ammunition Online?

About the Author: Maureen Sangiorgio is an NRA-Certified Firearm Instructor/Range Safety Officer.

END_OF_DOCUMENT_TOKEN_TO_BE_REPLACED

News, thank the women of the NRA, Refuse To Be A Victim
END_OF_DOCUMENT_TOKEN_TO_BE_REPLACED