To say that the year 2020 has brought chaos to our doorsteps is an understatement, but the COVID-19 pandemic and ensuing civil unrest has presented an unexpected opportunity for NRA Women and Second Amendment supporters everywhere. The story of why and how starts with a simple but astonishing number: 4 million. That’s how many FBI NICS checks were run in the month of June 2020 alone.

That’s huge. According to our friends at NRA-ILA, “The annual record for handgun sales-related checks is just over 8 million. So far this year, the FBI NICS office has run just over 6 million such checks.” With almost six months left to go in the year, we can expect to break that 8 million record very soon. 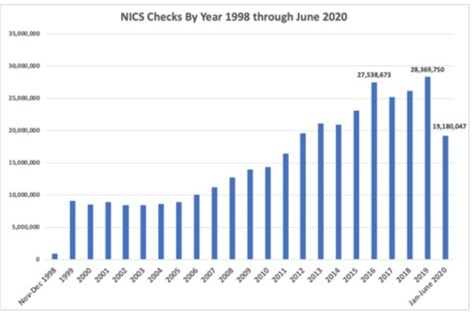 Because FBI NICS checks are run for more than one reason—for example, for non-sale gun transfers—so not every one of those 6 million checks represents a firearm purchase. There’s also no way to know how many of those firearm purchases were women … but we do know that women are the fastest-growing demographic of gun owners.

The article continues: “The numbers don’t lie. This isn’t a small group of “super gun owners” buying nearly fifty thousand handguns a day. These are your loved ones, your friends, your neighbors who have decided— for one reason or another—that they must be able to rely on themselves.”

Even if we are being very conservative in our estimates, what this means is that hundreds of thousands (possibly more) women just bought their first firearm in June. Each and every one of those is a woman who has realized that she is worth defending. What many of those new female gun owners don’t realize is that there exists a sisterhood of women who understand—sometimes all too well—what they’re going through. We NRA Women need to make sure they know that whatever circumstance brought these women to gun ownership, they’re welcome among us.

The first reason this is so critical is a no-brainer: gun safety. Although there are more women joining the world of the shooting sports every year, the fact of the matter is that the vast majority of young girls don’t get to learn gun safety as kids. Whether that’s because they grew up in the kind of urban environment where nobody’s doing any backyard plinking because nobody has a backyard, or whether it’s because their parents didn’t think it was ladylike to shoot guns is immaterial. What matters is that these new gun owners learn safe gun handling and marksmanship as soon as possible.

The second reason we NRA Women need to reach out to these new gun owners is, of course, that this is the best opportunity to educate the “average citizen” about the Second Amendment and gun rights that we’ll see in decades. That’s because this is a chance to let people who don’t know much about guns or gun rights to discover the truth for themselves … and that’s always the most effective way to change hearts and minds. It’s important to remember that many of these women who just purchased a defensive firearm for the first time have spent their whole lives being told that gun owners are violent, backwards, bitter people. It probably took more than a little bravery for her just to cross the gun-store threshold and risk that social disapproval. Now, as she dips a toe into American gun culture, she’s about to learn that gun culture is composed of regular people who just want to be safe … like her.

Are you comfortable with letting your social circle know that you’re a gun owner? If so, now’s the time to put the word out that you’re willing to take a newbie out to the range for a little mentoring. Perhaps you could offer to go with her to a basic gun-handling course (hey, a little refresher never hurt anyone). After all, there’s nothing like hands-on experience to teach a new gun owner that the Second Amendment is every bit as important as the First, and that it’s there to protect us all.

END_OF_DOCUMENT_TOKEN_TO_BE_REPLACED

News, thank the women of the NRA, Refuse To Be A Victim
END_OF_DOCUMENT_TOKEN_TO_BE_REPLACED