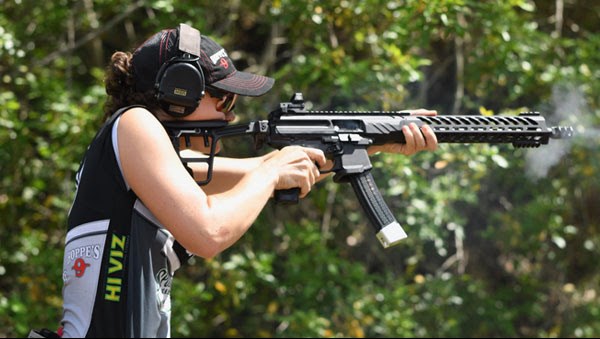 Practical shooting championships are a little different from the staid bullseye marksmanship you may be used to watching—the “practical” in the name means that competitors are expected to make precision shots while in action. To take her “High Lady” title at the 2020 USPSA PCC National Championship, Miculek completed 12 shooting stages testing her skills and agility.

This athletic shooting discipline, as you can imagine, is particularly enjoyable when competing with a light, fast-handling carbine rifle chambered in a pistol caliber—a pistol-caliber carbine or PCC. Running handgun ammunition through the longer, heavier rifle results in virtually no perceived recoil, and carbines are easy to manipulate safely. For her win, Miculek used her SIG SAUER MPX PCC with a Romeo3XL reflex sight. 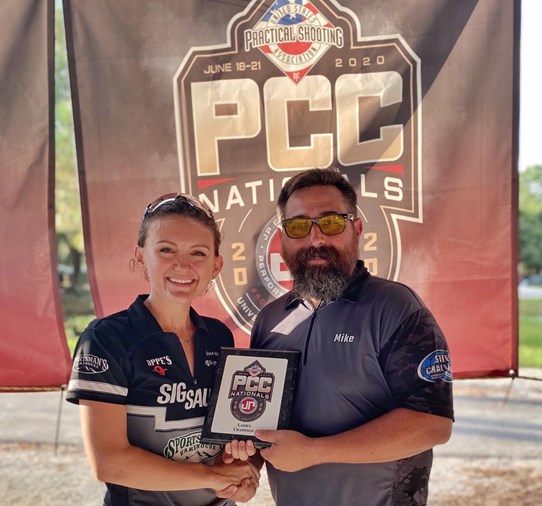 Says Miculek, “After an extended time away from the competition it was great to get back to shooting competitively at this elite level for Team SIG. PCC competition is relatively new, and it is great to see the popularity of both the PCC platform and PCC competition gain momentum.” She continues, “This year’s nationals grew to nearly 250 competitors overall, and in the Lady’s Division especially, the competition was fierce and I was challenged throughout. My SIG equipment, combined with my focused PCC training routine leading up to the Nationals, gave me the advantage I needed to defend my PCC National Championship title and bring a second USPSA Nationals title in 2020 to Team SIG.”

SIG’s Chief Marketing Officer Tom Taylor said, “We are very proud of Lena for defending her title as the USPSA PCC Lady’s National Champion and being the only female to ever hold the title since the competition’s inception. This accomplishment speaks to her dedication and commitment to her PCC training, and her skill as a PCC shooter.”

END_OF_DOCUMENT_TOKEN_TO_BE_REPLACED

These hunts are vastly different, yet offer so much perspective to a new hunter for the wild world we live in.

Not just "high lady," this career first for Lena Miculek shows that women in professional shooting sports can win it all.

END_OF_DOCUMENT_TOKEN_TO_BE_REPLACED

News, thank the women of the NRA, Refuse To Be A Victim
END_OF_DOCUMENT_TOKEN_TO_BE_REPLACED