Learn more about the benefits and limitations of the most popular rifle actions on the market today.

For those who are new to rifles and their related shooting sports, it can be surprising to find out just how many models there are to choose from. They can be sorted out, or grouped together, according to the type of cartridges they fire (rimfire or center-fire) or the activities they are designed for (big game hunting, short-range target shooting, long-range competition). But one of the most common ways folks describe various rifles is by action type.

Simply stated, the action is the mechanism within a firearm that manages the cartridges.

The action draws fresh cartridges from where they are stored, presses them into place in the barrel's chamber to be fired and then removes the empty cartridge case to make room for the next cartridge. This process of chambering, firing and ejecting is more commonly referred to as working, or cycling, the action.

Dozens, if not hundreds, of different rifle action designs have come and gone over the years, so it's simply not possible to explore them all without an encyclopedia's worth of information. Occasionally you'll bump into less common or antiquated designs (rolling blocks, revolver carbines, pump-actions, Olympic-style toggle bolts, etc.) especially in shops that sell used guns. However, there are four rifle action types that drive most of the new gun sales in today's marketplace. They include break-actions, bolt-actions, lever-actions and semi-automatic rifles. Each action type comes with its own set of benefits and limitations. The following is a walkthrough of these top four actions from the simplest design to the more mechanically sophisticated models. 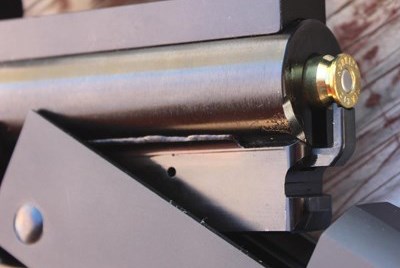 Also known as hinge-action or break-barrel rifles, break-actions have one or two hinged barrels that swing down and away from the rifle's receiver to expose the breech (chamber opening) for loading. The most common models on the market today are single-shot rifles with exposed hammers that have been trimmed down for use as youth rifles, survival guns or as hunting rifles. Occasionally you'll bump into a gun like the Savage Model 42 Takedown, which has one rifle barrel along with a second barrel for shotgun shells.

Most of a single-shot, break-action rifle's operations are done manually by the person using the gun. A release lever is pressed to swing open the action so that one round of ammunition can be placed in the chamber by hand. The action is pressed shut and then the rifle is aimed downrange. The hammer is then thumbed back into the fully cocked position and the trigger pulled to fire the rifle. When the action is opened, an extractor will push the spent cartridge case out of the chamber just far enough for the operator to grasp and pull it out. With the action open and the chamber empty, the rifle is ready to be loaded again.

With their limited ammunition capacity and fairly slow, manually-intensive reloading process, why are these relatively primitive break actions still in production? The trade offs for this more hands-on rifle design is a gun that’s simple (few moving parts), rugged and light weight. They are useful training guns for beginners while being favored by hunters who prefer the challenge of having just one shot to harvest game. Some models can be split in half making them easy to stow in a backpack for hiking, camping or survival situations. While some break actions are fairly inexpensive (under $200), others have been dressed up with hardwood stocks and features that bring the prices in line with bolt-action hunting rifles.

For many enthusiasts, hearing the word “rifle” evokes an image of the gun shown here, a wood stocked, blued steel hunting rifle with a scope and a bolt action. Just about every task that can be accomplished with a rifle has been tackled with a bolt-action somewhere along the line. Although semi-automatics are quite popular today, it could be argued that the bolt-action is among the most successful cartridge firing guns ever produced.

Although they are relatively slow to cycle and usually have limited ammunition capacities, bolt guns are highly valued for their strength, reliability and accuracy. Because of their relatively simple design, they can also be light weight for easy carry. Bolt-actions can be found chambered for just about every rifle cartridge available from the diminutive .22 rimfire all the way up to the earth-shaking .50 BMG. A favorite for casual target shooters and hunters alike, we've recently seen more models intended for extreme long range shooting out to 1000 yards and beyond.

That being said, the most common bolt-actions on the gun racks these days are the timeless angled bolt handle, center-fire hunting rifles which feed from 3- to 5-round internal or removable box magazines. Starting with the action closed, the bolt handle is manually rotated up out of the receiver notch and then pulled back, towards the shoulder stock. The rearward movement of the bolt exposes the chamber (ejecting a spent shell casing if there is one) and cocks the firing pin. Pushing the bolt forward presses a fresh round from the magazine into the chamber. The bolt handle is then pressed back down into the receiver notch in order to lock the action shut so that the gun is ready to fire.

Of all the rifle designs out there, few are considered to be as American as the lever action. Arriving on the scene in time to serve during the Civil War and to play a critical role in protecting pioneers and cowboys alike, the lever gun is as much a staple of Western movies and TV shows as single-action revolvers, saloons and mid-day showdowns. Today the lever-action is still going strong with offerings from well respected manufacturers including Winchester, Marlin and Henry Repeating Arms.

The lever-action rifle gets its name from the manually operated cocking lever located along the underside of the shoulder stock. The fingers of the shooting hand are fitted through the lever's loop to hold it in the closed position as the rifle is fired. The lever is then pressed down, towards the ground, to cycle the action. The lever moves the bolt backwards to eject the spent cartridge case and cock the exposed hammer. Pulling the lever back up into the closed position loads the next round from the magazine into the chamber.

The lever-action has the advantages of easy handling and quick follow-up shots. Working the action is more fluid and intuitive than the up-back-forward-down motion of a bolt-action rifle. They can produce a rate of fire that’s faster than a bolt action (but not as quick as a semi-automatic). However, the fixed tubular magazines require each round to be loaded individually either through a loading gate on the side of the receiver or through a loading port cut into the magazine tube making it slower to reload. The magazines hold five to 10 rounds of center-fire ammunition (depending on the caliber) or up to 16 rounds of .22 LR rimfire ammunition.

Some companies do offer lever-action hunting rifles available with removable box magazines that are chambered for high-power cartridges. However, the majority of lever-actions continue to follow the more compact cowboy carbine configuration. Rifles chambered in .30-30 Win. continue to be popular brush guns for medium-size game including white tail deer and hogs. I'm a fan of the pistol-caliber carbines chambered for revolver cartridges including .45 Colt, .44 Mag. and .357 Mag. Not only are they handy for close range hunting, they are top notch camp and home defense rifles in states that frown on semi-automatic rifles.

Early semi-automatic rifles (the first was successfully developed in 1885) were called automatics, self-loading and autoloading rifles. Machine guns were developed around the same time (the first in 1884) so it soon became apparent that new nomenclature would be needed to clearly identify the differences in the actions. A semi-automatic rifle fires one round with each pull of the trigger. Fully automatic rifles, or machine guns, continue to fire rapidly as long as the trigger is depressed—or until they run out of ammunition. Select-fire rifles usually have three settings: 1 round per trigger pull (semi-automatic), 3 rounds per pull of the trigger (3-round burst), or full-automatic (fires until the trigger is released).

The action of a semi-automatic does most of the work for you. Instead of using a bolt handle or a lever to cycle the bolt, these rifles use the pressure produced by the ignition of the cartridge to work the action. Simply pull the trigger and the rest of the work of maneuvering spent cases out and fresh cartridges into the chamber are done for you. A few semi-automatics feed from tubular magazines but most feed from removable box magazines which speeds up the reloading process. Other action designs cannot match the semi-automatic's speed when it comes to quick follow-up shots

Much like the bolt-action design, semi-automatics have been developed for every niche of rifle shooting. They currently dominate several segments of the rifle market from small game hunting to multi-stage competitions. However, semi-automatics can be ammunition sensitive. If a particular load is not a good fit the rifle will suffer from malfunctions including failure to feed and eject properly. Semi-automatics also tend to sacrifice some accuracy when compared to quality bolt-action rifles. There are three main types of semi-automatic actions, including blowback-operated, gas-impingement and piston-operated but exploring how each type works is a topic for another day.

Hunting the Top of the Everglades Food Chain: the Burmese Python

EAA MC P35 | An Official Journal Of The NRA

Favorite Firearms: A Winchester Model 60A Named “Li’l Ole Bess” | An Official Journal Of The NRA

END_OF_DOCUMENT_TOKEN_TO_BE_REPLACED

How to Report an Overdue Hunter

Preparation, proper gear and an exit strategy are key to a safe outdoor experience, but accidents still happen.

Hunting the Top of the Everglades Food Chain: the Burmese Python

Move over rattlesnake roundups, python hunts are the latest rage.

Bid on one (or all) of these dream hunt packages for the chance at an adventure worthy of NRA Women like you.

3 Animals You Can Hunt This Summer

All the popular hunting seasons are about over by this time of year—but you can still scratch your hunting itch.

END_OF_DOCUMENT_TOKEN_TO_BE_REPLACED

30 Years Of Giving Back | An Official Journal Of The NRA

NRA Women | An Official Journal Of The NRA

thank the women of the NRA, Refuse To Be A Victim, Women On Target
END_OF_DOCUMENT_TOKEN_TO_BE_REPLACED