Lowering the Boom: 6 Useful Devices to Help Manage the Muzzle

Lowering the Boom: 6 Useful Devices to Help Manage the Muzzle

Check out these commonly used accessories designed to mitigate muzzle blast or change how the rifle moves in your hands.

When a rifle cartridge is fired, it releases a considerable amount of energy. That energy takes on several forms, some of which help us to hit our intended targets, and others that hinder shot placement. The type of energy we want from the high-pressure gases produced by burning gunpowder is the kinetic energy that launches the bullet out of the barrel, through the atmosphere and into our intended target.

When these hot, high-pressure gases leave the end of the barrel along with the bullet, they collide with the relatively cold, dense, oxygen-rich atmosphere surrounding the barrel's muzzle. The result of this collision with the air is literally a fireworks display! There's a bright flash of light and a concussive shockwave that produces a loud “boom” as is pushes the barrel, along with the rest of the rifle, backward and upward. These effects are often referred to in the shooting world as muzzle flash, muzzle blast, muzzle rise and felt recoil, all of which can detract from a positive shooting experience.

This is where muzzle devices come into play. Attaching a muzzle device to the end of a rifle's barrel changes its behavior when fired by altering the flow of the propellant gases as the exit the gun. Many of today’s rifles (handguns and some shotguns too) have threaded muzzles. This allows for various muzzle devices to be twisted on to the end of the barrel without the need for a gunsmith.

But which type of muzzle device is right for you will depend on your particular shooting goals. Due to the laws of physics, it's not possible to build an accessory that addresses all muzzle-related issues while remaining both portable and affordable. Instead, muzzle devices tend to be designed to address one or two issues at a time. And like any other firearm upgrade, they have their trade-offs.

Here's a closer look at six of the most popular muzzle devices designed to either mitigate the negative effects of a rifle's muzzle blast or change how the rifle moves in a shooter's hands.

Sound Suppressors
Perhaps the most well-known muzzle devices, thanks to Hollywood, are sound suppressors, which are also known as silencers (both terms are correct). But despite their prolific screen time, sound suppressors are often misrepresented in pop culture. Suppressors don't make firearms silent (they still sound like guns going off), and they're legal to own in many states. Additionally, these devices have practical real-world applications that don't involve spies, trench coats and dark alleys.

Sound suppressors are literally mufflers for guns. Much like an automotive muffler, suppressors are a series of partitions (baffles) that slow down and cool off propellant gases. The result is a big reduction in the concussive force of the muzzle blast, and a reduction in noise levels that helps to preserve the operator’s hearing. For a more in depth discussion, see Sound Suppressors 101.

Blast Deflectors
Blast deflectors are another device intended to reduce the impact of muzzle blast on the person pressing a rifle's trigger. Blast deflectors do not contain the muzzle blast, nor does they reduce the amount of noise a rifle produces the way sound suppressors do. Instead, they focus the shockwave forward and away from the muzzle. This reduction in perceived muzzle blast can make a day at the range more comfortable. 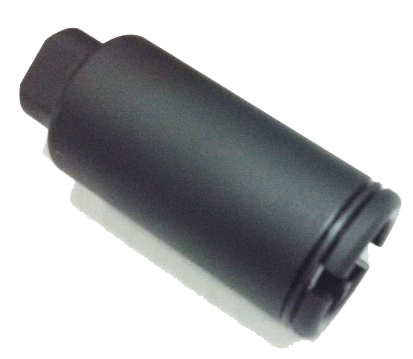 Sound-forward devices tend to be popular for close-quarters combat applications, especially indoors. Some devices are simple, lightweight single-piece designs like the KAK Industries 9 mm Flash Can. Other devices have moving parts that allow them to be tuned or used in conjunction with a flash hider.

Flash Hiders
When the gun powder inside a rifle cartridge is ignited by the primer, most of it burns up before the bullet leaves the barrel, but not all of it. That unburned powder combusts when it hits the oxygen-rich air surrounding the gun. This ignition produces a brief, bright flash of light called “muzzle flash.” How bright the flash is depends on the gun and ammunition combination. But repeated bright flashes from the muzzle can be fatiguing to a shooter's eyes, just like a camera flash. There's also the tactical issue of soldiers fighting in low-light conditions. A bright muzzle flash will give away their position. 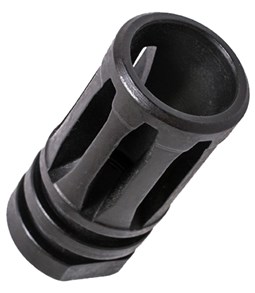 Muzzle Brakes
Newton's Third Law of Motion states that for every action there is an equal and opposite reaction. As a bullet is pushed forward out of the rifle by the explosion of burning gun powder, the same amount of force pushes the rifle backward against the hands and body of the person shooting it. We call this kick to the shoulder “felt recoil.” In small-caliber rifles, like rimfire .22 LR rifles, the recoil is soft and easy to control. This is because it's a little cartridge using a small powder charge to launch a lightweight bullet.  But as the cartridges get bigger, so does the amount of recoil they produce. 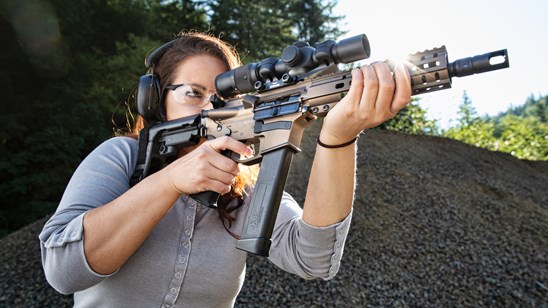 Muzzle brakes are designed to reduce felt recoil by putting the force of the muzzle blast to work in the shooter's favor. Take a look at the CMMG SV Muzzle Brake shown here in use with the company's Banshee 300 AR-15 chambered in 10 mm Auto (which is actually a pistol). The flat, wall-like surface at the front of the brake's chamber is struck and pushed forward by the escaping propellant gases. This forward shove pushes against the muzzle brake counters the rearward movement of the rifle softening the impact with the shoulder. Muzzle brakes are effective with some models reducing felt recoil by as much as 50 percent. However, muzzle brakes are often the opposites of sound suppressors. They can make the rifle's report sound much louder, especially when fired in enclosed spaces.

Muzzle Compensators
As a rifle recoils, the muzzle tends to move upward as well as backward. This is called muzzle rise or muzzle flip. Like muzzle brakes, compensators redirect the muzzle blast using vents or ports. But the vents are not configured to reduce felt recoil per se (although some models do). Instead, they direct the gas upward in order to drive the muzzle down. This counter force works to keep the muzzle aligned with the intended target for quicker, easier follow-up shots and improved accuracy.

Compensators, like the Magnum Research, Inc. .22 LR Comp shown here, are a popular option for folks who enjoy participating in rimfire and center-fire target shooting competitions.

Hybrid Muzzle Devices
The typical rifle only has one muzzle to work with. So why settle for just one muzzle device benefit when a bit of clever engineering can blend the features of multiple devices into one? If you take a spin around the Internet, you'll find all kinds of mixed feature devices including flash-hiding compensators, blast-deflecting brakes and options that reduce recoil and muzzle rise at the same time, like the CMMG device shown here. 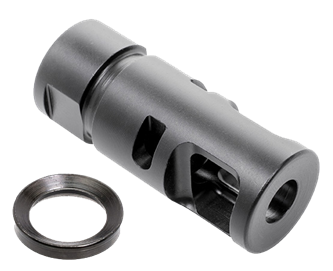 But just like any other multi-function accessory, these mixed purpose muzzle devices are an engineering balancing act. A compensating muzzle brake may compensate better than it brakes, or vice versa. In some cases, the devices are not as well thought out as they need to be, resulting in products that don't fill any roll very well. Make sure to do your homework before you buy and stick with manufacturers that have a reputation for making effective muzzle devices.

American Rifleman | The Burning Question: Are Your Guns Safe in a Fire?

END_OF_DOCUMENT_TOKEN_TO_BE_REPLACED

News, thank the women of the NRA, Refuse To Be A Victim
END_OF_DOCUMENT_TOKEN_TO_BE_REPLACED