New to handguns? The NRA Basics of Pistol Shooting course is your first step in your journey to firearm skills and competency.

As the seats began filling up at the Back Creek Valley Bow & Gun Range in Hedgesville, W. Va., it became evident this was going to be a diverse crowd. There were sons with their mothers, mothers with daughters, singles and couples across a wide range of ages. The one thing they all had in common was a shared goal: formal instruction in basic pistol handling.

For those who may not be aware, the NRA offers a catalog of training courses, from basic pistol and rifle handling to home defense to range safety. The courses are open to everyone regardless of NRA affiliation. A quick search for your area will bring up a list of the courses and when and where they are being offered. They are available in all 50 states and are taught by NRA Certified Instructors.

At the Hedgesville NRA Basics of Pistol Shooting course on a December 2020 Saturday, those instructors were Kim Moss and Mary Ann Head. The class was almost maxed out at 16 students.

“We have definitely seen an increase in the number of people who are wanting to get training,” Moss said of the popularity of her classes over the past year. 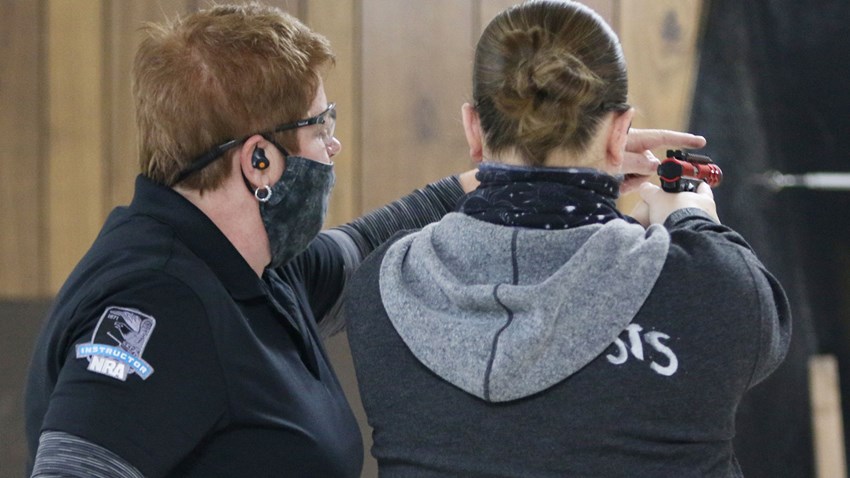 Since West Virginia is a constitutional carry state, a permit to carry a concealed handgun within the state is not required for residents. Consequently, the reasons that most of the class participants said they wanted to attend were centered around wanting formal instruction. The responses came from students, who ranged from a retired federal police officer to a nurse, a computer tech to a geologist.

“I’m not a gun guy, but I believe everybody needs to be trained in using guns,” one participant announced.

“I grew up around firearms, but I want to learn how to safely defend myself,” said another woman.

Other students contributed their motivations: “I mostly have shot rifles and shotguns, but don’t know much about pistols.” … “I had Hunter Safety in school, but now I want to be able to protect my family.” … “I’ve been more into shotgun shooting. What I learned about handguns I learned from John Wayne and Clint Eastwood movies.”

Most participants had fired a handgun at some point in their lives, but a few had not ever handled a firearm. The NRA Basics of Pistol Shooting course fills a day with material that brings students up to speed on safe gun handling, the basic parts of a handgun and ammunition, proper shooting techniques and firearm care. The course concludes with live-fire training on a range. Some states require in-person training that includes live-fire exercises to qualify for a concealed carry permit and the NRA Basic Pistol course meets these requirements.

Some instructors, such as Moss, provide access to all firearms and ammunition. Using a Ruger Mark III or IV, students lined up and fired .22 LR for the live-fire portion of the class. Some participants required extra guidance, which is when it proves valuable to be taught by an in-person, certified instructor. They can spot strengths and weaknesses in a participant’s form and offer coaching. Building a good stance, proper grip and trigger control is where the foundation of good shooting technique starts. Sometimes bad habits are hard to break, especially when students come to the course without realizing they have them. 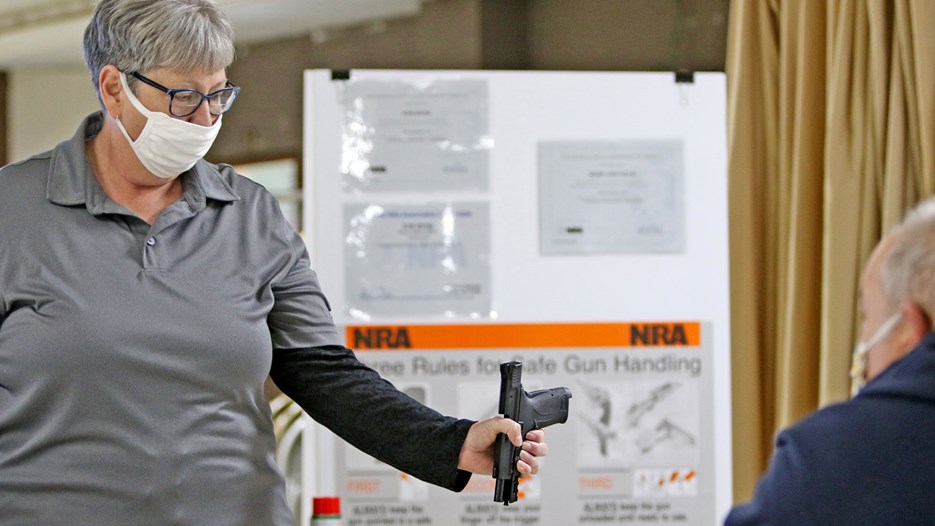 “It’s so important to be taught the right way the first time. Period,” says NRA Instructor and owner of Live Fire Instructionin northern Virginia, Lisa Chau. “I see so many people at the range doing the wrong things—thumbs crossed behind the slide, not being safe. You should invest in education.”

Chau says that about 60 to 70 percent of the participants who sign up for her NRA Basic Pistol are new gun owners. According to Chau, there are three groups of people: anti-gun; pro-gun; and no-gun. “No-gun” doesn’t mean “anti-gun,” just that guns aren’t a part of their lives. She said this was her background. Growing up, her father didn’t allow any firearms in the house, so she didn’t have any exposure to them or experience using them. It wasn’t until she got a part-time job through a friend at a local gun range that she took advantage of the free instructional classes that were offered to her as an employee. She understands the value in seeking out certified instructors. So, the no-gun people have to discover for themselves about firearms through training.

Moss and Head agreed that providing instruction to young and old shooters and new firearm owners is their passion. Despite the restrictions that COVID-19 has placed upon everyone, they felt it was important to continue to offer training during this time. A few adjustments were made. They stopped passing around materials and training aids and began requiring the use of masks and hand sanitizer, which allowed them to still hold the class about 10 times this year.

While Basic Pistol instructor-led courses average about $150, instructor’s costs will vary depending on range fees and whether they provide firearms and ammunition. Students must pass a written test and a nationally standardized shooting qualification while on the range before a certificate is awarded. 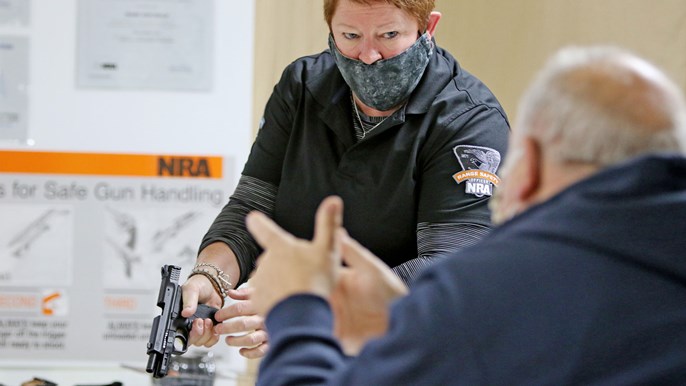 You can sign up for the courses on the NRA’s Training website. The NRA does offer “Distance Learning” options (online only, seminar-style, no range time) and “Blended” courses that split the class into two parts, one part being a self-study of the material and the second part being instructor-led range qualification. If your purpose for seeking training is to obtain a concealed carry permit you should first check the laws in your state as to what qualifies for the permit.

Pregnant or nursing women taking the course who concerned about the safety of their unborn children should check with their physicians prior signing up in order to become educated on the effects of the exposure to loud sounds and airborne lead particulate.

If a new student doesn’t have a gun to bring to class, both Moss and Chau have a variety pistols on hand. While they don’t specifically recommend any specific brand or model of firearm, Chau does give guidelines to students looking to purchasing their first firearm. 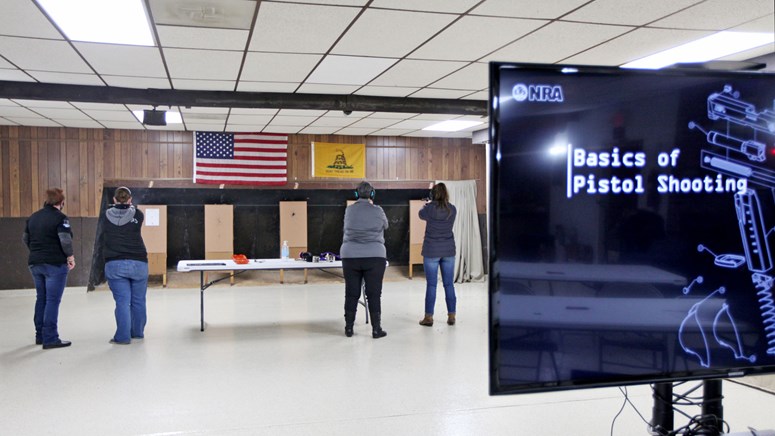 “Buy a modern gun, a black one, not pink or blue. Get one that you are able to take apart and put back together.” Chau says it’s best to avoid the small “spicy meatball” pistols as a first handgun, due to the recoil.

As the Hedgesville class progressed, many students were getting their longtime questions answered: “Do all guns have safeties?” … “Where can I find a cleaning kit for my pistol?” … “Why do some bullets have different shapes?”

It’s a lot to learn in one day—the proverbial “drinking from a fire hose.” But an NRA Basic Pistol course is just the first step in an individual’s journey to firearm skills and competency. These courses lay the groundwork and impart the basic skills that are a gateway to all other NRA training and to a lifetime of safe and responsible firearms ownership.

END_OF_DOCUMENT_TOKEN_TO_BE_REPLACED

News, thank the women of the NRA, Refuse To Be A Victim
END_OF_DOCUMENT_TOKEN_TO_BE_REPLACED