If your state’s gun rights are hanging in the balance due to lengthy waiting periods or mandatory licenses, this story should serve as a wakeup call.

When is the only time it’s OK to enter a gun store wearing a mask?

When the world is experiencing a viral pandemic and you realize you may need to protect more than your face.

Donna Worthy and Casey Jackson, co-owners of Worth-A-Shot Firearms in Millersville, Md., noticed an unusual uptick in store traffic on Friday, March 13, 2020. The sales team is typically busy, initiating paperwork for firearm purchases, conducting fingerprint services, and ushering many more clients through any of its firearm training classes. Among its classes, Worth-A-Shot offers one that satisfies all necessary components, including four hours of training, for the mandatory Maryland Handgun Qualification License (HQL), a prerequisite legislated in 2013 for purchasing, renting or receiving a handgun in Maryland. 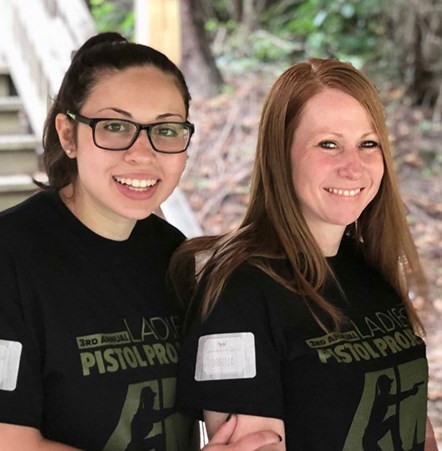 One of many anti-gun bills enacted by former Maryland Governor and one-time presidential candidate Martin O’Malley, the HQL is an expensive and burdensome process that can add weeks to the already onerous gun-buying experience in Maryland. Once Maryland State Police has granted approval—sometimes 30 days after receiving an application—law-abiding citizens must then endure the state’s seven-day waiting period, in effect since 1966. There are some exemptions to the HQL, such as military and law enforcement; others can be excused from the training portion of the HQL if they provide documentation they have completed a handgun fundamentals training class (like those offered by NRA) in the previous three years, or if one has purchased a regulated firearm in the state prior to 2013.

In terms of sales, Worth-A-Shot is the state’s highest-volume gun store, and the crew is accustomed to busy days, especially during its annual “Glock Day,” a day on which they sell hundreds of guns. But something felt different on that Friday. Stories were surfacing about early releases of prison inmates due to the coronavirus, and long lines outside of gun stores in states like California (which suffers a 15-day waiting period for handguns). Was it Maryland’s turn?

As chairman of the national Governor’s Association, Maryland’s Republican Gov. Larry Hogan had been leading the charge in creating state policy on Covid-19. It was rumored that he was about to require social distancing, and also define essential versus non-essential businesses, thereby identifying which types of stores could remain open during a stay-at-home order. Maryland gun buyers were nervous. In contrast to several other state governors,  ultimately the governor made the proper call, deeming gun stores essential and quelling the concerns of customers who had already been counting down their waiting periods for earlier purchases, while creating an impetus to buy for those who had been on the fence. 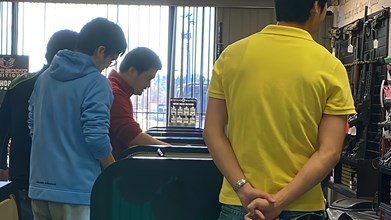 Even before the official order from Hogan was announced, Worthy called the Maryland Secretary of State and asked for verification. “I received a response within the hour,” said Worthy. "For that order to come down, it was very critical.”

What ensued was a sudden surge of panic buying by first-time gun buyers who were willing to wait for hours outside in the cold, wet March days, social distancing in place, determined to buy a gun—even if they didn’t yet know how to use it. “We even had a first-time buyer wearing a Hillary T-shirt!” said Worthy.

But what these gun buyers discovered once they reached the gun counters surprised and angered them, she said.

While the store’s regular clientele “was already prepared,” says Worthy, “most of the first-timers thought you could buy a handgun in Maryland and leave with it right away,” she said. “They thought it was like buying a T-shirt.” When they were advised of the HQL requirement ($179 in fees and a 30-day wait for state police approval), most were shocked.

Impatient new buyers immediately moved on to choosing a long gun—any long gun available—as shotguns and semi-automatic rifles do not fall under the same state waiting-period restrictions as handguns, only requiring a NICS check (National Instant Criminal Background Check). In anticipation of its annual Glock Sale Day in May, the store was well stocked, with 200 long guns, including shotguns, ARs, carbines and hunting rifles on shelves.

“Most people were panic buying and/or buying with extreme urgency,” said Worthy. “They wanted a firearm that they could leave with the same day.”

That process, too, was soon hampered, said Worthy, as the NICS system experienced delays in 70 percent of all applications, citing they were “too busy.” Customers were angry and shocked they had to wait so long, she said.

“These customers wanted a long gun. They wanted a shotgun or an AR-15. When we ran out of those, we even sold out of our hunting rifles.” Worthy says the additional 60 long guns that arrived for the May sale were gone in a day and a half.

The training offered at Worth-A-Shot—a significant portion of the store’s business—was also immediately affected by the Governor’s order. Remember, most of those purchasing handguns during the initial frenzy were first-timers, requiring the four-hour HQL course.

Training was still permitted—but for only nine people or fewer in one class. “My classes are usually more than 50, so it has been a nightmare,” said Worthy, “but I added a lot of dates, doing four in a day if necessary so that my customers can still exercise their rights and I can still follow the Governor’s orders.”

The social distancing order has been mitigated by adding “a zillion class dates!” she said. One HQL class that usually trains 50 people now happens over five or six classes—for the same price. “It’s exhausting,” said Worthy, “but it’s the only way customers can get the license in Maryland.”

In terms of controlling the unanticipated volume of customers, Worthy said they were prepared for a crowd. “We are very used to handling large numbers of people from our sale days—the difference is that only a few can come inside at a time, so that was slightly frustrating,” she said. “But if only I had a crystal ball, I would have ordered hundreds of more shotguns! We sold every long gun we had in two days.”

Now, said Worthy, restocking may take some time. “Nothing is available. The distributors are out of everything. As soon as anything comes in, we sell it, but it doesn’t meet the demand.”

The store remains opened for business, and will soon see hundreds of customers return to complete paperwork and take possession of their handguns. Social distancing remains in place. “We only let five people in the store at a time; the rest wait in line outside the store, keeping proper space between each other, said Worthy. “Gun paperwork takes a while, so they wait a long time outside.”

And those 70 percent of long-gun purchasers who were forced to wait due to NICS system overload? They still needed to come back to pick up their purchase. “People still need to be able to protect themselves, and the amount of panic you see on the news terrifies people. People that have never owned a firearm before or never wanted to now feel the need to buy.”

To further comply with social distancing orders, Worthy said her staff is not performing any gun fittings or showing multiple firearms. “We are selling handguns if customer already know what they are looking for. For sanitary reasons, customers aren’t handling the handguns, so the staff keeps the gun in their possession the entire time.”

The store is also operating under reduced hours, with doors locked, only a few customers allowed in the store at one time.

Fortunately, everyone at Worth-A-Shot still has a job. “No one lost any hours, no one got sick and no one laid off. I’m very thankful for that,” said Worthy.

With time, days at Worth-A-Shot, as with the rest of society, may return to normal. Worthy—a former Baltimore police officer who once was in charge of the department’s firearm training academy—relied on her instinct and training to keep order in her store as they assisted customers in exercising their Second Amendment rights. But it was a wakeup call for her new customers. “A lot of them were very frustrated with all the paperwork and wait time. These were the same people that always voted against gun rights!”

Worthy has some words of warning for those who have previously taken their gun rights for granted, or didn’t understand the restrictive process that prohibits law-abiding Americans from exercising their Second Amendment rights.

“In all my years in this business, all my high sale days, I’ve never seen anything like this,” she said. “People were scared. I had never seen these faces. Hundreds of people who had never been in a gun store and never bought a gun. Hundreds of people who had always voted against gun rights, now mad at those same laws, frustrated at the process,” she said.

She noted that customers waited for more than an hour or longer outside in the rain to get into the store, with the line sometimes wrapping around the building. “They would buy anything available. One, because they wanted it now, out of urgency; and two, because they knew nothing about guns.” On a positive note, Worthy said many of the new buyers, in particular the women​, also inquired about firearm training.

Worthy's daughter, Casey Jackson, says this period of time has proved stressful for the store staff and customers alike. "We want to keep our staff and customers healthy. We follow the Governor's orders, and we want our customers to be able to exercise their rights," she said. "It's a balancing act to do them all, but I think we are making it work."

Worthy said she is sad that the Covid-19 crisis has happened, “but if you have to see any good at all in any of this devastation is that many new people now understand the importance of fighting for our rights,” she said. “I had spent the two weeks prior to this mess testifying in Annapolis against all the new proposed gun laws. ... Now some of those same people fighting against gun rights were mad that buying guns was so difficult!”

Shooting Illustrated | 2020 Gun Sales Have Likely Surpassed All of 2019

END_OF_DOCUMENT_TOKEN_TO_BE_REPLACED

Bear Creek Arsenal has targeted the disease with the sales of this hot pink upper.

Whether you're a serious wingshooter or just in it for fun, trap shooting has it all.

END_OF_DOCUMENT_TOKEN_TO_BE_REPLACED

News, thank the women of the NRA, Refuse To Be A Victim
END_OF_DOCUMENT_TOKEN_TO_BE_REPLACED