My first time deer hunting during the two-day Ohio youth gun season several years ago, I realized that you can’t hunt with a rifle all season. Although every state has different regulations, in Ohio gun season lasts approximately one week with a two-day bonus weekend a few weeks later. The greatest opportunity to hunt whitetail is the four-month September-to-February archery season.

When I realized that I wanted to spend more time in the woods each season, I knew starting in archery was a necessity. Archery equipment varies in style and is quite different from firearms. Bows take game in a different manner; Shot placement is more crucial, and the game is always closer and more personal. While I wanted to learn how to shoot a compound bow, I did not want to invest in something fitted to me that I may not like or never use again. I didn’t know anyone with a bow that would be easy enough to use for practice. Then I discovered the crossbow.

Though treated as a firearm with its own legal season in some states, a crossbow allowed me to become comfortable hunting with an arrow rather than a bullet with a platform already familiar to me. A perfect transitioning tool, the crossbow has sights or a scope, just like a rifle, and a trigger.

In search of a starter crossbow for smaller-framed women and kids, I found the 2020 Wicked Ridge Rampage 360 by Ten Point Crossbows. The crossbow arrived in several pieces, but assembled quickly and easily. Arrows are not included, so I picked up a few carbon ProElite 400 AlphaNock arrows at a local outdoors store.

Encased in a New Peak camo pattern, the Rampage 360 sends arrows flying at up to 360 feet per second (fps) with a power stroke of 13.5 inches. At 35.5 inches with a 14-inch length of pull (LOP), the new air-lite stock was comfortable and fit me, as well as other members of my family, comfortably. It does not come with an adjustable buttplate or cheekpiece, but I found the eye relief perfectly situated where the included scope was already mounted.

Stretching 15 inches wide when cocked, this narrow crossbow is designed for tight shooting situations. At 6 pounds, it is lightweight for carry into the woods—The Rampage was designed to be a premier entry-level crossbow and prioritizes the user’s safety.

The safety mechanism is within easy reach of the firing hand, allowing it to be quickly and quietly flipped before a shot. A fully integrated fore-grip has elongated safety wings that keep the shooter’s hand below the bowstring release path. The trigger guard is fully enclosed, and the bow is equipped with Ten Point’s dry-fire inhibitor (That just means the strings will not fire if an arrow is not nocked and the trigger is pulled.). 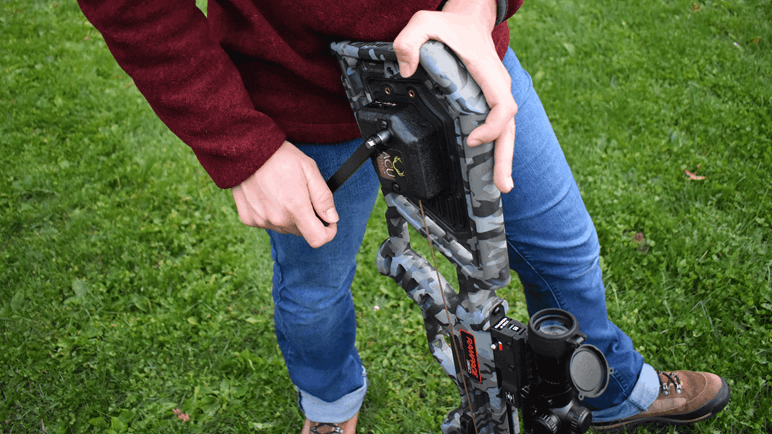 The Rampage 360 is the first value-priced crossbow to ever be offered with a built-in cocking device. The ACUdraw crank is invaluable, especially for new hunters, inexperienced bow hunters, youth and those who may lack the strength required to draw a more traditional-style bow. The ACUdraw reduces the draw weight to cock the crossbow 95 percent, from 175 pounds to approximately 8.75 pounds. The Rampage 360 is also available with the ACUdraw 50 system, a rope-cocker style cocking device that reduces the draw weight by 50 percent, to approximately 87.5 pounds. The ACUdraw allows me to easily cock the crossbow without much movement. Personally, I feel much more comfortable using the ACUdraw in a tree stand than I would any other style.

Though a bit confusing at first, everything needed to use the crank is attached to the crossbow. The crank mechanism is built into the bow with the handle stowed neatly underneath the buttstock, unlike other bows where you have to carry a separate cocking rope and remember it every time. It took a few times to fully understand how to operate it, but a switch on the rear allows you to disengage the ACUdraw to pull the cocking device and rope forward and attach it. Once the piece is locked on, engaging the device allows you to turn the crank until the drawstrings move the safety from the fire to safe position. Note that the crossbow must be fired to de-cock it. Remember to keep a separate arrow than you use for hunting to de-cock the bow.

A single-stage 3.5-pound trigger is non-adjustable but runs smoothly. The Rampage 360 also comes with a three-arrow quiver and TenPoint multi-line scope. The scope arrives already mounted on the bow and pre-zeroed to 20 yards. I verified this and it was close, but depending upon the arrows and tips you use, it can vary. Elevation and windage knobs allowed for adjustment, but the close distance resulted in any adjustment requiring a considerable number of clicks. The elevation knob is clearly marked, unlike the windage knob which requires a dive into the instruction manual to find. Once you do find it, the windage knob follows industry standard scope rotation (Left is clockwise; Right is counter clockwise).

The multi-line scope is not illuminated but has four horizontally stacked yardage selection lines spaced in 10-yard increments from 20 to 50 yards. (The top line is 20 yards). Be sure the arrow retention spring is centered on the arrow each time. Surprisingly, broadheads showed more consistent accuracy than field tips for me with the ProElite 400 arrows, but the slight differences in precision would have still ethically taken down a deer. 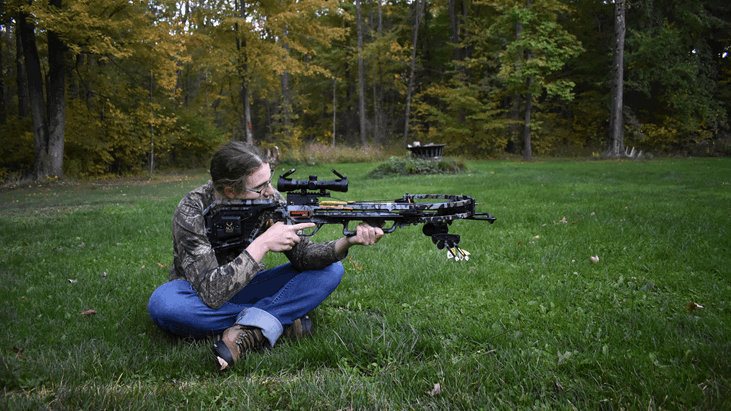 Overall, it surprised me how easily I adjusted from shooting a firearm to shooting the Wicked Ridge Rampage 360 by TenPoint. It is a quality crossbow with features unavailable with other crossbows at the same price point. Choosing a crossbow with a built-in cocking device not only gives you one less thing to keep track of, but also allows the crossbow to be passed between people of different sizes and strengths. This is ideal for mentoring new hunters in the outdoors.

NRA Family | How to Choose Eye & Ear Protection For Shooting

END_OF_DOCUMENT_TOKEN_TO_BE_REPLACED

News, thank the women of the NRA, Refuse To Be A Victim
END_OF_DOCUMENT_TOKEN_TO_BE_REPLACED