Thursday, October 15, 2020 kicked off the sixth annual She Never Quit (SNQ) three-day women’s shooting and fundraiser event, presented by the Women’s Outdoor Media Association (WOMA) and the WOMA Foundation. Fifty-eight women arrived from across the United States for a weekend of camaraderie and outdoor activities while raising funds for The Foundation for Women Warriors, Team Never Quit and Trinity Oaks.

The just-for-women SNQ event had previously been hosted by Melanie Luttrell and the Juneau family at the Lazy J Ranch, but due to COVID-19, it was moved to the Trinity Oaks Thumbtack Ranch. This relocation brought a new opportunity for SNQ’s fundraising efforts, as well as a safe and spacious location for attendees.

Trinity Oaks is a Texas-based not-for-profit organization that seeks to provide life-changing outdoor experiences to children, families and veterans. Trinity Oaks has helped more than 3,000 impoverished families and sick children and more than 1,000 military veterans find healing in the great outdoors. They also provide homeless shelters and food pantries across Texas with monthly deliveries of nutritious game meat.

Excited about the new cause and a weekend of fun activities, attendees arranged to carpool from the San Antonio airport to the ranch, just two hours away. The WOMA board and volunteers arrived early, clearly marking the road to the ranch and providing a smooth check-in process. Attendees received temperature checks, Gun Goddess swag bags and their cabin assignments to kick off the event. It felt like summer camp as new arrivals couldn’t even park their cars before being greeted by their SNQ friends from last year.

Many women have been attending She Never Quit for years, but most newcomers found the event through Facebook. Melanie Luttrell, the original host, the talented firearms instructors involved, and WOMA board members all pitched in to recruit attendees through social media. Returning women and newcomers alike were attracted to the opportunity to improve their skills, meet like-minded women and support the great causes.

After settling into their cabins, each equipped with its own restroom, the women began to mingle. Bonds began to form not only between cabin mates but among those who were previously strangers. As the event continued and as everyone learned more about each other, it was not uncommon to hear proud shouts of “That’s my roommate,” or “She was in my shooting group,” as the individual women unveiled their talents and skills. 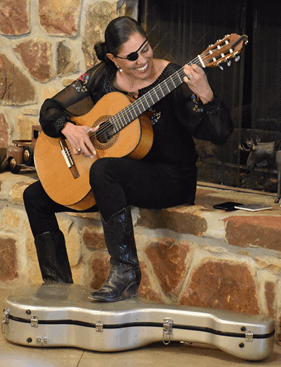 The highlight of the event for many was the chance to meet Dr. AnnaMaria Cardinalli—also known as “CC” or Sister AnnaMaria Cardinalli of St. Catherine’s Order. “Everyone was completely blown away by her intellect, kindness and talent,” said professional shooter Maggie Reese. An operatic contralto, Spanish concert guitarist and author, CC was also a cultural specialist embedded with the U.S. military in Afghanistan. “She uses her music to tell of her time overseas and the lessons she learned. She is simply amazing,” added Reese.

Participants journeyed to various ranges and shooting bays on Friday and Saturday morning—rotating among four stations in small groups. Each station had something unique to offer. One station featured rifles and PCCs from Ruger, Tikka and Henry as well as pistols, a shotgun and firearms from Patriot Defense.

A shotgun station manned by instructor Elizabeth Lanier Fennell turned out to be one of the favorites. Several attendees with limited firearms experience discovered a love for shotguns at Fennell’s station, opting to spend extra time with her in the afternoons to hone their skills. 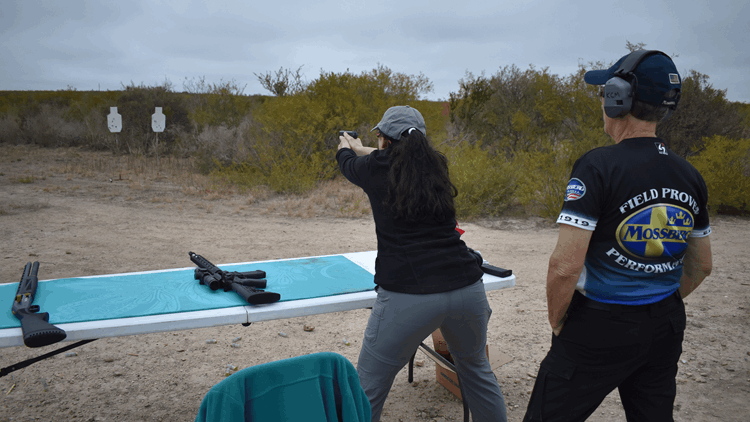 A dedicated pistol station with firearms from Staccato 2011 and Glock, plus a three-gun station sponsored by Mossberg, rounded out the experience. By the end of the weekend, attendees had the opportunity to fire 51 different firearms, including a .50-caliber rifle provided by Gun Rodeo.

Afternoons offered time for various activities including fishing, kayaking and archery alongside Buck Knives' hatchet- and knife-throwing areas. Reflex Protect offered a self-defense seminar and Brianne McEwen, a Trinity Oaks volunteer, gave lessons on deer skinning, quartering and deboning, giving some women newfound confidence to go hunting on their own.

Over the course of the event, attendees had the opportunity to participate in a raffle, silent auction and live auction with proceeds going to The Foundation for Women Warriors, Team Never Quit and Trinity Oaks. This event would not have taken place if not for the dedicated work of the WOMA board and volunteers, Trinity Oaks and generous sponsors.

Everyone walked away a more confident shooter with more friends than they had before. Christina Ray, a Trinity Oaks volunteer, said her favorite part of the event was meeting “so many capable and interesting women. All the ladies came from so many different backgrounds with different skills, yet came together and worked so hard to empower and teach others.”

Valerie Hoperich, owner of Queen Charlotte Safaris, came into the event as a self-proclaimed firearm “newbie.” Now, she plans to return in 2021, and bring her friends along with her.

END_OF_DOCUMENT_TOKEN_TO_BE_REPLACED

News, thank the women of the NRA, Refuse To Be A Victim
END_OF_DOCUMENT_TOKEN_TO_BE_REPLACED