Have fun and become a better wingshooter with this shooting sport.

Of the three main clay-target shooting sports in America—trap, skeet and sporting clays—skeet seems to be the least popular of the three with new shooters. That’s unfortunate, because skeet is a great way for a newcomer to learn to shoot clays, as it quickly teaches you how to lead a target.

The game of skeet was developed in the early 20th Century to simulate shots encountered by wingshooters when hunting various species of gamebirds. The term “skeet” was first adopted as the official name for the game nearly a century ago, in 1926, as a result of an outdoor magazine contest to name the new sport. The contest winner, Gertrude Hurlbutt (yep, that was the lady’s real name), earned $100 for her winning entry—quite a chunk of change back then. The word “skeet” allegedly derived from the Norwegian word for “shoot” (skyte). Skeet shooting has since become an Olympic sport. 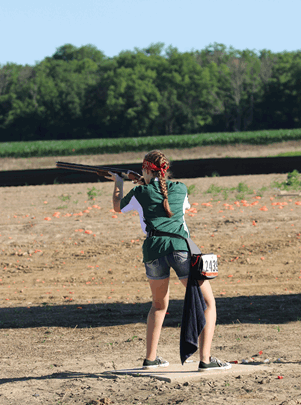 Before describing the game of skeet in detail, let me first describe trap and sporting clays so you’ll be aware of the differences. In trap shooting, there is a single target house. Five shooters—known as a squad—stand behind it 16 yards away in a semicircle. Targets are always thrown away from the shooters. Upon the word “pull” by the first shooter, a target is thrown and fired upon by that shooter. The next shooter in line then does the same. The shooters take turns shooting, one shot per target, until five shots have been taken by each shooter. The shooters then rotate to the next shooting position. Once a shooter has rotated through all five shooting positions and taken 25 shots, the trap round is considered complete.

Unlike trap and skeet, there is no standard sporting clays course. Instead, sporting clays ranges take advantage of the topography upon which they are built. Often described as “golf with a shotgun,” a sporting clays range has anywhere from about a dozen to possibly as many as 20 shooting stations. Shooters rotate through these many stations as they would holes on a golf course, shooting either singles, doubles or a combination of those targets at each station. A major fun factor in sporting clays—which shooters seem to relish—is that targets can come from any angle relative to the shooter, 360 degrees. “Rabbit” targets even bounce along the ground. A sporting clays round consists of either 50 or 100 targets.

Skeet is a bit more complicated in its design and the way it’s shot, so I’d suggested that on at least your first visit to a skeet field you go with someone who is familiar with the game. To help simplify things, keep in mind that while trap targets are thrown away from a shooter, and sporting clays targets can fly in any direction, skeet targets are always thrown either right to left or left to right. Their direction and speed never vary, which should make the shooting easy, right? But wait, there’s more…

A skeet field has two target houses, one built taller than the other, so the targets are thrown at different levels. The one on the left corner of the field is known as the high-house and the one on the right corner is the low-house. Eight shooting stations are spaced in a fan configuration between the two target houses. A shooter shoots either single targets or a combination of single and double targets at each shooting station. A round of skeet consists of 25 targets.

The following chart is a standard skeet round listed by shooting station. As a beginner, don’t feel obligated to have to strictly follow this chart your first time or two out. Rather, it’s okay, if you choose, to just shoot a few targets at each station to get a feel for the game and how the targets fly: 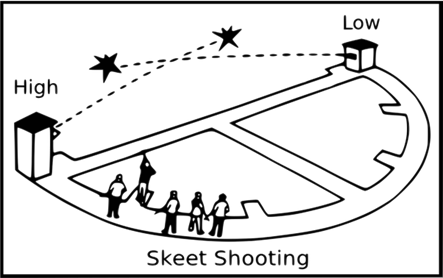 Note: The “option” target is shot after a shooter’s first missed target, and is immediately shot from the same shooting station where the miss occurred. If the shooter has broken all 24 previous targets, the Station 8 low-house target is shot again for a total of 25 targets.

Most skeet shooters use 12-gauge shotguns, but 20-gauge scatterguns are popular, too, and reduce recoil. For ammunition, light target loads containing #7.5, #8, or #9 shot is all you’ll need. In fact, for safety reasons, most clay-target ranges prohibit shot sizes larger than those three mentioned.

As for a skeet shotgun’s action, consider either a hinge-action over/under or a semi-automatic. The idea is to have a gun that can fire two successive shots quickly, which you’ll need for double targets. Skeet can be shot with a pump-action, but you will be handicapping yourself significantly. What choke tube should be screwed into the end of a skeet shotgun’s barrel? Why “skeet” of course. Lastly, don’t forget your eye and ear protection, and take along a hat with a brim, too. (Unless your name is Gertrude Hurlbutt, in which case you should do as you please.)

NRA Family | Defensive Shotgun Accessories: What Do You Need?

END_OF_DOCUMENT_TOKEN_TO_BE_REPLACED

News, thank the women of the NRA, Refuse To Be A Victim
END_OF_DOCUMENT_TOKEN_TO_BE_REPLACED