Here’s what to do if your groups look like a connect-the-dots game.

As I walked toward the handgun range, I saw my student waiting for me. She looked very young and seemed a bit tentative. When I meet a student for the first time, I always ask why they hired me—for target practicing or for self-defense. She told me that she recently accepted a position as a bartender in a rough section of a nearby city, and would often leave work about 2 a.m.

Just a few weeks prior, after her shift, a drunk guy followed her to her car. Her co-workers suggested she purchase a small firearm to carry on her “just in case.”

She purchased a 9 mm Taurus, but had never shot it. After giving her a basic lesson, she lifted the gun and fired at the “bad guy” target. Startled, she stopped after the first shot. I told her to keep shooting until her magazine was empty. When we walked down to retrieve the target, we saw that she came close to the bullseye twice, but the rest of her grouping was scattered all over the target. A widely scattered grouping is typical of the beginner shooter, or someone breaking in a new gun. I told her to just practice, practice, practice!

Read on to find out how you can diagnose and correct the following grouping issues: no group, vertical center and horizontal center placements. Please note that the following information assumes a right-handed, right-eye-dominant shooter. For left-handed shooters, reverse the groups. 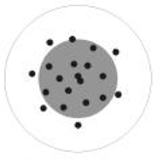 Scattered or no group. If you’re new to shooting or shooting a new gun, your shots could be splattered all over the target. No group means all problems are evident, and that no one specific issue stands out from the rest. The goal of target shooting is to have a grouping no larger than your closed fist. Check the basic fundamentals of pistol shooting: grip, sight alignment, breath control, trigger control, stance and follow-through to tighten your groupings. 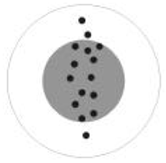 Vertical center placement. In this pattern, your shots are running down the center of the target, from twelve o’clock all the way down to six o’clock. Very few are landing at the three o’clock or the nine o’clock positions. This is usually caused by an incorrect stance, especially swaying forward and backward. To correct this, have someone go with you to the range to check your stance while shooting. Be sure to relax your shoulders, as this can also cause vertical placement. Finally, hold your breath while shooting, as breathing while aiming and firing can cause you to move the gun up and down. 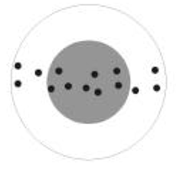 Horizontal center placement. This shot pattern is the exact opposite of vertical center—your shots are landing left to right across the target. But here’s the funny part—the advice is the same! Poor stance often results in a bad point of aim. To make this pattern, you may be swaying to the left and right. Finally, check your grip. Poor grip can cause your grouping to the far left or the far right of the target.

About the Author: Maureen Sangiorgio is an NRA Certified Firearm Instructor/Range Safety Officer. She can be reached directly at maureenwriter.com.

Shooting Illustrated | Learning From Your Failures in Training

END_OF_DOCUMENT_TOKEN_TO_BE_REPLACED

News, thank the women of the NRA, Refuse To Be A Victim
END_OF_DOCUMENT_TOKEN_TO_BE_REPLACED