Just before the Iron Curtain fell, these four women proved the value of female sharpshooters.

Desperation is the mother of invention, and when "Mother Russia" was fighting alongside America to defeat Adolf Hitler, they were pretty desperate. The Soviet Union needed every able-bodied adult to fight...and that included women. The Soviet Union used approximately 2,000 female snipers during ​World War II, which turned out to be a wise decision. Some of those women became history’s most accomplished precision shooters. What's more, Soviet women fought on the front lines, driving tanks, shooting guns and marching into battle with the men.

Women were particularly adept at reconnaissance, camouflage and sniper shooting. Military officers were quick to note that women showed greater patience and maturity necessary for stealth and precision than the men their same age.

Snipers were essential in World War II. The front took so many lives that officers were not easily replaced; taking out an important official was a serious blow to the enemy. Snipers traveled in pairs—one to spot and one to shoot—and attempt to get as close to their target as possible while remaining hidden. Opposing armies would even send their snipers out to track down enemy snipers. The pairs could stalk each other for days. Here are four of the greatest female snipers of the 20th century, all of whom broke the "Iron Ceiling" and paved the way for future women in the armed forces. 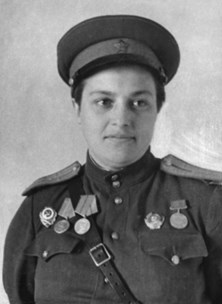 Lyudmila Pavlichenko
Pavlichenko volunteered to join the army at Russia's entrance into the war in 1941. At first she was shrugged off and told to try nursing instead. However, she simply went back the next day and the new person running the desk enrolled her in the 25th Chapayev Rifle Division.

After only 11 months, Pavlichenko had 309 confirmed kills. 36 of those kills were enemy snipers that she outmaneuvered. One three-day long mission to take out an opposing sniper ended abruptly with Pavlinchenko’s victory which she credited to the enemy sniper making “one move too many.”

Pavlichenko caused real problems for the German army. They threatened her, offered her chocolate and promotions, and threatened her some more in an attempt to get her to give herself up. Her own superiors were not blind to her accomplishments; she was promoted and publicly praised for her efforts. Her longstanding reign of fear over the Germans—they called her “Lady Death”—came to an end when she was severely injured on the battlefield. Her reputation grew globally, however, and she even befriended Eleanor Roosevelt. 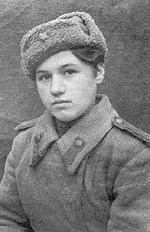 Klavdiya Kalugina
Among the youngest female snipers who fought in World War II, Kalugina was just 17 when she completed sniper school and was sent to the front. She fought alongside her partner and best friend, Marusia Chikhvintseva. However, she lost Chikhvinsteva to an enemy sniper stalking them. She was forced to keep her sobs quiet as to not give away her entire battalion. Kalugina’s kills are difficult to determine due to record keeping and the dangerous logistics of verification. She had at least 28 confirmed kills, making her one of the deadliest female snipers of World War II. 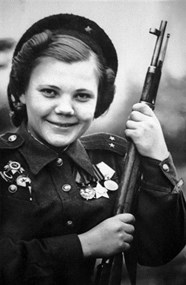 Nina Lobkovskaya
Lobkovskaya lost her father to the war in 1942. After graduating school, she enlisted in 1945. She fought at the front until the end of the war and even commanded a company of female snipers. Lobkovskaya had 89 confirmed kills over her seven month career and her unit once captured 27 German soldiers in a single mission. 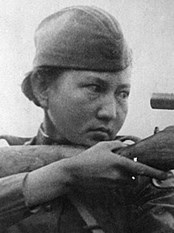 Aliya Moldagulova
Orphaned at a young age, Moldagulova was only 19 when she joined the army in 1943. Famously, while under siege, Moldagulova turned to find that her commander was gone. She bravely took command and gave a battle cry, “Follow me!” as they overwhelmed the enemy’s position. She died in combat just two weeks later and she was posthumously awarded Hero of the Soviet Union. She is credited with 91 sniper kills.

Sadly, it took America longer to recognize the potential of female sharpshooters. In the United States, women-only branches of service were created for wartime. However, these women weren’t charging into battle alongside the men like their Soviet sisters. They were employed in clerical positions such as ground-control and linguists to free up able-bodied men for the front. After the war was over, they were discharged, unemployed and unrecognized. It wasn’t until 1948 that women were able to serve as full-time members of the armed forces and it took another 65 years for women to be eligible for combat.

END_OF_DOCUMENT_TOKEN_TO_BE_REPLACED

How to Concealed Carry With a Belly Band Holster

Belly bands are great for on-body CCW with the right wardrobe.

Halloween at the Shooting Range

Plan a spooky shooting adventure for your friends and family.

END_OF_DOCUMENT_TOKEN_TO_BE_REPLACED

News, thank the women of the NRA, Refuse To Be A Victim
END_OF_DOCUMENT_TOKEN_TO_BE_REPLACED