8 Reasons to Check Out the Taurus G3c 9 mm Pistol

8 Reasons to Check Out the Taurus G3c 9 mm Pistol

This latest addition to the company's G series of semi-automatics is comfortable to carry, easy to operate and affordably priced.

One of the most successful pistols made by Taurus has been the G2c, a sub-compact semi-automatic 9 mm trimmed down to a just right size and ammunition capacity for concealed carry. This year Taurus is launching the updated G3c version with upgrades inspired by customer feedback. Manufactured in Brazil with a design that is clearly based on its predecessor, this pistol features improvements to the slide, sights and controls that concealed carry practitioners have been waiting for. 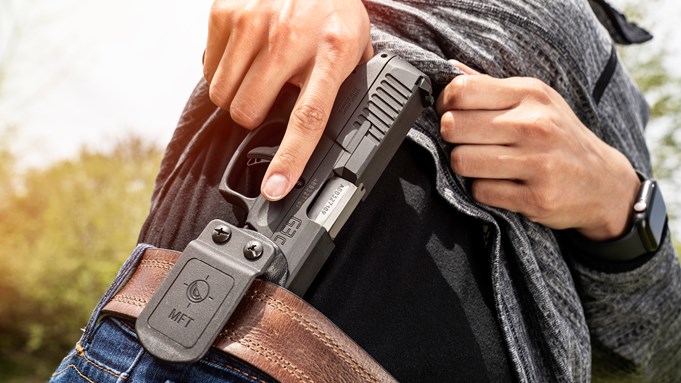 Just Right Size
There was a point at which the gun industry was focused on shrinking defensive handguns just as small as possible for easy concealed carry. But exceptionally small 9 mm pistols have two drawbacks: increased recoil and small grips that can be hard to hold on to. With external dimensions comparable to those of the Glock G26, the G3c has a hand-filling grip, a dual spring recoil assembly and enough metal in the slide to help manage felt recoil. It's also easy to find suitable holsters for comfortable concealment like the DeSantis Inner Piece 2.0 inside-the-waistband holster.

How many rounds of ammunition a particular 9 mm pistol can hold is a hot topic of discussion this year. Single-stack models offer ammunition capacities ranging from 6+1 to 8+1 rounds. For 2020, there has been a big advertising push for small concealed-carry models with 12-round magazines. The G2c offered a standard 12+1 capacity before it was the in thing. The G3c ships with three 12-round magazines, instead of just one magazine like some budget priced models. 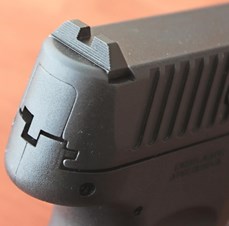 The polymer sights used on the G2c have been replaced with an all-steel sight system. The white dot front sight is paired with a serrated square notch rear sight which dovetails into the slide so as to be drift adjustable. Taurus recognizes that many concealed carry practitioners are swapping out factory iron sights for fiber optics or night sights. To make this process easier for customers, the G3's dovetail and front sight port are compatible with sight upgrades made for Glock pistols. 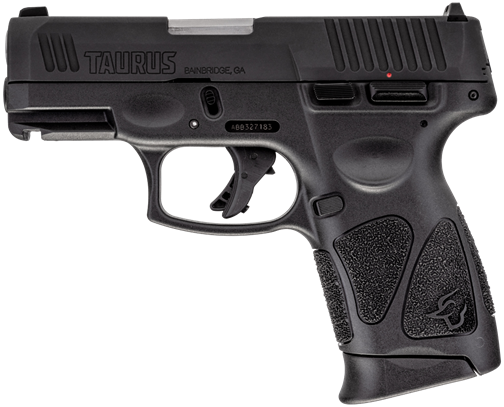 The carbon steel slide has been upgraded from a typical blued finish to a Tenifer finish, which has a proven history of scratch, wear and corrosion resistance. The external controls, including the takedown lever, slide stop, magazine release button and the thumb safety are all metallic instead of polymer. Like the slide, these controls now have an upgraded finish. They've been treated with black Teflon which is not only corrosion resistant but also increases lubricity for smoother control operation

Easy-to-Operate Slide
The cut outs at the front end of the G2c slide look stylish but don't provide much to grab on to. The G3c slide has a squared-off profile that allows for front and rear cocking serrations. This is a plus for those who prefer to manipulate the slide from the front end. The slide’s nose is beveled for easier re-holstering while the back end is nicely rounded to match the contours of the frame. The two-piece, dual spring recoil assembly uses all-steel supports instead of a mix of steel and polymer like some models. It provides plenty of support while allowing the slide to be manually cycled with ease. Although the slide is not quite as light as the Smith & Wesson M&P Shield EZ 9 mm (I had one on hand for comparison), it comes close. 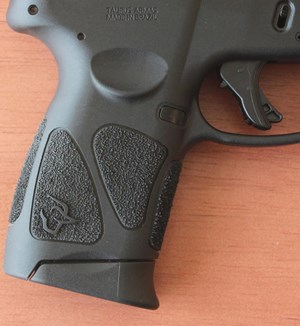 My experience has been that how well a pistol's grip fits a shooting enthusiast’s hands will have a direct impact on how often they'll be willing to practice with it. Some striker fired pistols suffer from bulky or blocky feeling grips. Taurus went out of their way with the G3c grip frame to make sure it would be a good fit for a variety of hand shapes, including somewhat smaller hands like mine. The grip's backstrap extends down behind the base plate of the blued steel, double-stack magazine. This helps to protect the shooting hand from getting pinched during reloads and prevents the base plate from nibbling at the palm when the pistol recoils.

Taurus opted for an all or nothing grip texturing approach with this pistol. The touch points of the G3c's grip are smooth except for six molded in panels that are aggressively textured with rough-grit feel comparable to skateboard tape or sand paper. But the texturing is isolated to those points on the palm and fingers of the shooting hand where added purchase is most needed. In a defensive situation, when we may be wearing gloves or our hands may be wet or cold, this kind of texturing is a real plus. The base plates of the magazines provide a built-in finger rest so that all three fingers of the shooting hand are supported.

Upgraded Trigger
One of the reasons striker-fired semi-automatics have become so popular is a consistent trigger pull. But not all striker triggers are created equal. Some have a mushy, indistinct feel. The G3 series features a new trigger system that feels like it belongs on a more expensive pistol. It has a light 2-lb. takeup with a firm stop before breaking cleanly with 4 lbs. 10 oz. of trigger pull. The trigger comes to rest against the frame and only needs about a quarter inch release in order to reset. The result is a trigger that feels tuned instead of factory installed with a short reset that aids in quick follow-up shots. 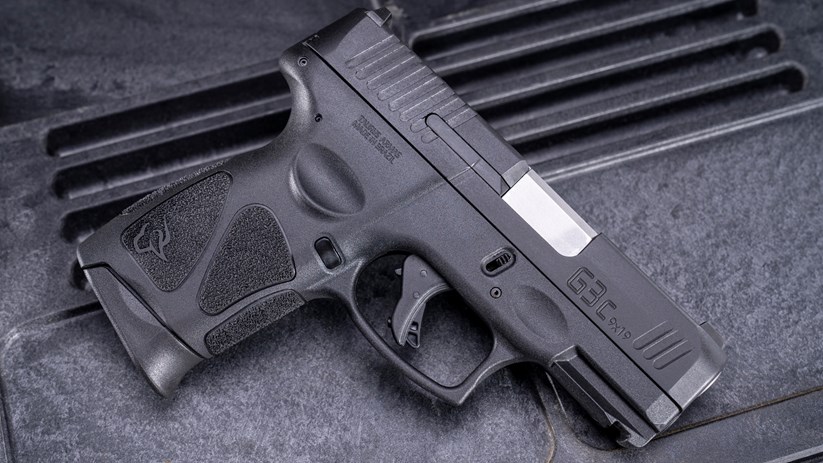 This pistol's ignition system provides what the company calls a second strike capability. Some cartridge primers are harder than others and may not ignite the first time the firing pin hits them. The G3c trigger allows you to cycle the trigger a second time to strike the primer again. This feature is not available on many striker-fired pistols. 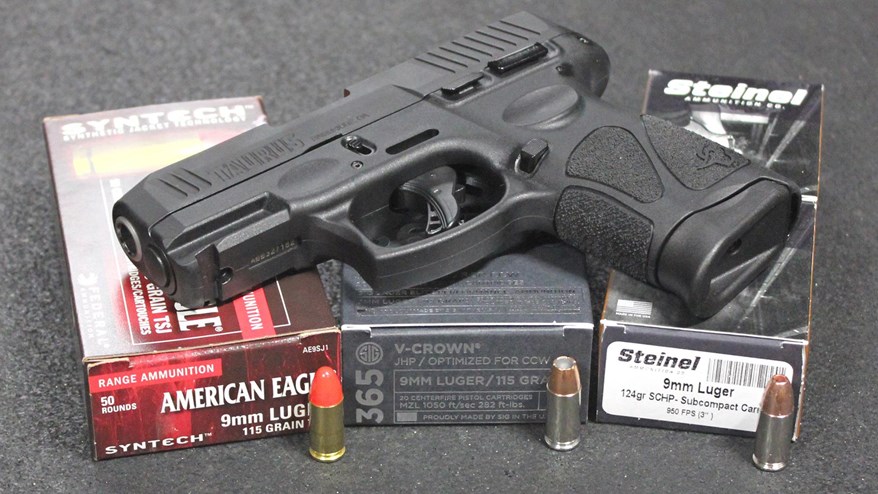 Affordably Priced
In the past, Taurus has wrestled with quality-control issues. But last year, the company released several models that proved to be well made and reliable while remaining reasonably priced. I was hoping to see the same level of commitment to consistent quality control in the G3c, and I was not disappointed. Currently the G3c is available in an all black finish but the company will be offering additional frame and slide colors down the road along with 15- and 17-round magazines. With its upgrades and a suggested retail price of $305.74, the G3c is well positioned to compete with popular concealed-carry 9 mm pistols that cost more at real-world prices that fit most budgets.

END_OF_DOCUMENT_TOKEN_TO_BE_REPLACED

News, thank the women of the NRA, Refuse To Be A Victim
END_OF_DOCUMENT_TOKEN_TO_BE_REPLACED