The CCW course is believed to be one of the largest women-only concealed-carry gun certification classes ever held in the state of Ohio.

On a cold Saturday morning in early 2020, 179 women filled the basement of New Prospect Baptist Church in Roselawn, Ohio, not for prayer or Bible study but rather to attend a day-long Carrying a Concealed Weapon (CCW) course. Providing the handgun training—including live-fire training—were a half-dozen instructors from the Queen City-based Arm The Populace. 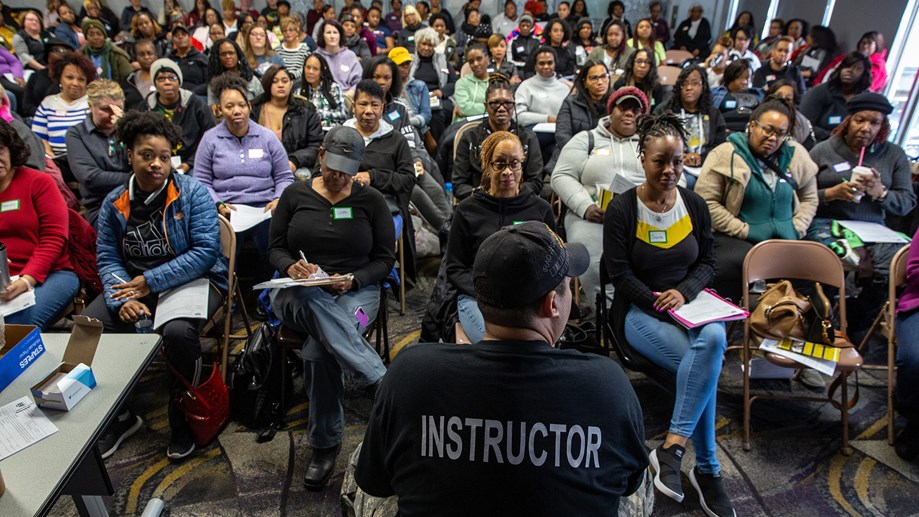 “We at Arm The Populace do not care about the color of your skin, nor who you choose to love, nor what invisible entity in the sky you pray to,” said Doug Cooper, founder. “We believe personal defense is a basic right for everyone. And we support safe and responsible gun ownership and positive interaction with law enforcement.”

A native Cincinnatian, Cooper has an interesting background. As a graduate of the University of Cincinnati (2007) he holds degrees in both Literature and History, with minors in Theology and Philosophy. Since college, he has been a corporate trainer and U. S. Treasury Agent. Cooper is also a United States Concealed Carry Association (USCCA) Certified Arms Instructor, NRA Certified Arms Instructor, and an NRA Chief Range Safety Officer.

“I believe self-preservation is a person’s personal responsibility,” said Cooper. “To aid a person in that responsibility, I founded Arm The Populace in 2012.”

The CCW course held at the church is believed to be one of the largest women-only concealed-carry gun certification classes ever held in the state of Ohio. A subsequent newspaper story in the Cincinnati Enquirer, written by attendee Sharon Coolidge, stated, “Over and over, the women cited the same reason for coming to the class. They were tired of being scared—of guns, of being alone in a home, of walking in some neighborhoods.” 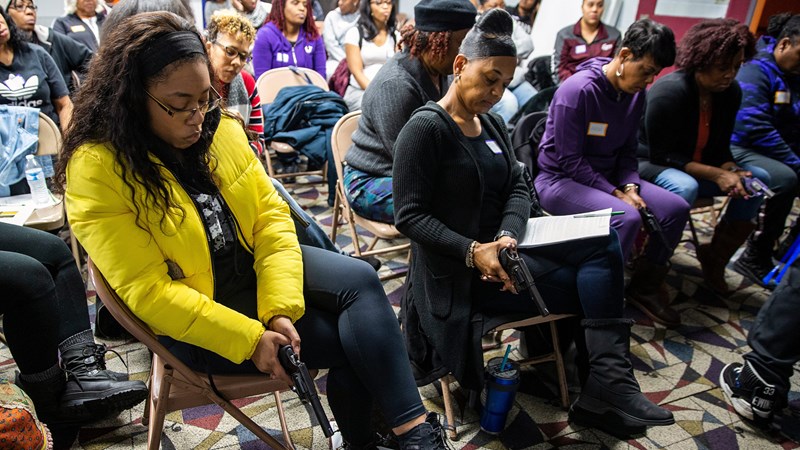 The church is home to one of the largest predominantly black congregations in Cincinnati, with 169 of the 179 women attending the handgun course being African-American. The course was organized by Jeff Pastor, a black Cincinnati City Councilman who holds an Ohio CCW permit. Jeff’s wife, Tara, a stay-at-home mom with four kids, was one of the African-American women attending the CCW course.

“I did not have any previous experience with firearms,” Tara said. “In fact, I’d never even fired a gun before. Going into the class I was excited, yet also a little nervous not quite knowing what to expect. I approached the course looking forward to becoming more comfortable around guns and learning as much as I could.”

Tara said she was surprised by the variety of handguns, ammunition and other. “During the day the instructors allowed us to practice loading and unloading the handguns, which was very helpful and much easier than I thought it would be,” she said.

When asked how the live-firing segment of the course went for her, Tara laughed. “I need more practice!” she said. “But having shot a gun now, I have a certain sense of confidence that I didn’t have before … more of a feeling of security knowing that I can shoot a handgun safely and not be afraid of it.”

Tara said the experience also made her want to encourage other women in her family, as well as her friends, to attend a firearms safety course. “I’m guessing that most of the women who took the course left with similar feelings to mine,” she said, “of confidence and empowerment.”

Tara had high praise for the ATP Instructors. “They were super down-to-earth, fun, entertaining and very informative. But at the same time not intimidating,” she said. “They took the time to answer all our questions, and were very forthcoming with information. They did a wonderful job of making all the ladies feel comfortable.”

As a result of the CCW course, Tara and Jeff Pastor are soon planning to take their children through a family handgun-safety class with ATP. 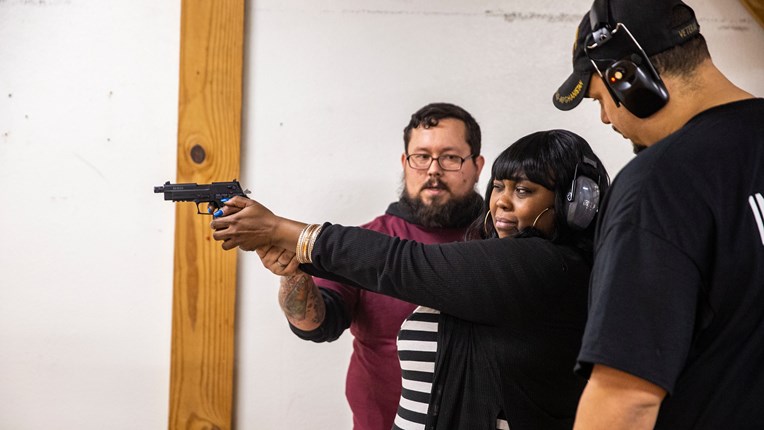 Kai Brown of Bond Hill gets instruction on how to hold a gun from Timm Penrod & Henry Ware with Arm the Populace during an all-female concealed carry and weapons class at New Prospect Baptist Church, 2/8/2020 © Cara Owsley – USA TODAY NETWORK

ATP holds its handgun courses in various venues from motorcycle clubs to churches. Lately, some of those venues have even included women’s salons. “Hair and beauty salons are usually closed on Sundays, which makes them available for handgun courses,” said Cooper. “Women are often more comfortable at a salon because they know it’s not a typical man’s hangout, so are more apt to attend.”

Cooper went on to explain that ATP’s CCW courses—for men or women—have two main goals: Students learn the basics of how to safely handle and shoot a handgun, and they learn the laws that pertain to carrying a concealed firearm in the state of Ohio.

Obtaining a CCW permit should be just the beginning of your handgun training, not the end of it.

Bill Maltbie, one of ATP’s main instructors, teaches both the basic and advanced handgun training courses. “In our advanced-handgun classes for women, there is no difference in the content taught compared to a men’s course or a mixed course,” he said. “During the first hour, we review and practice firearm familiarization on the range—how to safely draw a gun, quickly obtain a sight picture and put rounds on target. The remainder of the day is spent in self-defense situations that may be encountered on the street.”

Maltbie said that women made up 80 percent of a basic defensive-shooting course he recently taught. During such classes, he said he always tries to determine the motivation of a person attending an advanced class, which led to the following anecdote.

“A woman told me that while she was out walking her dog, a stranger approached and demanded her cell phone and other valuables,” Maltbie said. “Instead of complying, she drew her husband’s old .38 Special revolver and the perpetrator fled. The lady then realized that had he not run away, she was not sure if she could use the handgun or even how to use it properly. And that made her feel even more afraid of having the gun than not. She was worried that just by producing it she could have been killed, so decided to seek training and signed up for a course.” 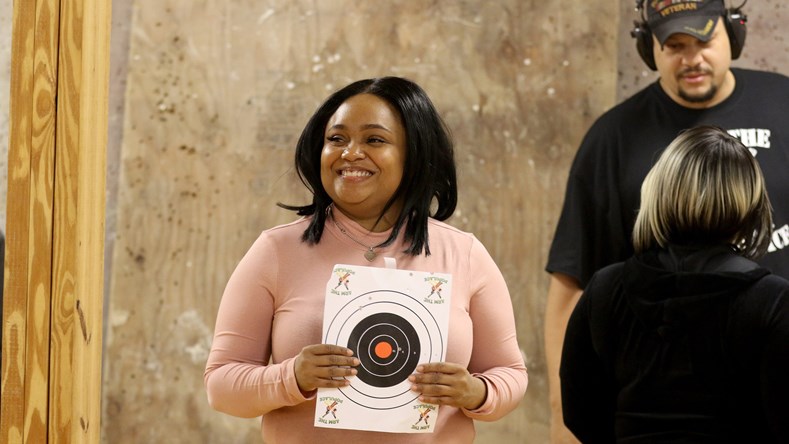 India Chappell is excited to see how well she did on her first time using a firearm during an all-female concealed carry and weapons class at New Prospect Baptist Church, 2/8/2020 © Cara Owsley – USA TODAY NETWORK

Maltbie went on to add that during classes he discusses with students what happens neurologically when a person is involved in a potential shooting situation. “It’s important to know how an adrenalin overload affects the body and how developing muscle memory in your gun-handling and shooting skills can help overcome or mediate some of those effects,” he said. “But that takes practice ... continual practice on the range following an initial CCW training course.”

“An armed society is a polite society,” concluded Doug Cooper. “Obtaining a CCW permit should be just the beginning of your handgun training, not the end of it. Our advanced classes emphasize knowledge, skills and the proper attitude in carrying a concealed firearm. All three elements are necessary to be prepared should a shooting situation ever arise. It’s just like learning to drive a car; training and practice are the keys.”

The ladies at New Prospect Baptist Church must have been listening, as within 24 hours of the CCW course six of the women had already signed up for advanced-level handgun training classes with ATP.

END_OF_DOCUMENT_TOKEN_TO_BE_REPLACED

What to Buy for the Female Hunter in Your Life

Shopping for a gift for a wife, mom, sister or friend who loves to hunt or shoot? You can’t go wrong with these ideas.

Big mistake: A man posing as a prospective homebuyer threatened a realtor with a knife and bear spray.

END_OF_DOCUMENT_TOKEN_TO_BE_REPLACED

News, thank the women of the NRA, Refuse To Be A Victim
END_OF_DOCUMENT_TOKEN_TO_BE_REPLACED