Be Ready: The Self-Defense Mindset

Be Ready: The Self-Defense Mindset

Get mad? Maybe. But being prepared is even more important.

I recently attended a defensive handgun class at Gunsite Academy during which I was told that if I were ever in a situation where I must defend myself, I should turn my fear into anger. As the only actual psychologist in the class, I was asked to describe the difference between fear and anger—emotions that elicit the same physiological reaction in the human body. The difference, I explained, lies in one's expectations about the situation, as well as one's intentions. I am not sure that it takes anger to survive and put up a defense against an attack. But, it does take a belief that you are going to defend yourself to the death if need be, and a belief that you are capable of doing so. If getting angry helps you to do this, then go for it.

A portion of the defensive handgun class was dedicated to discussing mindset, likely the most important element of self-defense. Gunsite founder Jeff Cooper, considered the "Father of the Modern Pistol Technique," defined mindset as: “Proper mental conditioning allows competence, rather than only chance, to increase the probability of survival. Pre-planning or logical pre-thought of crisis behavior actions, coupled with environmental awareness, has shown to be a great tactical advantage to winners of lethal confrontations.” The concept of mindset seems to be built on simple and inescapable logic. It is so logical, basic and vital, in fact, that the next step in this logic would conclude that a defensive mindset should be maintained at all times. In practice, we should be mindful of threats in our environment during every waking moment. However, I have observed very few people who actually remain this vigilant.

Cooper described mindset as a state of preparedness and awareness that will help us identify threats and respond to them. However, before this mindset can be adopted, we must believe that it is necessary, helpful and healthy. Many people believe living constantly on edge, unsheltered from dark thoughts, is no way to go about their day. Soldiers, police, first responders, healthcare providers, and others do not have the option to live sheltered lives, as their jobs require them to face tragedy. Many who do not have to face the darker aspects of life every day live in a state of naivete. We don’t need to be afraid of the dark, but we need to know how to get through it when it comes. It is our responsibility to defend ourselves against dark with a toolbox full of flashlights. It is irresponsible and possibly hypocritical to depend solely on others. I think "The Outlaw Josey Wales" said it best: “Now remember, when things look bad and it looks like you're not gonna make it, then you gotta get mean. I mean plumb, mad-dog mean. 'Cause if you lose your head and you give up then you neither live nor win.”

It now begs the question: If our survival is so important to us both personally and as a community, why are we not more mindful of threats in our environment and more prepared to address them? In fact, when discussing tragic news stories of shootings, terrorism and violent crimes, I often hear, “I don’t know what I would do if that happened to me.” The next logical step in this discussion should be an exploration of options and survival techniques. However, fear and grief often guide the conversation away from preparedness and into denial and avoidance.

Humans do a lot of their learning vicariously. In other words, in learning how to do things, we often observe how others do those things. But, when we see others fight for survival or help others, the tendency is to ascribe it to heroics, as if we instinctively know how to be heroes. Perhaps this is an optimism bias.

Many people believe that when the time comes, survival instincts will kick in and we will inherently know what to do to survive. There is no way that we can prepare for every danger or alternative, so why try? At the most basic level, it may be our way to avoid pain and seek pleasure. Survival is difficult, and fear is painful, so instead of prepare, many people choose to live a life of blissful ignorance. When people defend themselves or others in a scary situation, they are making a decision to help based on the skills and tools at their disposal.

The Rewards of Self-Defense
What are the rewards and benefits of learning a new discipline of self-defense? For one, if we accept that we must rely on ourselves for protection, we are actually better at doing so. Other studies have shown that learning defensive skills increases self-esteem, self-confidence and self-compassion.

Have you ever wondered if your life is worth defending? Many people think of defending others first with very little consideration for themselves. I was one of those people. I knew for a fact that I would defend my loved ones to the death if need be. I could imagine myself yelling, punching, scratching, kicking and shooting to protect those I love. I never really imagined fighting that hard for myself. I just assumed that I would defend myself, but my assumption was not enough. It is important to make the conscious decision that you would fight to the death to protect yourself from harm. 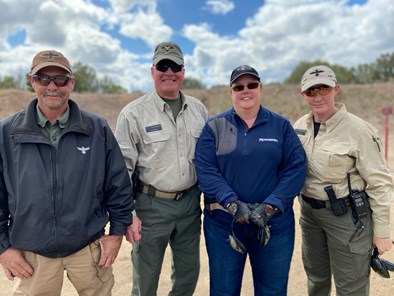 After deciding that I was willing to do whatever it takes to survive, my self-esteem and self-compassion improved. I started sticking up for myself more, becoming more outspoken, and questioning others, especially when I wasn’t sure of their intentions. I also started learning defensive skills that improved my self-confidence. Self-defense is not just a set of skills you may or may not need; it is a philosophy for confident and prepared people.

Overcoming Powerlessness
Studies have also shown that living in what are considered unsafe neighborhoods increases psychological distress, leading to social isolation and feelings of mistrust and powerlessness. Being unable to trust neighbors or socialize and come together for the common good (ie: neighborhood watch programs, neighborhood gardens, etc.) results in social isolation. If the resident also lacks defensive skills and the self-confidence to defend themselves, they feel powerlessness. Once the study participants learned defensive techniques and disciplined themselves to master those skills, their self-efficacy improved and feelings of powerlessness decreased. This self-confidence can inspire others, and in turn lessen our social isolation. An inspired people is a productive people. The less isolated we are through fear and mistrust, the more we can work together.

I was born and raised in West Virginia. My family might have been referred to as hillbillies, but I inherited some important traits from them, such as resourcefulness and determination. I am proud to have their heritage in my blood. Coming from such an independent, hardworking people is a true advantage. It is important to pass on the values of self-reliance and resiliency to those around us. If everyone transformed feelings of helplessness, isolation and mistrust into defensive skills and confidence, there would be no need to shrink away from frightening or bleak situations. Instead, we would all be able to overcome them. Self-defense is not only a God-given right, but also a healthy coping mechanism that can lessen psychological distress and mistrust in our communities. My goal is to encourage more people to be confident, effective, and powerful in a world where there are no more victims, only survivors.

About the Author: Samantha Mann, MA, is a W.V. Licensed Psychologist, Licensed Professional Counselor WV, and Nationally Certified Counselor. Raised in West Virginia, Samantha was the youngest of six grandchildren (and the only female) who were raised to love the outdoors and hunting. She has hunted from Texas to Africa, and believes that while Superman gets his power from the sun, her power comes from the outdoors. Samantha lives in southern West Virginia with her supportive husband, who doesn’t mind showing off her trophies to his buddies. She balances her time in the office helping others with time in the outdoors, focusing much of her career on helping children and adults who have been abused, neglected and mistreated.

END_OF_DOCUMENT_TOKEN_TO_BE_REPLACED

News, thank the women of the NRA, Refuse To Be A Victim
END_OF_DOCUMENT_TOKEN_TO_BE_REPLACED