Planning to carry a firearm on your next excursion into America the beautiful? Know the laws before you pack.

Of all the things America offers, the great outdoors and our ability to access miles of beautiful landscapes is high on the list.

On August 4, 2020, President Donald Trump signed into effect the Great American Outdoors Act, further prioritizing maintenance of America’s natural wonders and lands. The White House reported that $1.9 billion will fund projects every year for five years, benefitting the National Park Service, the U.S. Forest Service, the U.S. Fish and Wildlife Service, the Bureau of Land Management and the Bureau of Indian Education.

That same day, U.S. Secretary of the Interior David L. Bernhardt proclaimed August 4 “Great American Outdoors Day,” a day that will be an annual fee-free day for entrance into National Parks. Other fee-free days can be found here.

The timing is perfect, as national parks are reopening after some closures during the COVID-19 crisis. With plenty of summer weather left to go, people are heading outdoors to our national parks ... among them, of course, NRA Women.

Among those who may want to join in on the outdoor fun are many firearm enthusiasts. Perhaps you’re taking a trip west to do some camping in grizzly country, or maybe you’re going to a nearby state park or forest you’ve never visited before to do some hiking. Where exactly are you allowed to carry a loaded firearm when outdoors, even if you haven’t gotten around to getting your permit quite yet? 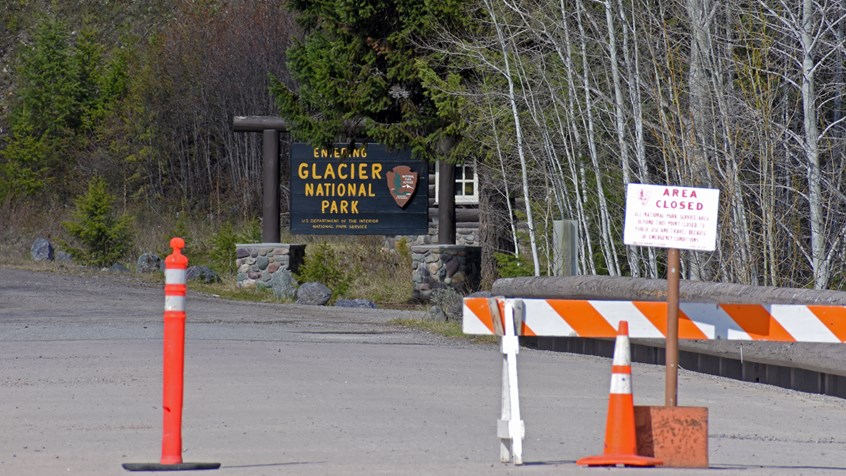 The key to knowing the legalities of carrying a firearm outdoors is knowing specific terminology of where and how you’d like to carry, and in which state you’ll be carrying.

Here are a few key definitions to keep straight:

Concealed Carry: This term refers to concealing a firearm beneath clothing, unable to be seen by the casual observer. Depending on which state you live, carrying concealed might require training and a permit. This grants you the ability to concealed carry anywhere listed on your permit, save a few location exemptions such as government or school property, banks or taverns, if alcohol will be consumed. You should also always check your state’s reciprocity laws with a state in which you plan to visit or travel in order to remain in compliance, as those laws are subject to change. A good resource to have on hand is the Traveler's Guide to Firearm Laws of the Fifty States. A new version with changes to state laws is introduced annually.

Constitutional Carry: This type of carry is unrestricted, permitting law-abiding citizens to carry a handgun either concealed or out in the open without the need for a permit. Currently, this type of carry is legal for Alaska, Arizona, Arkansas, Idaho, Kansas, Kentucky, Maine, Mississippi, Missouri, New Hampshire, North Dakota residents (for concealed carry only), Oklahoma, South Dakota, Vermont, West Virginia and Wyoming residents. However, state gun laws are subject to change, so be sure to keep abreast of the most up-to-date practices in the state in which you reside or plan to travel with your firearm.

Open Carry: This permits a gun owner to carry his or her firearm on their person in plain sight, without any or most obstruction from clothing. Several states are very permissive in their open carry laws, while others attach certain restrictions. You should always check your state laws—which change year to year—to ensure you are in compliance. 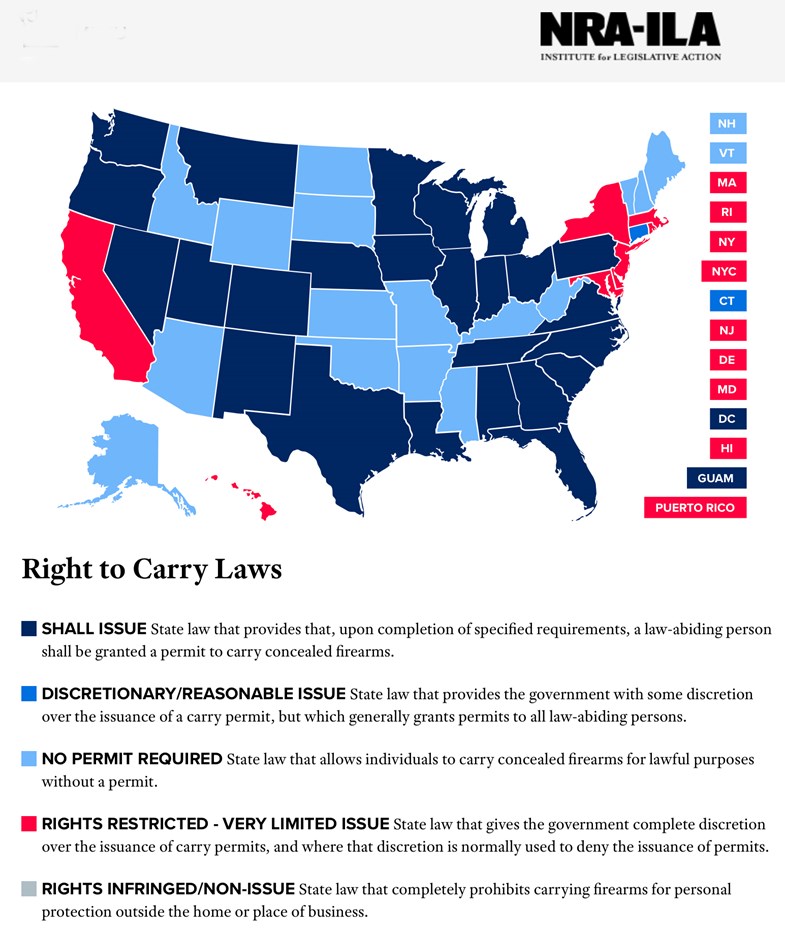 So, where can you carry?

Typically you can rely on state and local laws to dictate how and where you’re allowed to carry outdoors. For national parks, a February 2010 law allows for the possession and carry of firearms in compliance with state laws. In general, this means visitors can openly carry legal handguns, rifles, shotguns and other firearms and, as outlined by state statute, may also carry concealed. NRA-ILA has provided a list of direct links to Firearms Regulations in National Parks.

For those who choose to carry concealed, some CCW permits are recognized in multiple states, but many are not, so it is incumbent on you to know which state you are in, including those states that have national parks that span across more than one state. And although state reciprocity is recognized by the park system, it is still unlawful to discharge a firearm at a national park unless authorized to do so. Target practice is prohibited, and the National Park Service does not encourage firearm use for wildlife protection.

If you are wondering about the differences in who manages national parks, and state parks and forests, this should help:

National Parks: National Parks are managed by the National Park Service under the U.S. Department of Interior and focus on preserving land that is used for educational purposes or for tourist enjoyment. There are 419 national park sites in America, with a few of the most famous parks being Yellowstone, Yosemite, Great Smoky Mountains and Grand Canyon National Park. Sites typically require tickets for entry to camp, hike or drive through. Hunting is not allowed except in specific designated locations. 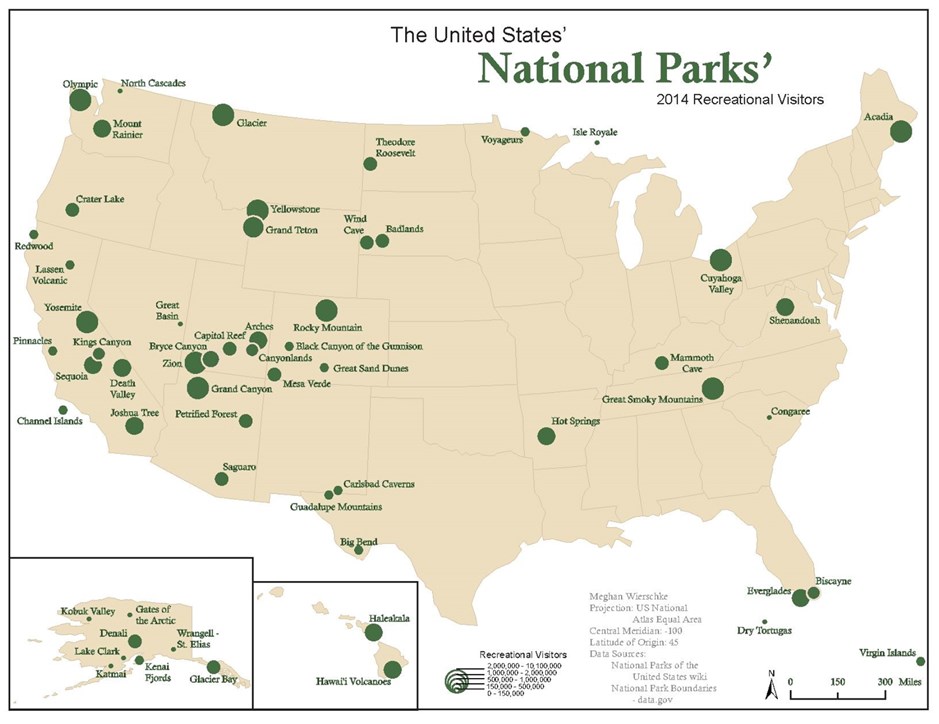 National Forests: National forests, all 155 of them, are managed by the U.S. Forest Service, which is an agency of the Department of Agriculture. Investments are allotted to resources available in the area such as timber, recreation, wildlife and fish for productivity or recreational use. Entry may require a user fee, not including a campsite reservation fee. Hunting is permitted.

State Parks: Similar to national parks, this land is owned by a state for showing off natural landscapes or preserving history. There are more than 10,000 state parks across the United States.

State Forests: The land in a state forest is used comparatively to a national forest, where resources such as timber are maintained, and hunting is allowed. About 83 million acres are managed by states.

Carrying in the outdoors is your right—just make sure you know the details of your plans before heading out there.

END_OF_DOCUMENT_TOKEN_TO_BE_REPLACED

News, thank the women of the NRA, Refuse To Be A Victim
END_OF_DOCUMENT_TOKEN_TO_BE_REPLACED