Clean Up Your Act with Federal Premium's Syntech Ammunition

Clean Up Your Act with Federal Premium's Syntech Ammunition

Over the last decade or so we've seen the 9 mm rise in prominence to become the top dog of personal protection-pistol caliber options. A contributing factor to its growing popularity has been the millions of dollars invested by ammunition manufacturers to develop more effective defense-grade ammunition. Improvements in bullet design have stepped up the 9 mm's performance enough to supplant the .40 S&W with several law enforcement and government agencies.

But in the meantime, we haven't seen all that much in the way of innovative upgrades to practice-grade ammunition. This seems a bit odd considering the fact that most handgun enthusiasts will fire dozens, even hundreds, of practice-grade loads for each defense-grade round they send down range. 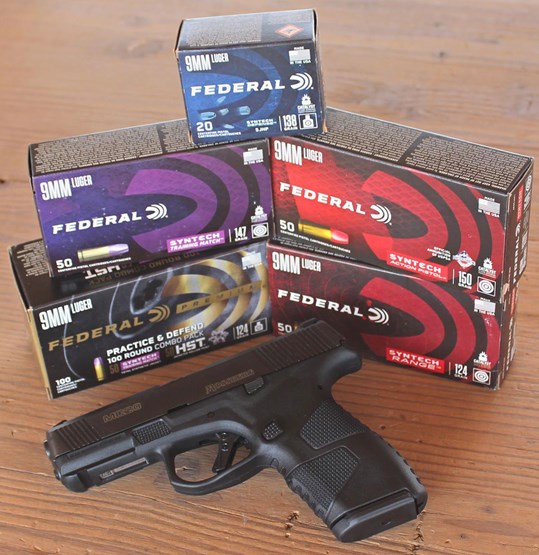 In 2018 Federal Premium Ammunition gave practice-grade pistol rounds a much needed makeover with the launch of the Syntech pistol ammunition line up. Although the use of synthetic bullet coatings is not a wholly new idea, Federal's approach is effective and affordable. Syntech ammunition incorporates other key changes that make it cleaner to work with, safer to use indoors and with hard target (steel plates) while maintaining the on-target accuracy folks are looking for.

Typical practice-grade ammunition tends to be loaded with either cast or swaged lead bullets, or copper wrapped full-metal jacket bullets. Lead bullets are among the least expensive to buy because they are simple to make and, when properly loaded, they can be accurate. However, they tend to produce a good deal of smoke and foul the bore of the pistol quickly with lead deposits and waxy lubricants that have to be scrubbed out. 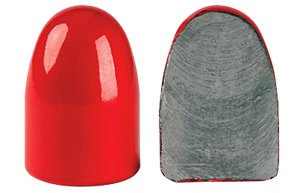 Full-metal-jacket (FMJ) bullets usually have a lead core with a thin sheet of copper (sometimes brass) wrapped over the nose of the bullet and along the sides leaving the lead base exposed. These bullets are not nearly as smoky and the amount of lead fouling they produce is significantly reduced. But the copper jackets rub off on the bore of the barrel and have to be scrubbed out as well. The copper jackets also generate more friction than un-jacketed lead bullets which in turn causes the rifling to wear down more quickly.

Solid core bullets, jacketed or un-jacketed, are also susceptible to ricochets under some shooting conditions. When the solid lumps of lead strike hard barriers, including rocks, steel plates and tough building materials, the bullets can bounce off with enough energy to keep traveling at high speed in unpredictable directions. 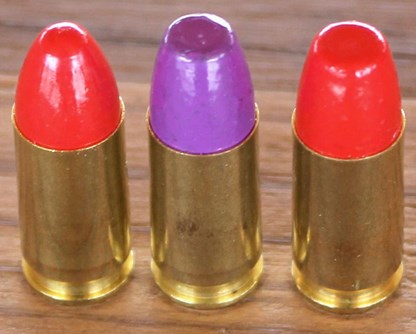 Federal's Syntech bullets consist of pre-fragmented lead cores with a total synthetic jacket (TSJ) that completely encapsulates the bullet. The synthetic jacket eliminates lead and copper fouling in the bore of the barrel. It can also be produced in different colors, including red, purple and blue, for easy identification. The pre-fragmented core is essentially compressed lead dust. When the bullet strikes a hard target, it breaks apart so that there are no large pieces to ricochet off of the target. 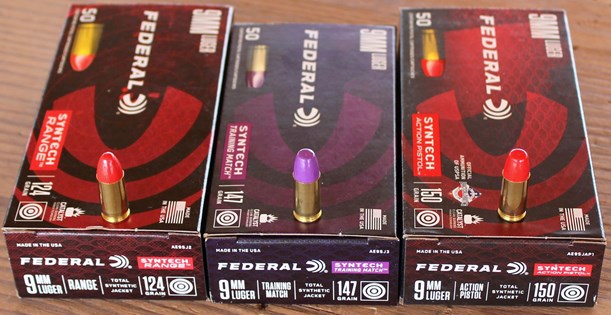 Federal incorporated two additional upgrades to reduce cleaning times even more. Syntech cartridges use lead-free primers and they're filled with a special clean-burning gun powder. The recently developed primer incorporates Federal's Catalyst technology for a hot ignition that burns the powder more efficiently, in turn reducing the amount of carbon fouling. No lead, no copper and reduced carbon build-up means a much cleaner barrel with less wear and tear. 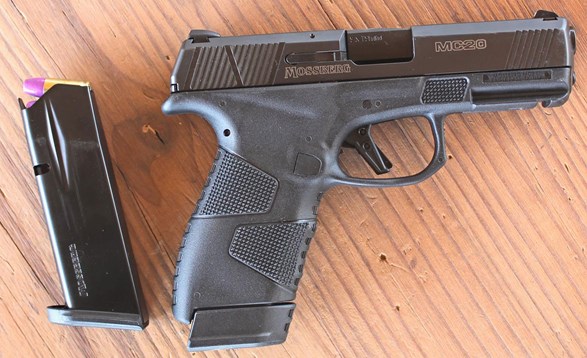 These technological upgrades to practice-grade ammunition are nifty and all but whether these changes are really useful or not comes down to reliability and accuracy.  To evaluate Syntech's performance, I fired three different 9 mm loads at 15 yards using the recently released Mossberg MC2c concealed-carry pistol. 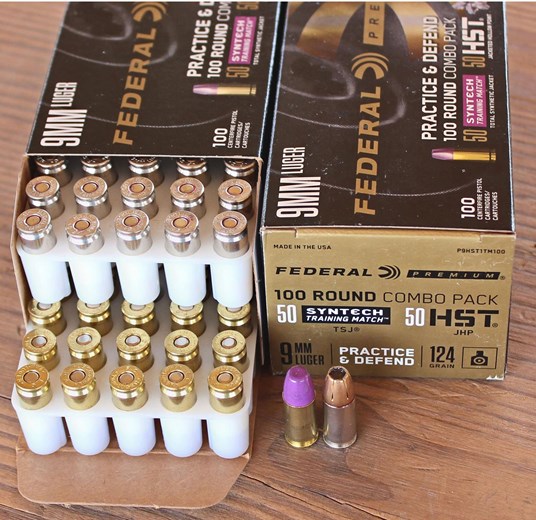 The Syntech Range line of all-purpose practice grade ammunition features bright red round nose bullets in 115-gr. and 124-gr. weights loaded to velocities that are similar to popular defensive loads. The Action Pistol load with red flat-nose bullets is designed specifically for competition. It launches a long, heavy 150-gr. bullet at a slower velocity to reduce noise and felt recoil. The purple flat-nose Training Match loads are for competition and defensive training. Available in either 124-gr. or 147-gr. bullet weights, they can be purchased in 50-round boxes or in 100-round packs that include 50-rounds of ballistically matched Federal HST jacketed hollow points for self defense.

Five 5-shot groups were fired for accuracy testing and 10-shot strings for velocity. All of the various bullet weights and velocities operated flawlessly in the MC2. There were no jams or hang-ups in the course of firing over 200 rounds.

Here are the results:

I've been lucky enough to work with Federal's Syntech ammunition since it was first released. It has operated reliably for me in a variety of handguns and rifles. When the customer demand for ammunition is at a more typical level (not the ultra high demand it is right now) Syntech loads cost a bit more than traditional FMJ loads. But the trade-off in time and elbow grease used up scrubbing fouling out of the barrel, especially for competitors or those who are taking weekend classes, more than makes up the difference. 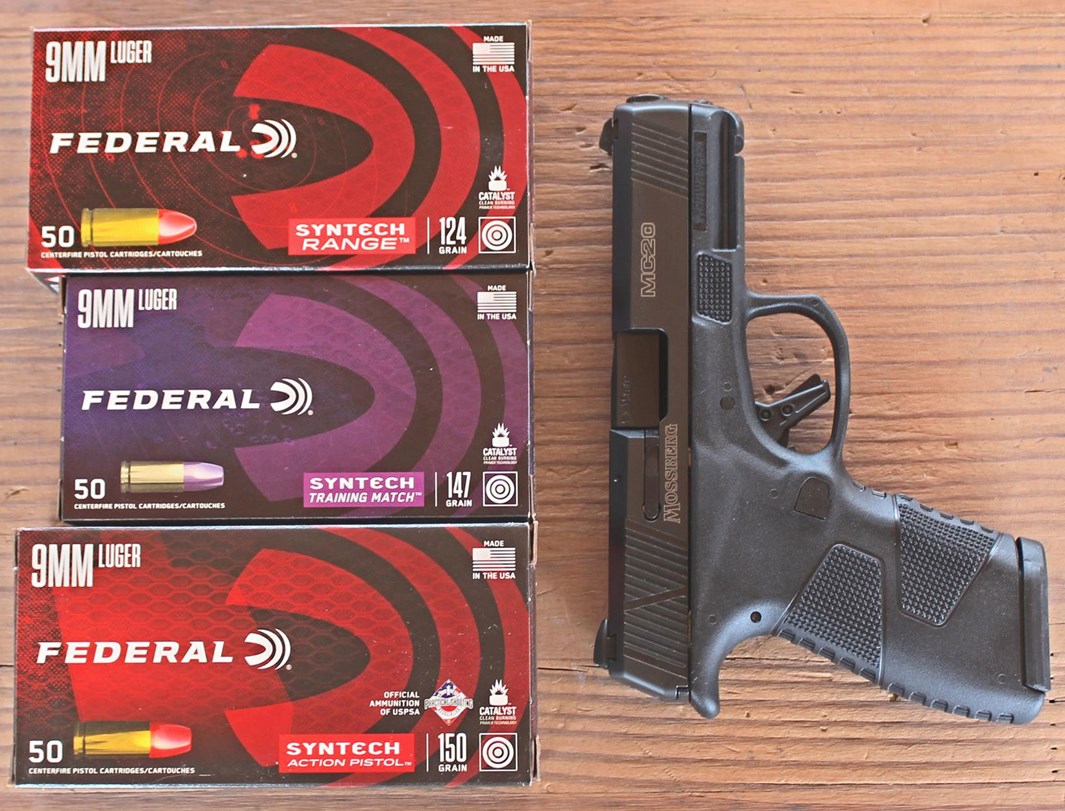 END_OF_DOCUMENT_TOKEN_TO_BE_REPLACED

Why You Should Do Dry-Fire Drills

What’s dry fire? Why, only the cheapest and easiest way to train …

It's a natural match to win some National Matches!

Kim Rhode has been named the most successful shotgun shooter of all time by the International Shooting Sport Federation. She competes in skeet and double trap and she's the first individual athlete to medal in five straight Olympics, where she's won three golds, one silver and a bronze.

END_OF_DOCUMENT_TOKEN_TO_BE_REPLACED

News, thank the women of the NRA, Refuse To Be A Victim
END_OF_DOCUMENT_TOKEN_TO_BE_REPLACED