You don't have to spend a fortune to enjoy this diverse series of .22 caliber single-action wheelguns.

I enjoy the shooting sports lifestyle because there are so many different endeavors to pursue. You have 3-gun competitions, Old West reenactments, long-range target shooting and sporting clays, to name just a few. But this conversation is about one of the most popular, relaxing and often under discussed hobbies that many Americans enjoy. I'm talking about casual rimfire plinkery, or, the fine art of perforating soup cans and punching paper with .22 LR handguns.

Many of today's rimfire plinkers are taking advantage of the diverse selection of affordably priced semi-automatic pistols the market has to offer. But Heritage Manufacturing, Inc. has been quietly driving a single-action revolver revival with its budget-friendly series of American-Made Rough Rider rimfire wheelguns. In fact, these .22s have sold so well that Heritage is one of the top revolver makers in the country. 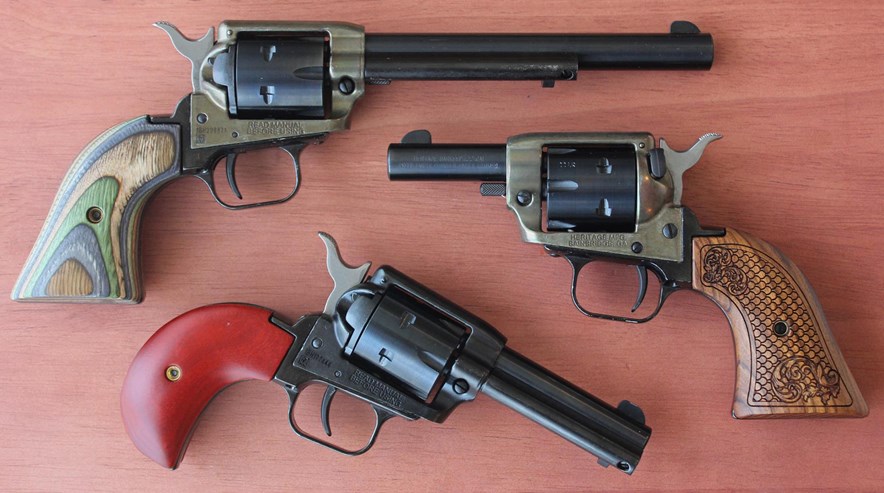 The Rough Rider rimfire revolver is available in a variety of barrel lengths and grip shapes.

But why would someone want to shoot .22 LR through an old-fashioned cowboy revolver instead of a sleek, modern semi-automatic? First off, there's the Rough Rider's sticker price. While you can pick up good quality .22 pistols for around $300, the Rough Rider's suggested retail prices range from around $130 to $225. This makes them some of the most affordably priced handguns available. But there's more to this rimfire's popularity than just the cost.

The Rough Rider's design is inspired by the famous Colt Single Action Army. There's something about the way the grips fits your hands and how they balance that makes them point naturally, like an extension of the shooting arm. They offer a short and light trigger pull that's easily as good as, and sometimes better than, that of a semi-automatic pistol. I used a Lyman digital trigger gauge to check the three revolvers shown here and they ranged between 2 lbs. 8 oz. to 3 lbs., which is nice and light for a production revolver.

This 6.5" barrel version has a simulated case color frame and a 3-color camo laminated grip.

This type of gun doesn’t suffer from the ammunition sensitivity that can plague some rimfire semi-automatics. Because the revolver does not rely on the ammunition to cycle the action, you can go ahead and use any bullet weight or velocity you prefer (or that you can find). There's also no magazine to be dropped, lost or broken. These revolvers have a simple, rugged design that stays fully assembled when loading and unloading.

But the Heritage Rough Riders do have their trade-offs. The guns I've worked with were all assembled properly, they've operated reliably, and the grip panels have all been nicely finished and properly fitted to the grip frames. But if I can be allowed to nitpick, they did arrive with some minor finish issues. The bluing of the carbon steel barrel may have a little rub here while the coating on the aluminum ejector housing, frame or grip frame may show a bit of chipping there. The black gloss coating on the aluminum components does not quite match the matte blue of the steel components. And there is a little play in the cylinders when loading. 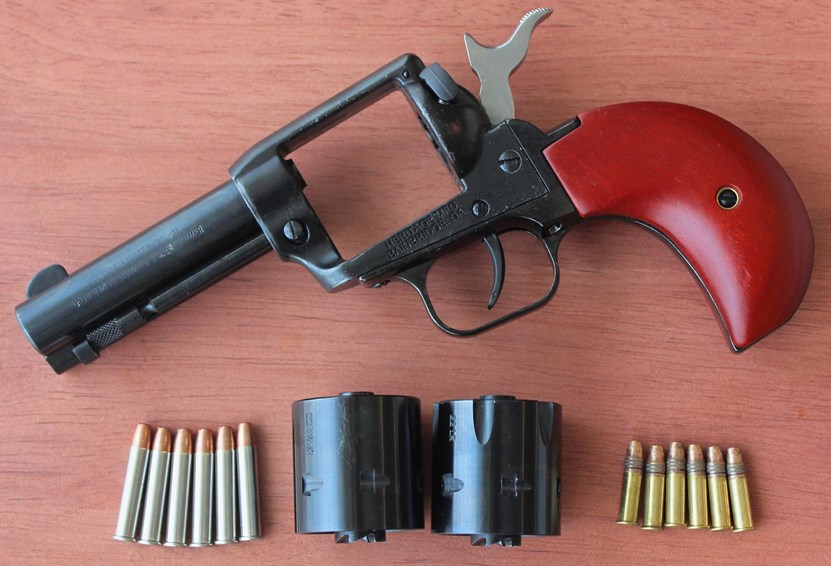 The historically-influenced vintage sights are rudimentary and can't be adjusted, just like the vintage models. But I've found this type of sight system is up to the task of hitting targets at the distances these revolvers are intended for. The ammunition capacity is restricted to 6 rounds with the models shown here (the company does offer 9-shot configurations). Lastly, a single-action revolver is a slower gun to load and fire than a semi-automatic.

With these considerations in mind, you have to ask yourself this question: Is the goal of this gun purchase to plink, or to shoot as fast as I can? If you want to burn through your ammunition as quickly as possible, then the Rough Rider isn't for you. Then again, .22 LR ammunition isn't as cheap as it used to be. If you're willing to slow down a bit and take deliberate shots with a nice light trigger, then these Heritage revolvers will do nicely. 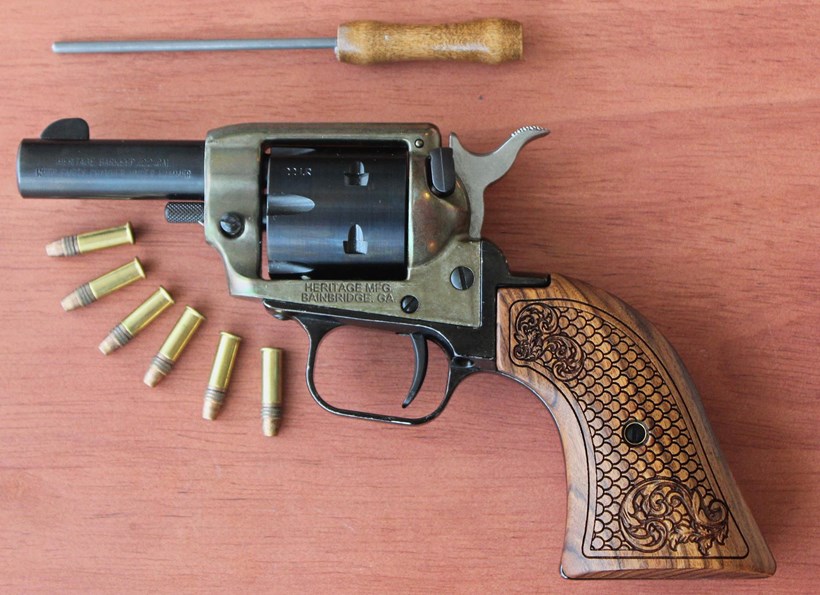 The Barkeep is a 2.68" barrel model inspired by the vintage Colt Shopkeeper.

For those who are unfamiliar with this type of handgun, the Rough Riders are called single-action revolvers because the hammer has to be manually cocked for each shot fired. The hammer actually has a total of four positions. The first one is fully forward, which means it is resting against the firing pin. This is where the hammer rests after firing a shot.

Pulling the hammer back gently until you feel the first click will lock up the trigger and cylinder so that the gun won't fire. This is the original “safety” for this type of revolver. However, Heritage does not recommend using this hammer position as a safety on its own.

On the left side of the frame, opposite of the loading gate, the company has added a modern thumb safety, which is easy to maneuver with the thumb of the shooting hand. Flip it up in the Safe position to block the firing pin. Flipping it down into the Fire position exposes a red dot on the frame. In addition to placing the hammer in the safe position and engaging the manual safety, Heritage recommends carrying Rough Riders with the hammer over an empty chamber. 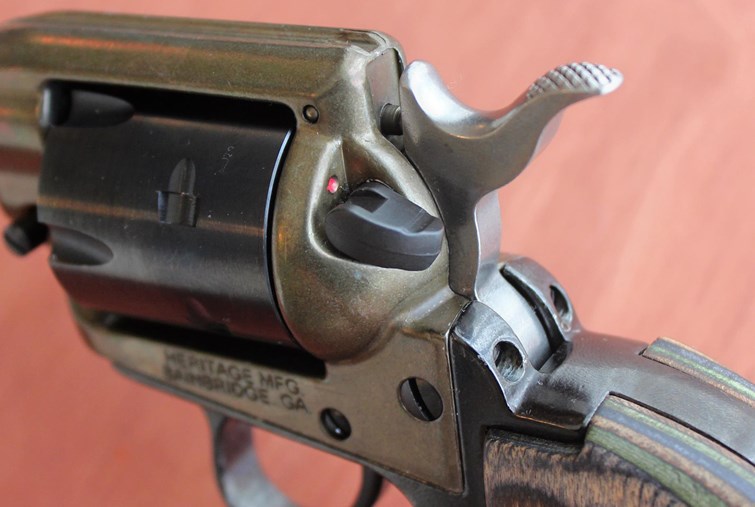 Heritage has added a thumb operated manual safety to the left side of the frame opposite of the loading gate.

Pulling the hammer back a bit further will produce a second click to indicate that you've reached the “half-cock” position. The trigger stays locked up but now the cylinder can be manually rotated for loading or unloading through the right-side loading gate. Pulling the hammer back all the way until you hear a third click means the revolver is now fully cocked and ready to fire. Pulling the trigger will cause the hammer to fall forward, strike the firing pin and fire the gun. Now the cocking process can start over again.

Once all the cartridges are fired, the spent cases need to be manually unloaded. With the hammer in the half-cock position, open the right side loading gate. Rotate the cylinder so one of the cylinder's chambers lines up with spring loaded ejector rod mounted to the right side of the barrel. The ejector has a small, curved handle at the top. Press the ejector rod back through the chamber to knock out the spent case. Release the ejector, rotate the cylinder and repeat until all six chambers are clear. Rotate the cylinder again, loading each chamber with a fresh cartridge. Close the gate, point the revolver down range at your intended target, fully cock the hammer and then go to work! 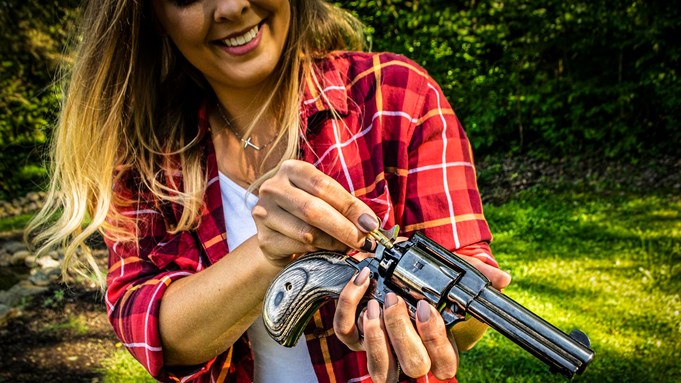 This single-action revolver is loaded through a swing-out loading gate one cartridge at a time.

The Heritage Rough Riders are available is several configurations. The standard grip models are available with 4.75", 6.5" or the extra long Buntline style 16" barrel. Those outfitted with the curved birdshead grips are made with 4.75" and 3.5" barrels. Recently the company added the Shopkeeper, a standard grip model with a 2.68" barrel that's too short for an ejector, so a hand held ejector is provided in its place.

Heritage offers a variety of custom upgrades and accessories as well. Polymer and laminated hardwood grip panel sets are available in a variety colors starting at $25.99. You can pick up an unfluted .22 Mag. caliber-conversion cylinder that will fit your .22 LR for just $29.99 or an engraved .22 LR cylinder for the same price. The company stocks leather belts, holsters and ammo pouches so you can really get your cowboy outfit on without breaking the bank. For more information, visit heritagemfg.com. 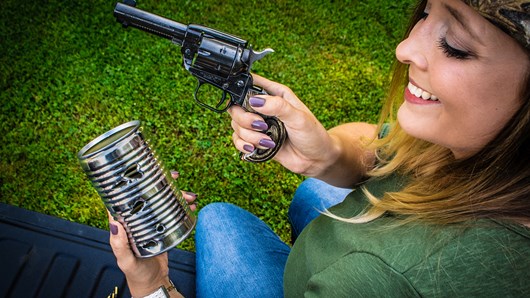 American Rifleman | The Burning Question: Are Your Guns Safe in a Fire?

American Rifleman | Self-Defense Revolvers: Are They A Good Choice?

END_OF_DOCUMENT_TOKEN_TO_BE_REPLACED

News, thank the women of the NRA, Refuse To Be A Victim
END_OF_DOCUMENT_TOKEN_TO_BE_REPLACED