We all follow various daily routines that we use to save time and simplify our schedules. As adults, tasks like washing our hands are so well ingrained that we do them automatically without even thinking about them. But routines are not instinctual. We have to learn the individual steps and practice them until they become a part of what we do. Good routines can be especially important when using firearms. 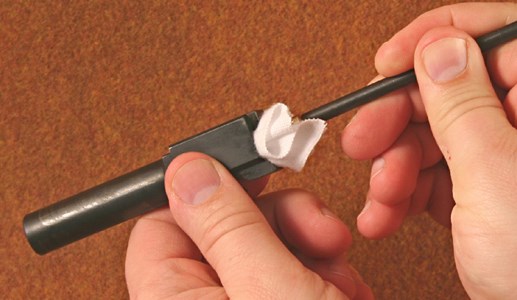 One of the routines that new gun owners will become familiar with includes the steps taken to prepare a recently purchased gun to be fired for the first time. Many of the products we purchase arrive ready to use right out of the box. But what I've learned firsthand in more than 25 years of working with new and used firearms is this: Guns do not arrive ready to shoot.

Brand new guns can ship from the factory with little or no gun oil in them with tiny bits of grit and metal shavings in the joints that grind like sand paper against the moving parts. It's not uncommon for small parts, like adjustable sights and grip screws, to need tightening so that they don't shake loose and fall out. Used guns tend to be dirty and unlubricated on the inside even though they may have been polished up to look nice on the outside. They can also contain old lubricant that's turned into a tar like goo that gums up the action. This means that whether a gun is brand new or used, it will need a bath and check-up before it’s fired. 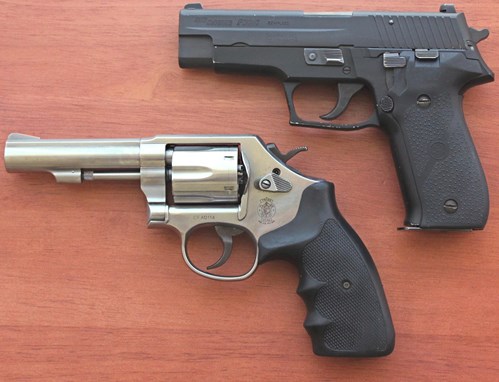 The following get-it-ready routine can be used with any firearm. But with modern handguns currently representing around 60-percent of all gun sales in the United States, I'm going to focus on semi-auto pistols and double-action revolvers like the surplus SIG Sauer P226  pistol and Smith & Wesson Model 64 revolver from AIM Surplus that are shown here. Remember that you don't need to be a certified gunsmith or a mechanical engineer to perform these steps. It may take a bit of practice, a few reminders and possibly some advice from a more experienced mentor to get the hang of it but this is true of any new routine we choose to master. 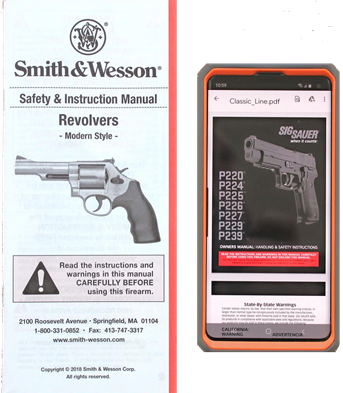 The type off ammunition the gun uses, which loads will provide optimum performance and loads that should be avoided.

Diagrams and descriptions of the gun's controls, safety features and the names of the various parts.

One thing that’s true of all firearm instruction manuals is that they are boring. I know because I've read so many of them! Despite their lack of entertainment value, it's important to take the time to read the manual from cover to cover. Some manuals are more instructive than others but these little booklets hold several important pieces of information you'll need in order to operate the handgun safely,

New guns usually arrive with a printed manual included in the box with the other accessories. Some used guns are sold with the original manuals but most are not. The majority of manufactures have online manual libraries with copies that can be read on a handheld device, downloaded or printed if you prefer a paper copy.

Clean, Lubricate and Protect Your Gun Metal
Shooting firearms is a bit messier than some folks might think. All guns are subjected to high levels of heat, pressure and friction when the propellant powder inside of the cartridges is ignited by the primer. The hot gases produced by burning gun powder are also dirty, much like car exhaust. Along with throwing smoke into the air, they also leave behind burnt black residues that can clog up the handgun's action if they are allowed to build up. As the bullets travel down the barrel, they leave behind traces of lead and copper that can build up inside the barrel and negatively affect accuracy. Finally, guns contain metal parts that are susceptible to corrosion (rust, pitting) that will weaken parts and cause them to break if the corrosion is not prevented. 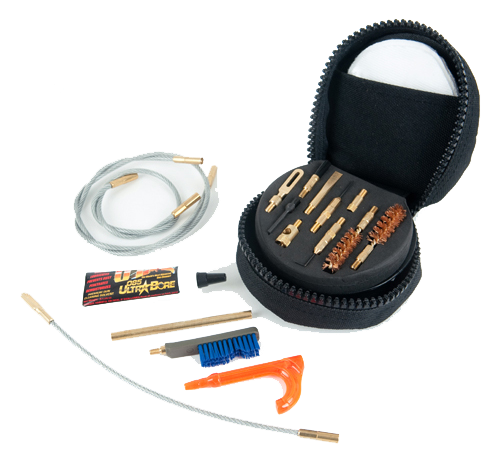 This is why there are three types of gun care products available for routine handgun maintenance: solvents, lubricants and protectants, applied in that order. Some products, called CLPs, contain all three. Gun solvents, also called gun cleaners or gun scrubbers, are liquids applied to rags and brushes to scrub out bullet fowling from the barrel and remove powder residues from the plastic and metal parts of the gun. Gun cleaners definitely get the dirt out but they also remove any previously applied lubricants and protectants.

Lubricants, such as gun grease or gun oil, are applied to moving parts and key locations within a gun to reduce friction and keep the parts moving smoothly. However, heat and the passage of time cause lubricants to break down or to dry up, so more will need to be applied if the firearm has been shot a good deal or if it has been in storage for a long time. Protectants, also known as rust protection or corrosion prevention products, keep metal from rusting by forming a protective barrier between the gun metal and the water in the air. Rust inhibitors are usually applied after a gun is reassembled. 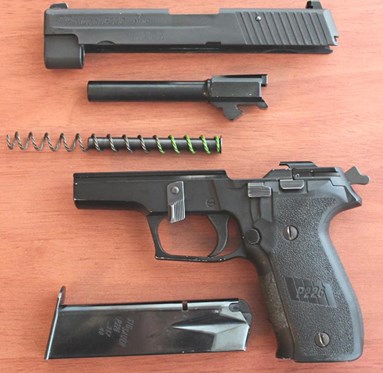 How to take a handgun apart for cleaning, and where to apply the lubrication, depends on which model you own. Different models follow different steps. The owner's manual will walk you through it but don't be shy about asking for some help from another shooting enthusiast, or the dealer who sold you the gun, if you have any questions about what to do.

While the gun is disassembled for cleaning, take a few minutes to inspect the parts for any cracks, chips or breaks. If something looks broken, then there's a good chance that the gun is not safe to fire until the damaged parts are replaced or repaired.

Give the Gun a Dry Run
Once your handgun has been reassembled, it's time to give it a dry run. Also known as a function check or a bench check, a dry run means testing all of the gun's functions while it's completely unloaded. It's not possible to write a comprehensive check list here because each model of handgun has its own set of controls and features. But the following checklists for the SIG Sauer P226 and Smith & Wesson 64 provide a good idea of what to look for. Remember that any gun maintenance routine starts with verifying that the gun is completely unloaded. 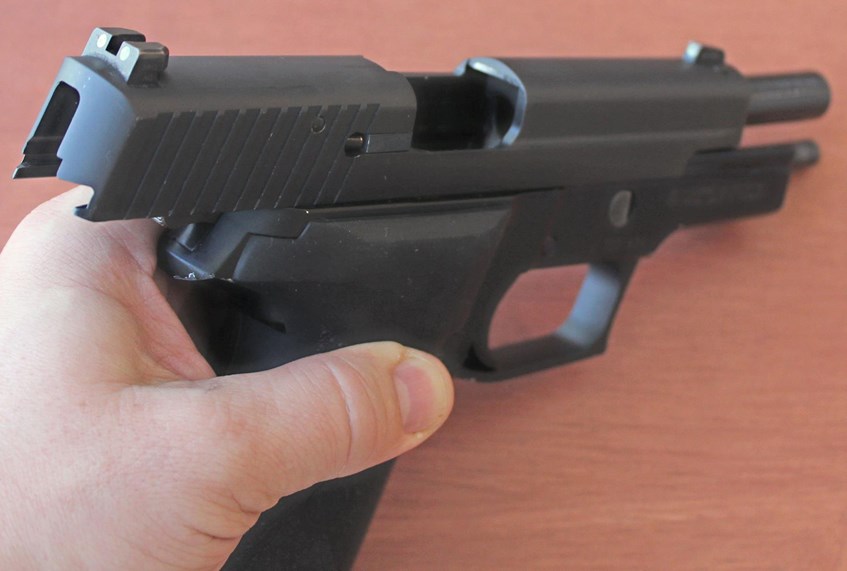 If your handgun passes the dry run without any mechanical problems, then it should be ready for the range. 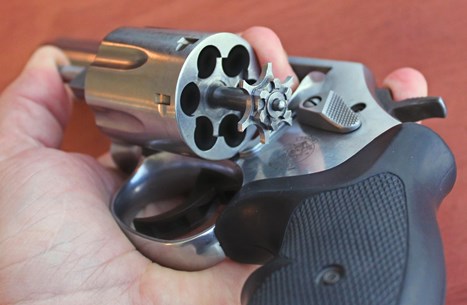 I understand that this is a good deal of information to absorb and it probably seems like an awful lot to do ahead of a first trip to the range. But trust me when I say that this routine will save you time, money and frustration in the long run. The gun will run much more reliably and you won’t have to crawl around on a dirty range floor looking for an adjustable sight screw the size of a pin head. But remember, if there is anything about the gun that seems out of order, or if you know it's not working properly, do not fire it. Instead, seek out the professional assistance of a certified gunsmith in order to get it repaired.

NRA Women | Dressing Up the Ruger PC 9 with Tandemkross

END_OF_DOCUMENT_TOKEN_TO_BE_REPLACED

News, thank the women of the NRA, Refuse To Be A Victim
END_OF_DOCUMENT_TOKEN_TO_BE_REPLACED