How far should you go with safeties? Learn about each type of handgun safety in order to make the choice that's right for your lifestyle.

A couple of years ago, I was standing inside a small local gunshop waiting my turn. I like to clean my own guns, but every now and then, I drop them off at a gunshop so the professionals can take them apart and clean them thoroughly. I watched as the owner was showing a young woman a Smith & Wesson M&P380 Shield EZ. She ended up buying the gun.

When I asked the owner if he sold a lot of that particular model, he said he can’t keep them in stock. Although the pistol is well known primarily for its easy-to-rack slide and easy-loading magazines, the owner pointed to the grip safety lever and said, “It’s because of this right here. New shooters like when there are several safeties on a gun, and they love this large grip safety lever that’s on the backstrap.” Mystery solved.

Today’s guns have many safety mechanisms, such as grip safeties, thumb safeties and even firing pin blocks. It’s important to note that you should never rely on a gun’s safety to totally, 100 percent of the time, protect against the gun discharging. Safeties are mechanical devices, and are subject to failure from wear and tear like any other device. The safety serves as a supplement to proper gun handling. Follow the NRA Rules of Gun Safety, and never assume the gun won’t fire just because the “safety is on.”

Choosing a Handgun Based On Safety Features
“Every gun owner needs to determine what makes the most sense for his or her lifestyle, home makeup, body/hand type and skill level,” said United States Concealed Carry Association instructor Beth Alcazar. “Considerations should include things like who might have access to the gun, where the gun will be stored, and how the gun will be carried, whether on or off body.” She added that finding a gun that “fits” is of utmost importance. “It might sound tempting to automatically choose a firearm with a manual safety, but without proper training and experience, a gun owner may end up with a ‘click’ instead of a ‘bang’ when life hangs in the balance,” she said.

Make a list of several handguns you are interested in, do some research on each of those guns, and rent them at the firing range. You should be able to work the safety quickly and easily, properly manipulate the magazine release, rack the slide and reach the trigger. Make your own evaluations and, ultimately, your own conclusions based on those categories.

Internal vs. External Safeties for Concealed-Carry Pistols
For an everyday concealed-carry pistol (EDC), some folks prefer not to carry a firearm that has an external safety, yet others insist on it. The reasons are varied—some say they don’t want to waste time flipping switches when seconds count. Others feel more comfortable knowing there are multiple safeties, both internal and external, in their EDC.

While Alcazar’s personal preference is for no external safety, citing that we all have two built-in safeties already—our trigger finger and our brain—she reminds us that “a well-trained trigger finger should be off the trigger and along the side of the gun until the brain gives it the message it to shoot.” She continued, “The brain must first consider intent and justification in order to determine whether or not to take a shot. ... As long as these two ‘safeties’ are working together, there should not be fear that you’ll mess up, cause an accident, or negligently discharge your gun.”

Alcazar says a modern, striker-fired pistol without any additional, external safeties is an excellent choice for a beginner, as they are easy to train with and easy to control. “There are no complex moves or ‘extra steps’ to learn, or to remember under stress, as you drive out to the target or as you come back to the holster,” she said, explaining that a more complicated firearm is more difficult to train with and less efficient to use. “Ultimately, if the primary purpose of the firearm is self-defense or the defense of others, you want to be able to use it during the worst-case scenario,” she said. “Even though guns with safeties are effective, choosing tools that are fundamentally more efficient make the most sense all around.”

Types of Handgun Safeties
So how far should you go with safeties? What kinds of safeties should you look for in a handgun? Do you want a handgun with only an internal safety, or would you prefer a firearm with both an internal and external safety? Listed below are the types of handgun safeties that are available so you can make an informed decision on which handgun is best for you. 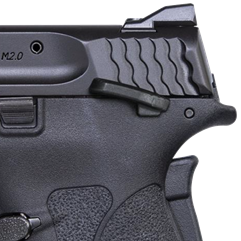 Manual Safety. This is the oldest and most common form of a handgun safety. This switch, or lever, when placed in the “safe” position, prevents a pull of the trigger from firing the firearm. For some guns, pushing the lever up puts the safety on, but for others, pushing the lever down puts it on. Be sure to read the owner’s manual to confirm. 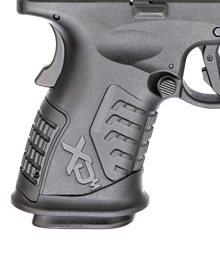 Grip Safety. Grip safeties prevent the gun from firing unless it is gripped in the proper firing position. Located on the back of the handgun’s grip, the safety must be depressed by the shooter’s hand so the gun can fire. I’ve shot handguns with this type of safety, on which one has to squeeze the grip very firmly in order to shoot the firearm. Certain models of Springfield's polymer pistols are known for their grip safeties, as are some 1911-style pistols.

Drop Safeties. These are passive safeties located inside a handgun that consist of mechanisms that prevent the firearm from discharging when dropped or roughly handled. They work by providing an obstruction between the firing mechanism and the cartridge and are attached to the trigger. Some states, such as California, require some form of “drop safety” on all new firearms.

Hammer Block. Similar to a firing pin block, a hammer block is a latch or other obstruction built in to the action that prevents the hammer from contacting the cartridge or firing pin when at rest. This allows the hammer to contact the primer or pin only when you press the trigger.

Transfer Bar. Used mainly in revolvers and certain rifles, a transfer bar prevents the hammer from hitting the cartridge or firing pin when it is in the up position with the hammer cocked.

Safety Notch. A safety notch is one of the oldest forms of drop safety, used on older single-action revolvers, some lever-action rifles and several older 1911s. The safety notch allows the sear to catch and hold the hammer a short distance from the pin or cartridge primer, in a half-cocked position. Note: Shooters unfamiliar with how to engage the “half-cocked” position must seek instruction in this method.

Trigger Safeties. Ahhh … welcome to the world of Glock, which employs a unique safety system that uses a small lever on the trigger itself. In handguns with this type of safety, the trigger is composed of two interdependent parts, and the shooter must move both parts of the trigger in order to fire the gun. This type of safety requires a heavier trigger pull. 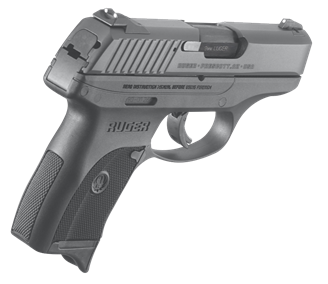 Magazine Disconnect. This type of internal mechanism prevents the pistol from being fired unless a magazine is completely inserted. One of my first students had a Ruger LC9 semi-automatic, and this mechanism worked beautifully. She had difficulty inserting the magazine all the way, and this feature taught her to load the mag properly. Those who choose a firearm with a magazine disconnect should consider the drawbacks in a handgun intended for defensive use. For example, if the magazine has not been completely seated in the gun, the pistol will not fire. The same will result if the magazine release has been inadvertently depressed while drawing the pistol.

Decocker. A decocker is a device that safely brings down the hammer on a chambered round without pulling the trigger. Remember: While this removes the requirement to pull the trigger, it’s still necessary to keep the gun pointed in a safe direction while decocking, since all mechanisms can fail.

END_OF_DOCUMENT_TOKEN_TO_BE_REPLACED

News, thank the women of the NRA, Refuse To Be A Victim
END_OF_DOCUMENT_TOKEN_TO_BE_REPLACED