"Just One" Guns for Beginner and Casual Shooters (Part 1)

"Just One" Guns for Beginner and Casual Shooters (Part 1)

If you are new to shooting, or just want to shoot once in a while, here's a rifle, handgun and shotgun to help get you started.

Members of the shooting community have different reasons for choosing to own firearms. Collectors, hunters, competitors and those who practice legal concealed carry can select from literally hundreds of different models of rifles, shotguns and handguns which have been specialized for a given task. Gun geeks (like myself) enjoy plumbing the depths and traversing the expanse of the shooting sports market place, relishing the diversity of it all.

However, plenty of folks out there perusing the Internet and exploring display cases are not interested in stocking a personal gun museum. Instead, they're looking to own just one gun for recreational or defensive purposes. After buying a single rifle, handgun or shotgun, some one-gun owners may decide to go ahead and own one of each. But that's it, no additional hardware is required. 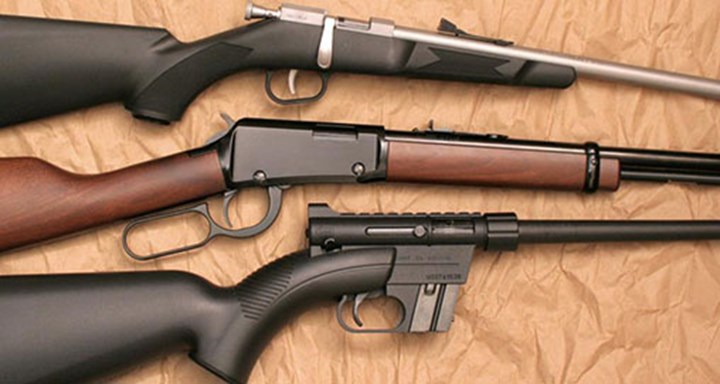 With so many makes, models and calibers to choose from, how does a just-one gun shopper (or someone who is new to the shooting sports for that matter) know where to start?

This is the first of three articles that cover a total of 9 "Just-One Gun" options that span most of the shooting endeavors that American enthusiasts enjoy. Each of these categories could stand alone on its own merits. But for the sake of this conversation, they've been organized into three groups: rifle, handgun and shotgun models for beginners and those who just want to shoot once in a while. Flexible sporting options and those for home-defense and 3-Gun will be covered in separate articles.

Rifle: .22 LR Carbines
If I was taking someone who has never pulled a trigger before to the shooting range, the very first firearm I'd pass them would be one of the smaller size .22 LR rimfire rifles (small rifles are also called carbines). Starting off with a light weight .22 is one of the best ways to begin mastering important shooting skills including stance, sight picture and trigger control.

The ammunition for these guns is one of the least expensive kinds of ammunition available. As of this writing, my local big-box store is selling bulk-box .22 for $0.05 per round. Budget priced practice grade 9 mm pistol ammunition (the least expensive centerfire cartridge in the case) is selling for $0.26 a round. The cost savings for ammunition, along with rifles that cost less than $300, means you can practice regularly without punching a hole in your budget. They are also quite handy for small game hunting and pest control.

The best thing about a good .22 carbine is that you'll never out grow it. Even though I enjoy a variety of more potent platforms, there's nothing else out there quite like the fun of an afternoon spent plinking away with a soft shooting rimfire rifle.

Semi-automatic .22s are among the most popular because of their removable, easy to load magazines and light triggers. The Ruger 10/22 is one of the most popular .22 rifles available. It's rugged, reliable with a variety of ammunition and easy to clean. This rifle has a modular design that allows components to be traded out or upgraded in just a few minutes using simple hand tools. Several companies offer all kinds of shoulder stock and upgrade components. Budget friendly blued steel models with hardwood stocks are available right alongside takedown and competition-grade configurations. In other words, if you buy a 10/22, you'll be in good company.

The Savage Arms A-22 semi-automatic is a great little gun that is now available in a takedown version called the Model 64. Winchester recently released the Wildcat (which is intended to compete with the Ruger 10/22). If you want a less expensive semi-automatic, the Marlin Model 60 is a solid option available at a fair price. If a semi-automatic rifle is not your cup of tea, then consider the Henry Repeating Arms H001 series of lever-actions (one of my favorites) or the Ruger American Rimfire bolt action.

Handgun: .22 LR Semi-automatic Pistols
Although the operation of a handgun shares some similarities to firing a rifle or shotgun, it's not exactly the same process. How the upper body and hands are used to support a handgun is different, as are the sight systems and placement of the external controls. The recoil is felt in your wrists and elbows instead of your shoulder. Handgun barrels are much shorter which brings the muzzle blast closer to your body. Handguns are not harder to master than rifles, it's simply that it requires a different set of skills and information.

Just as .22 LR rifles are a great place to start with rifle training, semi-automatic .22 pistols are an ideal option for those beginning to learn about handguns. As with rimfire rifles, .22 pistols fire inexpensive ammunition and the pistols themselves can be found for $300 or less. Starting off with a handgun that produces mild levels of felt recoil is important for another reason. Inexperienced individuals who start off with hard-kicking hand cannons can develop a flinch (jerking the hands back in anticipation of an uncomfortable level of recoil) which will be detrimental to shot placement. Starting with a low-recoil pistol and working your way up to more powerful options is the best way to avoid flinching and develop correct shooting techniques. And like the .22 rifles, you never really out grow rimfire pistols.

If .22 pistols have a down side, it's that they can be ammunition sensitive (learn more about ammunition sensitivity and what to do about it here). Also, .22 pistols (and rifles too) are not a good choice for personal protection or home defense. Although they can be lethal, their low power levels make them poor stoppers. If a rimfire rifle or pistol is all you have, there are ways to improve its performance for defense. But for the most part, they should be relegated to recreational uses only.

Rimfire pistols designed for target shooting can cost more but they are accurate, comfortable to hold and have smooth, light triggers. The Ruger Mark IV is an updated version of the company's classic rimfire pistol that is much easier to clean than previous models. The Smith and Wesson SW22 Victory is a modular target gun with interchangeable barrels. The new Kel-Tec CP33 has a quad-stack magazine that holds 33-rounds of ammunition.

For a less expensive all-purpose .22 pistol that also serves as an understudy for some center-fire pistols, consider the Taurus TX22. In the past, I would have told beginners and one-gunners to stick to semi-automatics instead of revolvers. The double-action revolvers (like the Smith & Wesson Model 63) have heavier triggers while single-actions (such as the Ruger Bearcat) tend to cost more than .22 semi-automatics. But that changed with the 2019 release of the Ruger Wrangler 6-shot single-action wheel gun. With a listed retail price of $249, it has a light, smooth trigger, will shoot just about any .22 LR load available and it’s fun to work with. If I had to pick just one budget friendly .22 handgun for casual plinking, this one would be at the top of the list.

Shotgun: Single-Shot Break Actions
Some shotgunning endeavors call for two or more rounds to be fired in quick succession, thus the popularity of double-barrel, pump-action and semi-automatic shotguns. But the often overlooked single-shot break action has real advantages for the beginner. It is light weight, rugged, and simple to operate. The action swings open to expose the chamber. This makes it quite easy to verify the state of the chamber or to demonstrate that the gun is unloaded to a range master. Unlike rifles and handguns, which need to be held perfectly still, shotguns need to swing up and side-to-side in order to hit targets moving through the air. Single-shots swing nicely because most of the weight is in the back near the shoulder. This helps beginners to master their swing without having to work as hard to manage the gun.

For those who want a utilitarian shotgun for pest control or small game hunting, single shots can cost much less than their multi-shot compatriots. Some models are easily separated into two sections while others actually fold in half for easy storage. However, this platform’s most notable limitation often relegates it to use as a novice and an expert's choice: it holds just one cartridge at a time. This makes quick follow-up shots highly impractical. Its low weight and no-frills design can also lead to increased levels of felt recoil with hotter loads. This is not much of an issue with .410 bore or 20-ga. models but it's something to be aware of with 12-ga options.

Single-shot break actions are not as prevalent as they used to be but they are still relatively easy to find if you look around for them. Play close attention to brand names while shopping. There are a good number of low quality imports that suffer from poor quality control and terrible triggers.

I've had positive results with the Savage Arms Stevens 301 series (made in China), including the standard configuration 20-ga. and the specialized .410 bore turkey gun. I also like the Iver Johnson Turkish folding single-shots which are available chambered for .410 Bore or 20-ga. shells in youth and adult sizes.

If you would prefer a single-shot with a nicer finish and walnut stocks made right here in America, Henry Repeating Arms is the company to check with. As of 2017, the company is offering adult size and youth models with a choice of polished brass or steel receivers. Caliber options include 12-ga., 20-ga. and .410 Bore.

END_OF_DOCUMENT_TOKEN_TO_BE_REPLACED

News, thank the women of the NRA, Refuse To Be A Victim
END_OF_DOCUMENT_TOKEN_TO_BE_REPLACED