Here are the most common types of malfunctions, why they happen and what you can do to clear the stoppage.

A few years ago I attended a women’s self-defense seminar at a range located about an hour north of where I live. At the beginning of the class, we were required to watch a short video featuring a young woman who lived alone. She arrived home from work, at night, tired. While unlocking her front door, she noticed a white van parked across the street. Because she knew all her neighbors’ vehicles and had never seen that van before, she became suspicious.

Now Inside her house, she became worried. She put down her handbag, picked up her handgun and pointed it at the door. Within seconds two men kicked down her door, forcing her to aim and fire at the intruders. She was OK; they were not.

On my long ride back, I couldn’t help but think about that video. She showed good situational awareness by noticing the strange van. She also knew exactly where her gun was (under the couch) so she could get to it quickly and easily. But what would have happened to her if her gun malfunctioned? The outcome could have been different.

Like anything else that’s man-made, guns malfunction from time to time. Here are the most common types of malfunctions, why they happen and what you can do to clear the stoppage:

Causes
Most pistol stoppages are related to ammunition problems, such as homemade reloaded ammo that was not properly created, or with factory ammo that is too weak to cycle the action. Semi-automatics can also be finicky; some models don’t like certain cartridge shapes and lengths. If this happens to you, it’s best to try different manufacturers and grains to find which one is the best fit, and causes the least problems. If you have tried a variety of ammo, and are still having problems, it’s best to bring your gun to a gunsmith.

Another cause of malfunctions is not cleaning and lubricating the gun often enough. I try to clean my guns after each use, and every few months I bring them to a gunsmith to have them professionally cleaned. 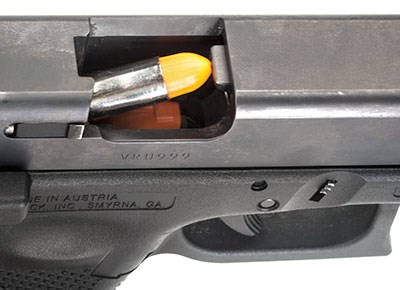 TIP-UP. This is one of the most common malfunctions in a semi-automatic pistol. A tip-up occurs when the round feeds from the magazine, but does not enter the chamber. Tip-ups are commonly caused by worn magazine feed lips or weak magazine springs. Try swapping out magazines. If other mags work just fine, you have isolated the problem to that specific magazine.

If the problem persists with different magazines, try switching loads to see if failure occurs with certain loads (loads with a short overall length can also cause tip-ups).

DOUBLE-FEED. This problem occurs when one round moves into the chamber just fine, but then another cartridge behind it wants to hone in on the action. This is otherwise known as the Pauli Exclusion Principle – two things cannot occupy the same space at the same time. But the end result is one round in the chamber with another round jammed up against its base. This will stop the slide.

STOVEPIPE. The first time this happened to me, I had just started shooting, and it alarmed me! ! I been shooting for a only few months, with a women’s shooting league, and had borrowed another woman’s handgun. (They were gently teasing me because I was happily plinking away with my Ruger Mark III Hunter .22, and they said I needed to shoot a “real” gun.) 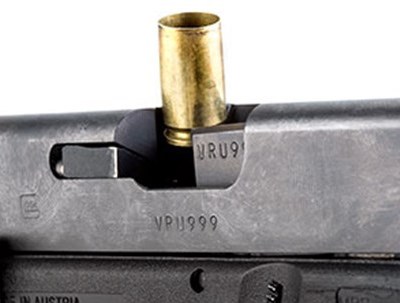 This malfunction occurs when you’ve fired the gun, but the fired case does not completely clear the gun after being extracted from the chamber. The empty cartridge ends up being trapped inside the ejection port and sticks straight up, resembling a smokestack.

What causes this to happen? A number of things:

ACTION STEP: While holding the gun firmly with your firing hand, take your finger off the trigger. With your support hand, firmly and quickly move the slide back and turn gun downward to clear the empty case. Depending on how stubborn the shell is, you may have to invert the gun and vigorously rack the slide a few times to dislodge the empty case.

SQUIB LOAD. This type of malfunction occurs when the cartridge doesn’t have enough powder to completely propel through the barrel and onto the target. Squib loads can be diagnosed when reduced recoil or muzzle blast is felt. In addition, squib loads have a distinct “poof” sound; in other words, the “bang” is more subdued than normal. Some squib loads fully eject, but often they get stuck in the barrel.

ACTION STEP: If you suspect a squib load, grab a flashlight and shine it through the barrel (from the feed ramp side, NOT the muzzle or front end of the barrel from which the round exits). If you don’t see any light coming out the other end, a round is stuck in the barrel. If this is the case, use a cleaning rod to push the stuck round out. If the bullet is really stuck in there, take the gun to a gunsmith.

American Rifleman | Self-Defense Revolvers: Are They A Good Choice?

END_OF_DOCUMENT_TOKEN_TO_BE_REPLACED

News, thank the women of the NRA, Refuse To Be A Victim
END_OF_DOCUMENT_TOKEN_TO_BE_REPLACED