Osa Johnson: Always in the Thick of It

Osa Johnson: Always in the Thick of It

A rough and tough explorer, she stopped stampedes and felled ferocious felines, while documenting her adventures with a crank camera.

Ever had a man tell you you’re too small to handle a heavy recoiling gun? Osa Johnson apparently never received that “helpful advice.” Despite her small stature, she didn’t shy away from big calibers. Two of her favorites were the .405 Winchester (the same caliber as Teddy Roosevelt's “Big Medicine”) and the .470 Nitro Express, both of which she relied on heavily during her globe-trotting adventures (put in terms of more common cartridges, they recoil like a .375 H&H and .458 Winchester respectively). 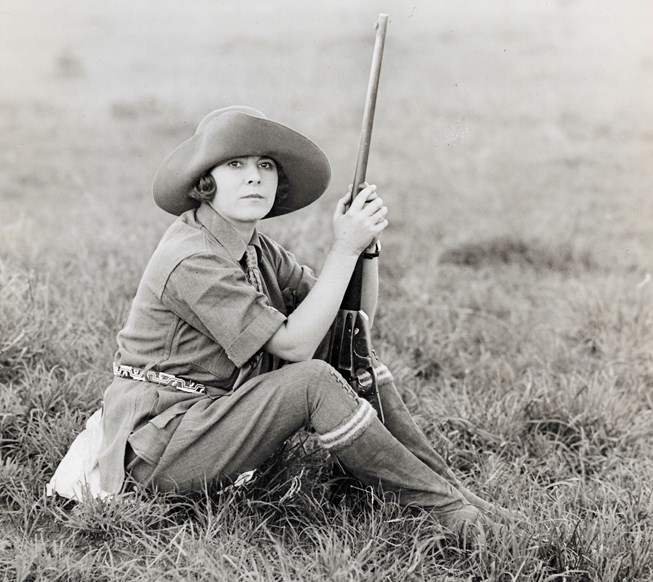 Osa holds an 1895 Winchester in .405, one of three that the Johnsons took on their 1924 Africa expedition. (Photo Credit: Martin and Osa Johnson Safari Museum)

Almost always pictured with a beaming smile, Osa, born in Chanute, Kansas, in 1894, traveled through the South Pacific and Africa with her husband Martin as pioneers in filming native cultures and wildlife in the 1920s and 1930s. The couple embarked on their first expedition together in 1917, traveling to the South Pacific. The pair were determined to document the cannibalistic tribes that were said to inhabit several of the islands. In her book "I Married Adventure," Osa mentions taking with them “one hand-cranked Universal motion picture camera, one 5x7 Graflex, one 4x5 Graflex, plates for the still cameras, Jack London’s original 30-30 Marlin rifle, [and] two automatic revolvers” (the rifle was given to Martin by the famous author, whom he sailed with a decade earlier. “Automatic revolver” was the contemporary term for a revolver that ejected its spent cases all at once when the action was opened, versus one at a time).

Four years later, after producing a number of films about their Pacific island expeditions, Osa and Martin decided that they would travel to Africa to produce similar documentary work. Upon arriving in Nairobi, an East African game warden, famed hunter Blaney Percival, asked them if either could shoot. Martin insisted they weren’t going on a hunting expedition, but only to hunt the animals with their cameras.

As documented in "I Married Adventure," Percival responded, “I know, you’re not here to shoot game, but you can’t safely carry that ideal to extremes. There are times when almost any wild animal is dangerous—you know when hungry, during mating season or guarding its young; sometimes even when you disturb it in its sleep—and every now and then it will be a question of its life or yours. That’s to be expected.”

So, Osa, despite her limited hunting experience, took it upon herself to learn to shoot so she could stand guard while her husband cranked their motion picture camera.

The variety of wildlife in Africa never ceased to amaze the adventurers. They settled down in Kenya for four years, getting to know specific elephant herds and lion prides. During this time Osa defended her husband, their crew and equipment with her rifle—Cape buffalo bursting from the bush, a pouncing leopard, lions intent on having the photographers for a meal and her relentless adversary … hyenas.

In "I Married Adventure," Osa recounts an encounter with elephants they were filming:

“My husband moved slowly toward the herd. They were unaware of us. I cranked steadily admiring the magnificent creatures and wishing it were possible to photograph in color the rich shades of their big gray bodies against the tawny yellows of the veldt. With too great suddenness, perhaps, the largest bull saw Martin. Startled, he spread his ears, raised his trunk, shifted uneasily, snorted—and charged!

True to our pact I kept on grinding; I kept screaming too, and my gun-bearer stood ready at my side with my rifle … One part of my brain told me that this would be a magnificent picture [the rest of the herd had joined in the charge], the other told me that unless I brought the lead elephant down, Martin would be trampled. I snatched my gun and fired. I have no recollection whatever of even stopping to take aim–and the big animal faltered and fell not fifteen feet off to the side from where we stood.”

The Johnson’s battery of firearms reads like a Who’s Who’s of classic pre-World War II African rifle and cartridge combinations. An inventory from their 1924 expedition lists 18 firearms, including three Winchester Model 1895s in .405, three Thomas Bland .470 Nitro Express double rifles, two Jeffery Mausers in .404 Jeffery, a Rigby Mauser in .505 Gibbs, a custom 1903 Springfield in .30-06, a full-stocked Thomas Bland Mauser in .275 Rigby (7X57 Mauser), a Winchester 1892 in .32-20 and a collection of American-made shotguns and revolvers. In later expeditions Osa would be pictured with a Steyr-Mannlicher Schoenauer. In the early 1930s the couple purchased at least one Oberndorf Mauser Type A sporter in 9.3X62 mm. Based on photographs and Osa’s writings, it would become her go-to rifle over the next decade. 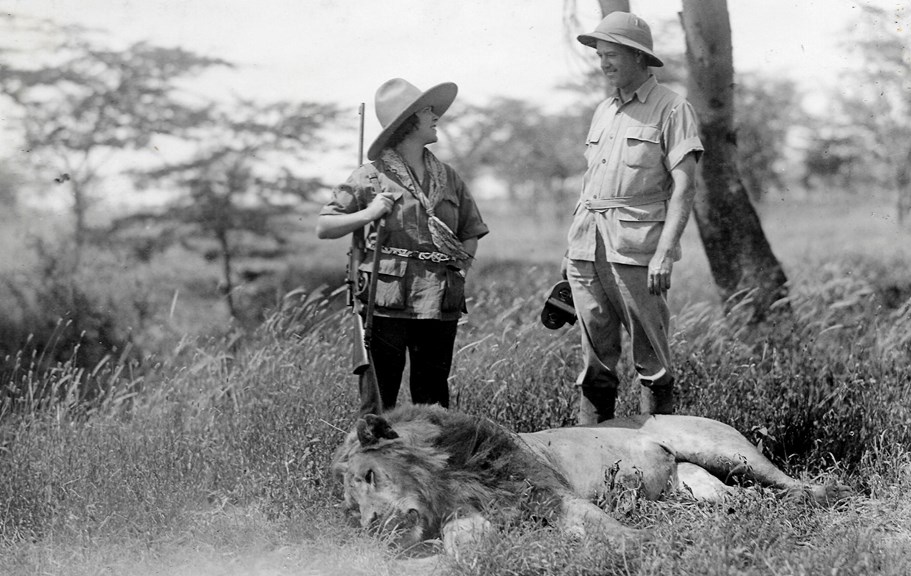 Osa takes a lion with her custom 1903 Springfield in .30-06, often providing safety for her husband Martin who was filming the wildlife. (Photo Credit: Martin and Osa Johnson Safari Museum)

Not trophy hunters, the animals killed were used for food, clothing and footwear for their massive crew (which could number in the hundreds) and donated as museum specimens. Osa kept the camp supplied with meat: antelope, gazelle, warthog, game birds and fresh fish.

In her book "Four Years in Paradise," Osa quotes Martin as saying, “… Osa furnished the camp with game and fish. It was strange, her talent for these arts, for she came from an inland and rather dry country. But all her ancestors were quick with rod and rifle: she always came in smiling and happy with her catch …”

Thousands of photographs and feet of film document their experiences. In one intense scene Martin captured on film, Osa stops a charging rhinoceros only twenty yards away with one shot from a double rifle, presumably a .470 Nitro Bland. Osa and Martin’s African safaris resulted in numerous films that were showcased worldwide. They developed friendships with Kodak’s George Eastman and the renowned museum taxidermist Carl Akeley, both who spent time with the couple while they worked in Africa.

Feeling that they needed a different “angle” from which to capture footage for their films, Osa and Martin learned to fly. In 1932 Osa got her pilot’s license and was outfitted with her own Sikorsky S-38-BS amphibious plane, which she had painted in zebra stripes and Martin christened “Osa’s Ark.” 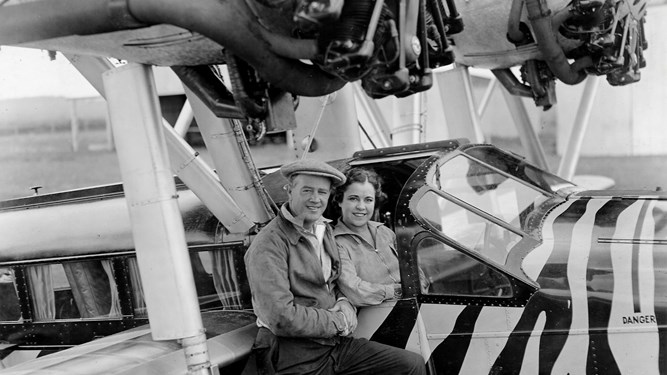 In 1934, as adventurer celebrities, they were the first couple to be featured on a box of Wheaties cereal, with Osa (who holds her rifle in the photo) being the second woman to be appear on “The Breakfast of Champions.” Together the pair toured the United States, giving lectures and interviews, writing books and releasing epic documentary films that illuminated American movie screens with the wildlife that inhabited the continent across the Atlantic Ocean. 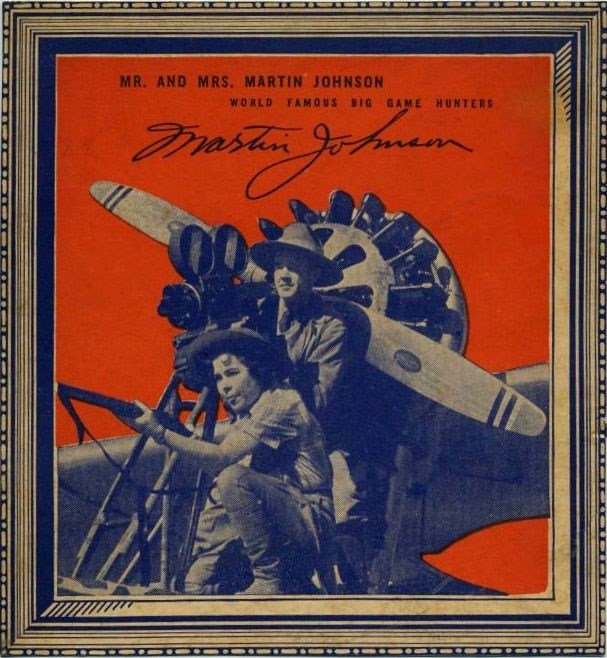 Tragically, Martin and Osa were involved in a commercial plane crash in 1937. The crash ended up being fatal for Martin, and it took Osa a long time to recover from her injuries. She continued to share the stories of their experiences through books and a TV show and later became a fashion designer, debuting a clothing and jewelry line. Osa’s autobiography, "I Married Adventure," was the non-fiction bestseller in 1940.

Osa Johnson, the girl who left Kansas at age 16 to explore uncharted territories, kept her and her husband’s dreams alive: hunting animals with their cameras, while keeping a keen eye on their subjects and a big-bore rifle close at hand. She passed in 1953 from a heart-attack.

For those wanting to learn more about the Johnsons and view a collection of the artifacts they brought back from their travels, the “Martin and Osa Johnson Safari Museum” in Chanute, Kansas, is dedicated to preserving their memorable accomplishments. Among the museum’s artifacts is the Johnson’s .30 WCF Model 1894 Winchester carbine. Many of the Johnson’s films and books are available through the museum’s gift shop.

END_OF_DOCUMENT_TOKEN_TO_BE_REPLACED

News, thank the women of the NRA, Refuse To Be A Victim
END_OF_DOCUMENT_TOKEN_TO_BE_REPLACED