Release the Hounds ... and the Retrievers and Pointers and Spaniels!

Release the Hounds ... and the Retrievers and Pointers and Spaniels!

Read on to learn some lesser-known facts about woman’s best friend.

There are many different breeds of hunting dogs, all with their own unique characteristics and abilities. I grew up around German shorthaired pointers competing in field trials and Labradors trained to retrieve waterfowl, but did you know that dachshunds and poodles are also hunting dogs?

Hounds
Tracking, stalking and chasing are just a few of the skills that hunting hounds possess. Hounds typically see or sniff out prey and then give chase. Some hounds, like sight hounds, will work independently and finish off their game once it’s caught; other hounds, like beagles, are trained to track but not kill the quarry.

Sight Hounds
Sight hounds are characterized by their excellent eyesight and incredible speed. When you hear the word “greyhound,” you might immediately think of racetracks, where the dogs are trained to pursue an electronic lure such as a stuffed rabbit, reaching incredible speeds of up to 45 miles per hour. Because of their thin heads and placement of the eyes, these impressive animals have a 270-degree range of vision, so they can, to an extent, also see objects behind them ... and more than half a mile ahead of them. 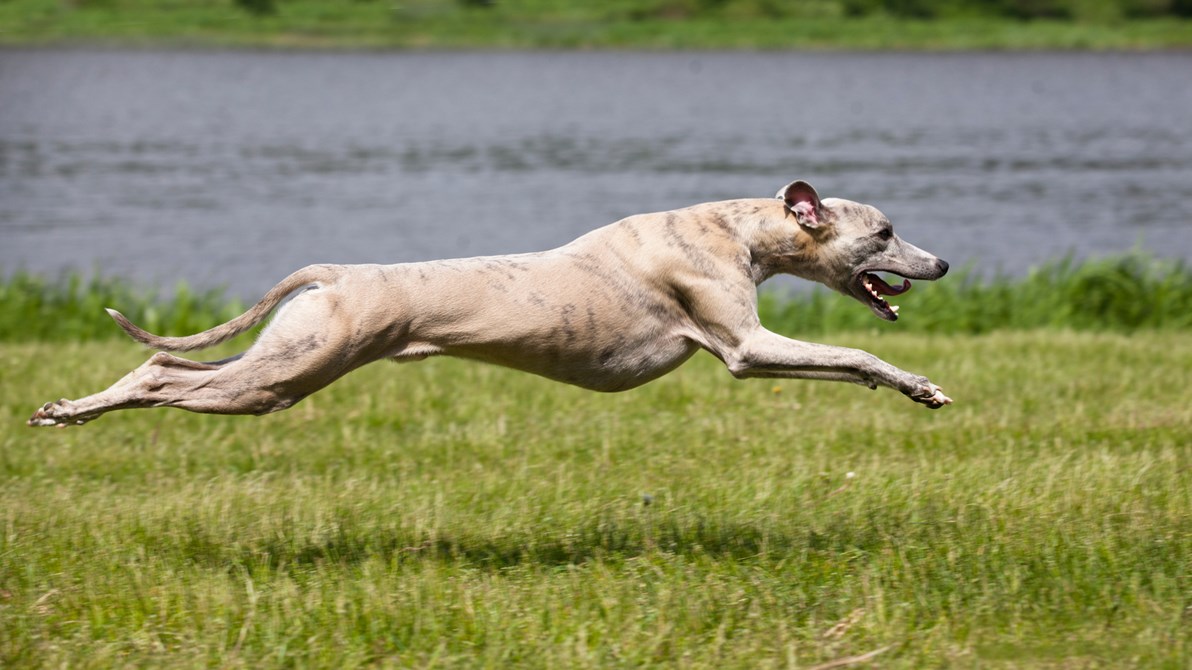 Greyhounds are typically trained to hunt rabbits, foxes and deer, but some hunters prefer to use slower dogs when rabbit hunting. Slower dogs, like scent hounds, will only track the rabbit, allowing the hunter to shoot it. A greyhound will most likely catch and kill the rabbit before the hunter has a chance to harvest it. Other breeds of sight hounds include, but are not limited to: Irish wolfhound, saluki, borzoi (Russian wolfhound), Scottish deerhound, Afghan hound, Magyar agar.

Scent Hounds
Scent hounds operate differently from sight hounds. They track their quarry by scent, slowly following the trail and sometimes barking or “baying” periodically so that their hunter can follow them. One surprising breed of scent hound is the dachshund. Dachshund literally means “badger dog” in German; “dáchs” means badger, and “húnd” (similar to hound) means dog. Their name stems from their long history of rooting out badgers, rabbits, foxes and other underground-dwelling animals. 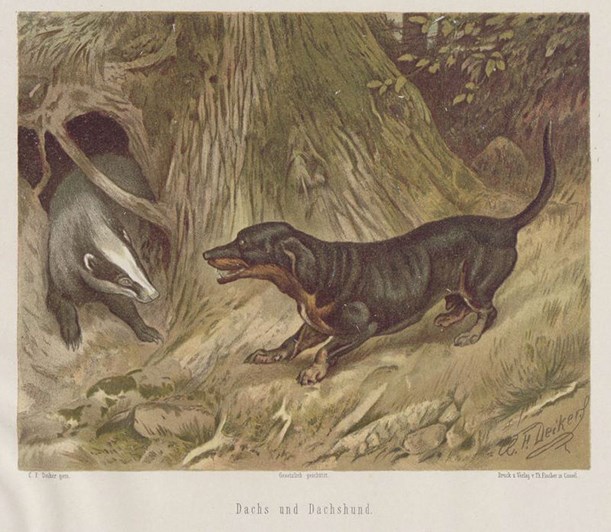 Although dachshunds are the butt of many sausage jokes, they are loyal and courageous pets that, if properly trained, can track larger wounded game. Something most scent hounds have in common are long ears. It has been theorized that their drooping ears help funnel scents towards their snout. Some of Dachshund’s fellow scent hounds include: bloodhound, basset hound, beagle, basset griffon, American English coonhound and many others. 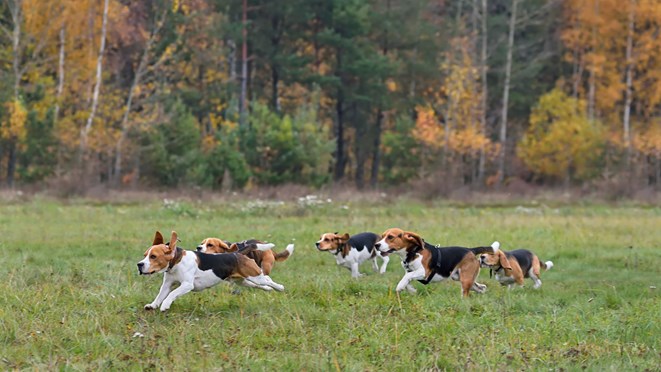 Gun Dogs
Also called bird dogs, “gun dog” is an umbrella term for many different breeds that excel at pointing, flushing out or retrieving prey. Depending on the hunter’s desire and the dog’s training, some canines expertly perform one task; others are adept at a mix; some can even do all three. This group is known as “versatile,” and includes some of the common hunting breeds such as the Weimeraner, viszla and Brittany. 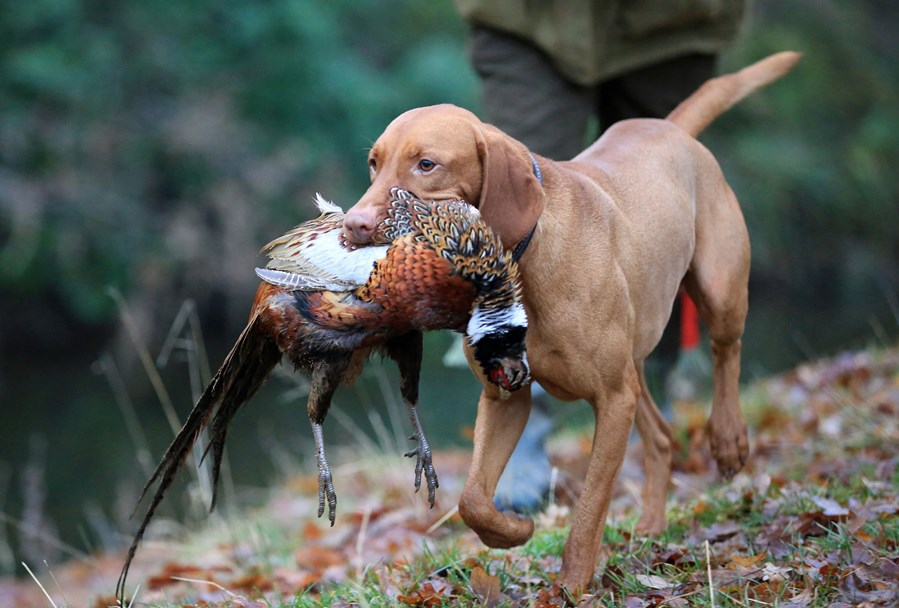 Although many breeds have their own field trials, or competitive athletic events for dogs, gun dogs are among the most well-known. In these competitions, the dogs perform their hunting skills in a trial setting. The dog that demonstrates the breed’s best qualities will win ribbons. Below are the three major tasks expected of gun dogs and the breeds known to excel at each. 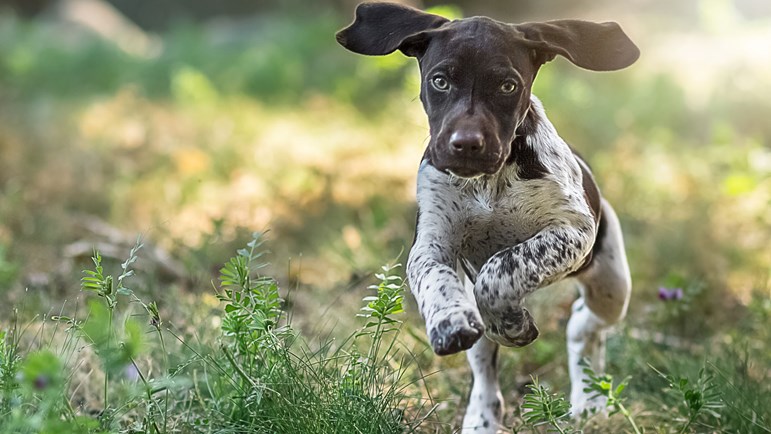 Point
Pointers have a high prey drive, and are typically friendly and protective. These dogs “point” out prey, most often birds, by sticking their nose in the direction of the prey, becoming still as a statue, then raising and bending one of their front paws. Although this may seem like something the dog was trained to do, it can be instinctual, especially if the breed has a history of hunting. Many dogs assume this position when they sense prey or danger without training, even as puppies. German shorthaired pointer, English pointer, vizsla and Portuguese pointer are just a few common breeds of pointers. 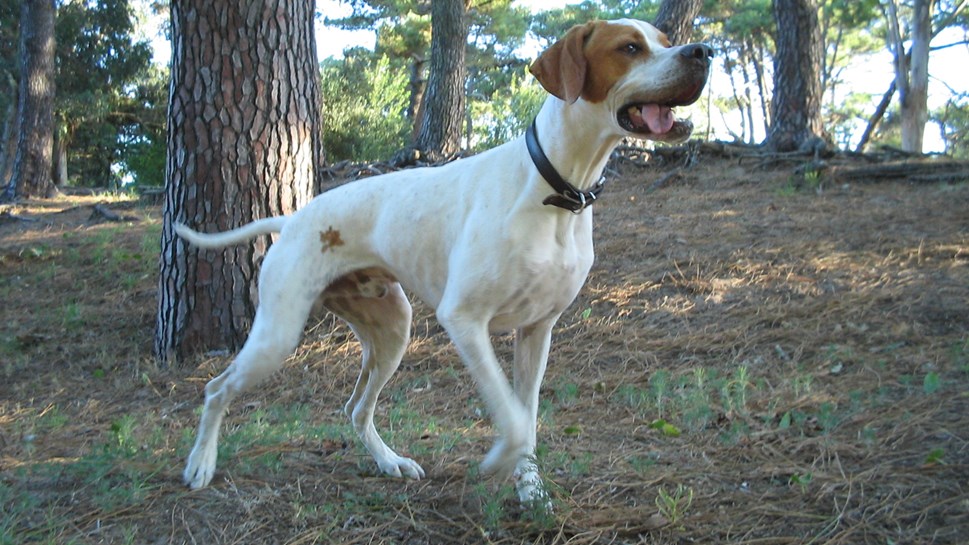 Flush
Spaniels and setters are both brilliant breeds for locating and dispersing prey. Like pointers, these dogs will freeze while pointing in the direction of the quarry. Only when the hunter gives the OK will the dog then tear through the field, sending birds flying. Spaniels, especially, might also get low to the ground and creep toward their prey, as an indication to the hunter that game is afoot! Some spaniels are also adept water dogs, which will be addressed shortly. 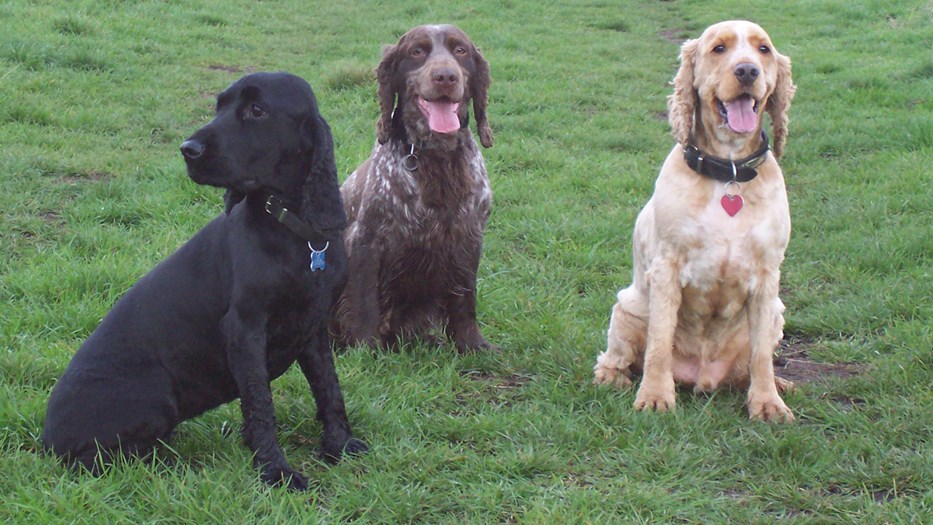 Retrieve
The brainiacs of the group, retrievers are typically very intelligent. They have to carefully watch and locate fallen birds, sometimes over a span of hours, before being able to retrieve all of the game post-hunt. Retrievers are also characterized by their firm, but gentle grip. You may have seen the viral Golden Retriever Challenge on social media in which dog owners give their Goldens a raw egg, and the dog holds it in its mouth without breaking it. However, it becomes clear that these are house pets, not hunting dogs, when the owners can’t get the dog to let go of the egg. Alternatively, the dog is happy to let go of the egg, mid-air … so that it splats on the ground. 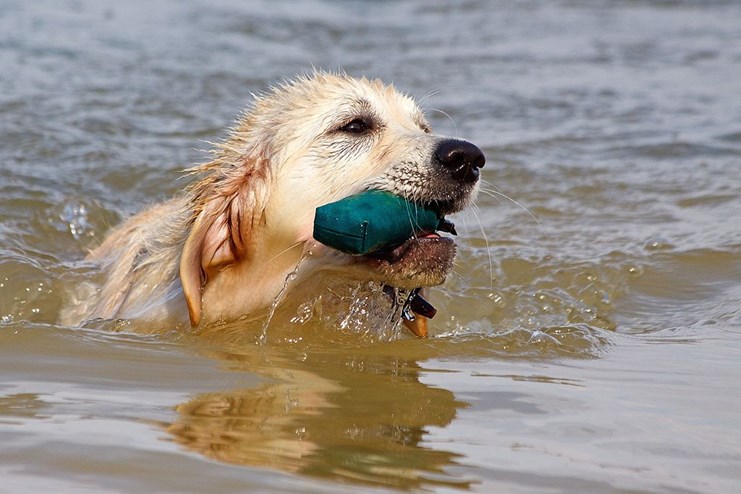 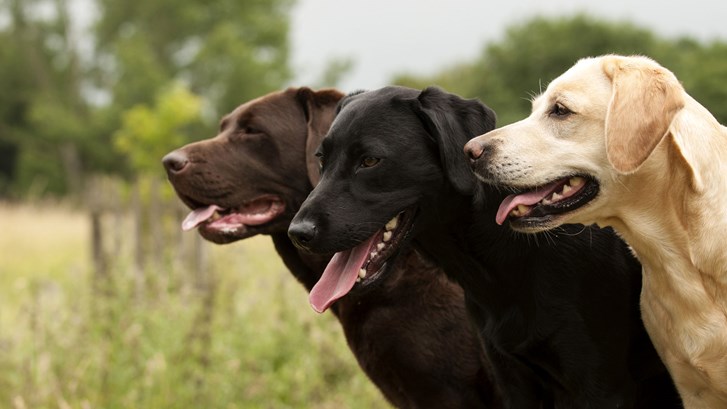 Some retrievers are just as capable of recovering prey in the water as they are on land. Labrador retrievers, Chesapeake Bay retrievers, standard poodles, Newfoundlands and Nova Scotia duck tolling retrievers are among the water dog breeds that excel in waterfowl hunting. As mentioned previously, some spaniels are also impressive water dogs that are skilled swimmers and happy to retrieve from boats. One obvious example is the American water spaniel.

Terriers and Curs and Feists, Oh My!
These dogs all hunt a little differently than the hounds and gun dogs. Terrier breeds like the jagdterrier are tenacious, and will attack smaller, ground-level prey for their hunter. They can also root their prey out from underground, not unlike a dachshund. However, they don’t have the characteristics necessary of sight or scent hounds. Larger terriers are capable of holding down sizeable prey, such as feral pigs, until the hunter approaches to make the kill shot … so they still make great hunting dogs. 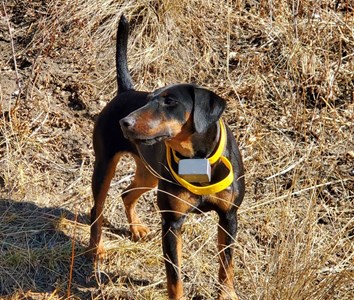 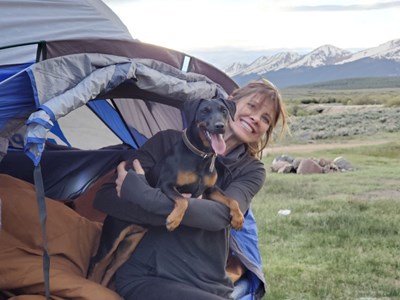 A cur is usually associated with “treeing.” This is where the dog chases a quarry, usually a squirrel, up a tree and barks at it until the hunter comes to shoot it down. They can also take down boar and cougars, similarly to a terrier, only on a larger scale. An all-purpose dog breed, curs include: Catahoula leopard dog, Treeing Tennessee brindle, black mouth cur, mountain cur. 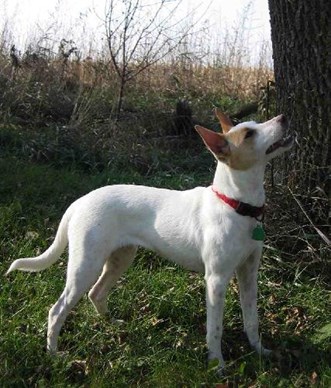 Feists (shown right) are also capable treeing dogs. Since the feist is so small, squirrels are about all they can handle. Though, they can be successful vermin hunters on a farm or ranch. They were bred in the South and descended from terriers, hence their feisty nature.

In this article
Hunting Dogs, Lifestyle

NRA Women | Release the Hounds ... and the Retrievers and Pointers and Spaniels!

END_OF_DOCUMENT_TOKEN_TO_BE_REPLACED

Why You Should Do Dry-Fire Drills

What’s dry fire? Why, only the cheapest and easiest way to train …

It's a natural match to win some National Matches!

Kim Rhode has been named the most successful shotgun shooter of all time by the International Shooting Sport Federation. She competes in skeet and double trap and she's the first individual athlete to medal in five straight Olympics, where she's won three golds, one silver and a bronze.

END_OF_DOCUMENT_TOKEN_TO_BE_REPLACED

News, thank the women of the NRA, Refuse To Be A Victim
END_OF_DOCUMENT_TOKEN_TO_BE_REPLACED