Confused about which optic is best for you? Learn the differences between the most common types of rifle sights to help you decide which unit is best for your shooting situation.

No matter how good a rife and ammunition combination may be, it won't do you much good if you can't hit your target. Thus the art and science of devising the best means to properly aim a rifle is as old of an endeavor as improving firearms themselves. Today's rifle sights incorporate proven centuries old systems installed side-by-side with cutting edge technologies. Here's a high-level view of the major types of rifle sights currently available and the advantages they offer. 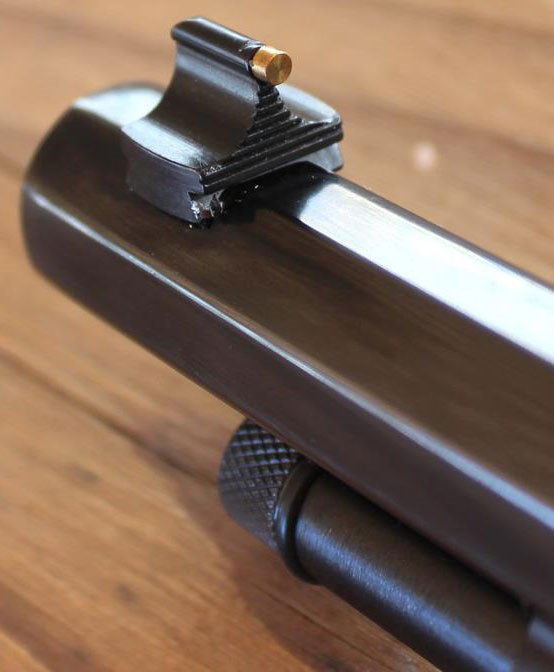 This front sight is enhanced with an easy-to-see brass bead.

Also known as iron sights, open sights are the oldest type of sight system and are still in common use today. With a few exceptions, most firearms of every type leave the factory with a set of open sights installed. They consist of two parts. The front sight is located near the tip of the barrel. It can be a blade, block or an adjustable post that the shooter focuses on when aligning the rifle with the intended target. Some front sights are enhanced with plastic inserts, brass beads, fiber optics or tritium lamps to make them easier to see. 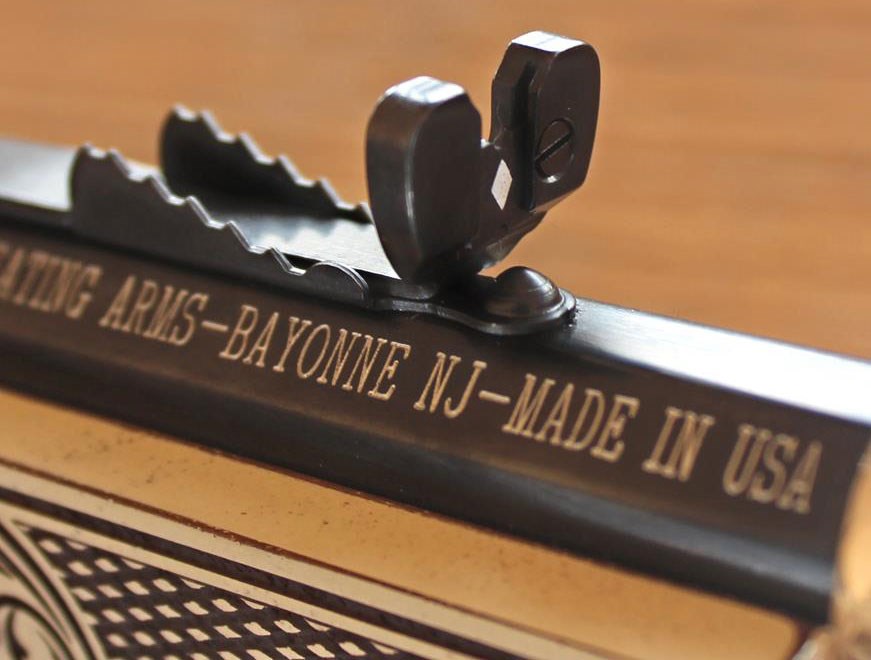 The buckhorn rear sight is fully adjustable for height an windage.

The front sight is paired with a rear sight that is usually mounted on the top of the receiver or at the back end of the barrel. Rear sights tend to be of two types: notch or aperture. Notched rear sights have a square, V-shaped or U-shaped cut out that is aligned with the front sight to form the sight picture. An aperture, or peep sight, is a rounded piece of metal that has a hole in the center. The shooter looks through the hole, or aperture, to focus his or her eye on the front sight. Iron sights are still in use today because they are light weight, rugged and reliable. They hold up nicely in harsh weather and no batteries are required. They can be used as a primary means of aiming or they can serve as backup sights if a rifle's scope breaks in the field. 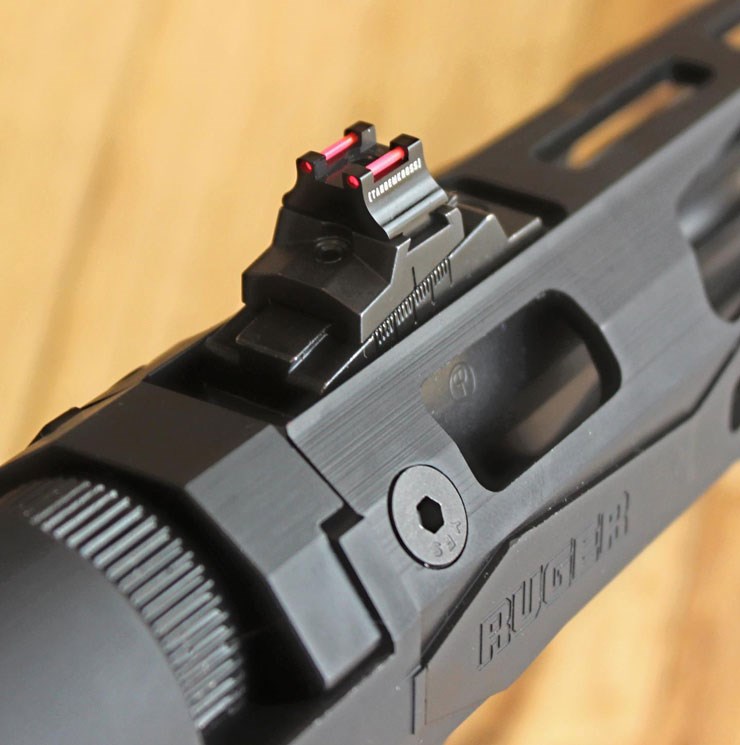 This rear sight is outfitted with light gathering fiber optics.

But they do have their limitations. They are not as precise as some other sight systems and they are difficult to shoot accurately much past the 200-yard mark. They offer no magnification and they are not nearly as effective as a scope in low light situations. 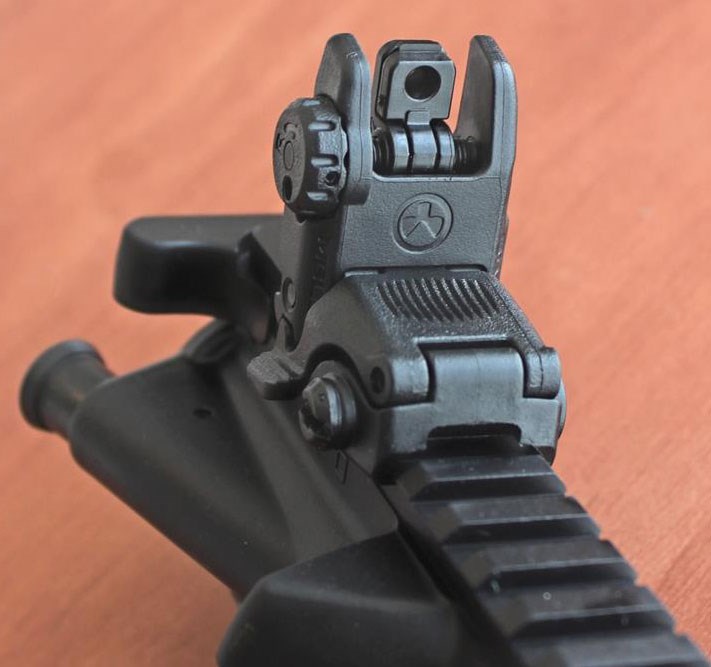 Aperture sights like this one are a popular option for AR-15 semi-automatic rifles.

Laser Sights
A laser sight is an electronic sight system that projects a focused beam of colored light to form a bright dot of light on the target. Lasers come in different colors but red and green are the most common for laser sights with each having their own advantages. Red lasers cost less to purchase and they don’t demand as much power from batteries. But they are harder to see in daylight conditions. Green lasers are easier to see at greater distances and in brighter lighting conditions but they tend to cost more and use up batteries more quickly. 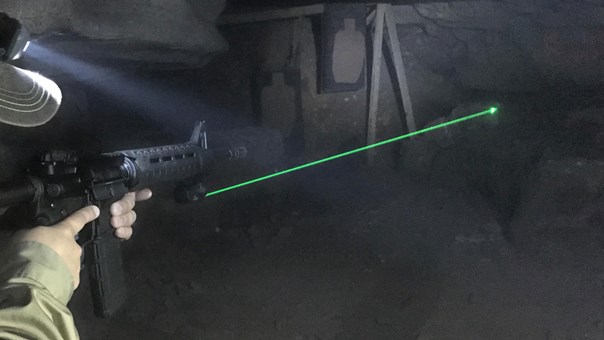 Laser sights allow for quick aiming, especially in low light situations or when the person operating the gun needs to move around. The bright laser dot shows where the gun is pointed and can be used to aim even if the operator's eyes are not lined up exactly with the top of the rifles receiver. It can help to get the gun back on target for accurate follow-up shots.

This sight system is more flexible in regard to where it can be installed on a rifle. A laser can be fitted into a replacement grip, wrapped over a receiver or housed in a small box that can be clamped to an accessory rail. Some include a flashlight function as well. Lasers can also be useful for training since the movement of the laser on a paper target can indicate if the user's trigger control needs improvement.  Modern laser options are designed to work it harsh environmental conditions and they are available at a wide range of price points.

As useful as they can be, using a laser sight will not compensate for poor shooting technique. If you flinch or jerk the trigger, you'll miss just like you would with any other sight system. Because they are electronic devices that rely on battery power to work, it's best to be prepared to switch over to a set of iron sights if the laser winks out.  For the most part, laser sights are useful to civilians for training at the shooting range or for up close and personal defensive situations.

Red Dot Sights
Red dot optics are electronic reflector, or reflex, sight systems designed to be mounted to the receiver of a rifle. Looking through the clear lens does not magnify the view down range. Instead, the lens serves as a reflector for a focused beam of light from a light-emitting diode (LED). The shooter sees a red or green dot of light in the center of the lens that serves as an aiming point. Unlike a laser sight, the dot is only visible to the person holding the gun. Move the dot over what you want to shoot, much like a front sight, and take the shot. 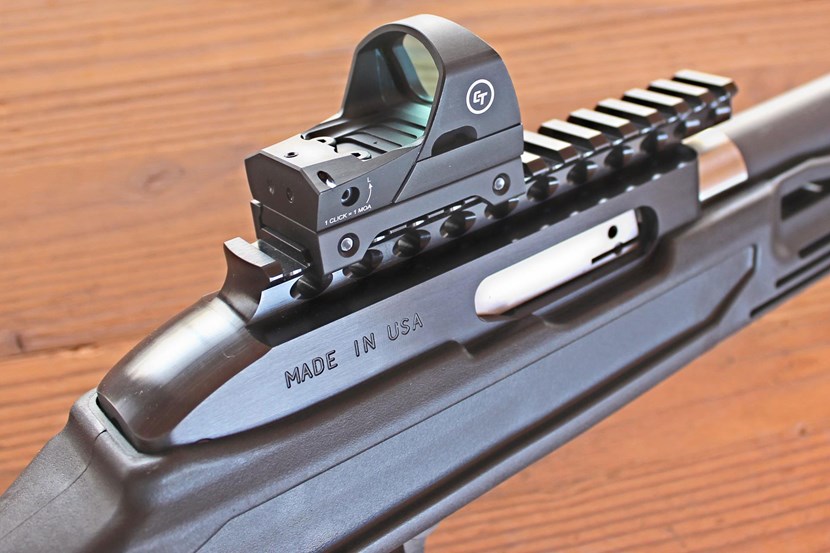 Red dot optics can be compact and light weight.

These sight systems aid shooters in forming a sight picture more quickly and easily than when using iron sights. Red dots offer a wide field of view and they can be used with both eyes open allowing for a better view of the surrounding area. The bright dot of light is more intuitive to focus on and it’s clearly visible in most lighting conditions. Like iron sights, the lack of magnification shortens the useful range of red dots to short and mid distances. Well-made optics are much tougher than they used to be but they are still electronic devices. Most models don't have any kind of cross hairs or aiming reticle, so if the battery runs out in the field you’re out of luck if you don’t have a set of iron sights. The best strategy is to keep a spare battery handy, just in case.

Scopes
Telescopic Sights, more commonly called rife scopes, are by far one of the best recognized and respected sight systems for mid- and long-range shooting endeavors including hunting, competition and target shooting. These optics are literally little telescopes with sets of lenses that magnify the view of the target anywhere from 1.5 times to 80 times what the naked eye can see unassisted. The person using the scope closes their non-dominate eye and looks through the scope with the dominate eye. Inside is a reticle, or a set of crosshairs, used for aiming. 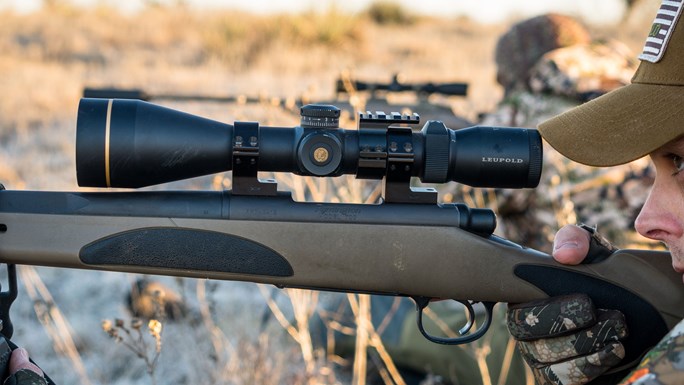 Rifle scopes are available in a variety of shapes, sizes and price points.

Rifle scope options are quite diverse and specialized for different environments and uses. Fixed power scopes are simple and tough but only offer one level of magnification that can't be changed. Adjustable scopes allow the magnification to be increased or decreased based on the distance to the target. Some models are available with illuminated reticles that glow much like the dot of a red dot optic.

A scope can be a useful addition to just about any rifle for target distances ranging from 50 yards to more than 1,000 yards, depending on your gun and ammunition combination. Because of their popularity, scopes are readily available from many reputable manufacturers at a variety of price points. Most rifles leave the factory configured to accept a scope. 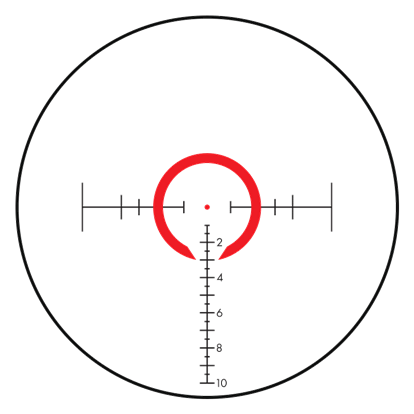 Despite their usefulness, scopes do come with some tradeoffs. They add bulk and weight to a rifle. At higher magnifications, it takes more effort to orient the rifle with the target because you can't see its surroundings as well. And even though high quality optics can provide years of service, they are susceptible to weather and impact damage. A rifle is likely to keep working if dropped or knocked on a hard surface, but the scope may be knocked out of alignment or broken from the impact. Scoped rifles need to be handled and stored with care.

END_OF_DOCUMENT_TOKEN_TO_BE_REPLACED

News, thank the women of the NRA, Refuse To Be A Victim
END_OF_DOCUMENT_TOKEN_TO_BE_REPLACED