One of the most common mistakes made by first-time shooters is gravitating toward the smallest, lightest option they can find because “it will be easy to conceal and even easier to shoot.” If I had a dollar for each time I have heard this I’d be sipping piña coladas in Maui instead of working multiple jobs and counting the ever-growing grey hairs on my head.

Women especially tend to shy away from—or more likely are steered away from—steel-framed guns in general, regardless of the intended application, and instead are handed the lighter and smaller polymer-framed guns. Chances are high that if you ask a male gun store clerk for his recommendation on a new handgun, there will probably not be a steel-framed option among his selections. You have better odds of being offered a pink snub-nosed revolver. 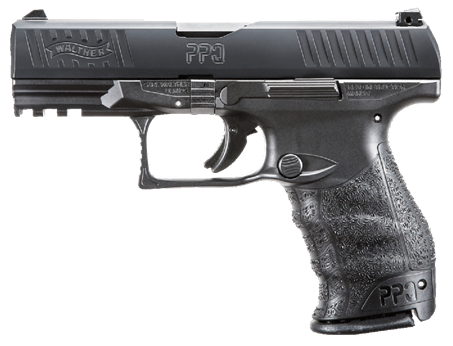 Don’t get me wrong. My primary carry gun has always been the polymer-framed Walther PPQ or PPS—which are half the weight of their steel framed counterparts. While there’s a time and a place for the small and lightweight carry guns, along with a plentiful selection of wonderful options, a first-time shooter should know the pros and cons of each option. Ladies, size matters. A small gun is no doubt easier to conceal, and so lightweight it’s almost easy to forget it’s on your hip. But, that all comes at the cost of felt recoil with each shot.

Although there are exceptions with some larger polymers, because of its weight, a steel-framed option will better absorb the recoil of each shot. You will find the gun will have less “snap,” which translates to getting on target even faster for a follow up shot. The ultra-light micro pistols may leave your hand a tad sore, and you will certainly be taking longer in between each shot to once again acquire your target. When seconds matter, that is not a situation you want to battle.

For a concealed-carry gun, you should choose something you enjoy shooting. This is important because, as with any activity you do not enjoy, you are not going to dedicate the time necessary to becoming more proficient at it. In the case of a gun that hurts your hand when you shoot, you will avoid the range and thus avoid the practice essential to good gun-handling skills. 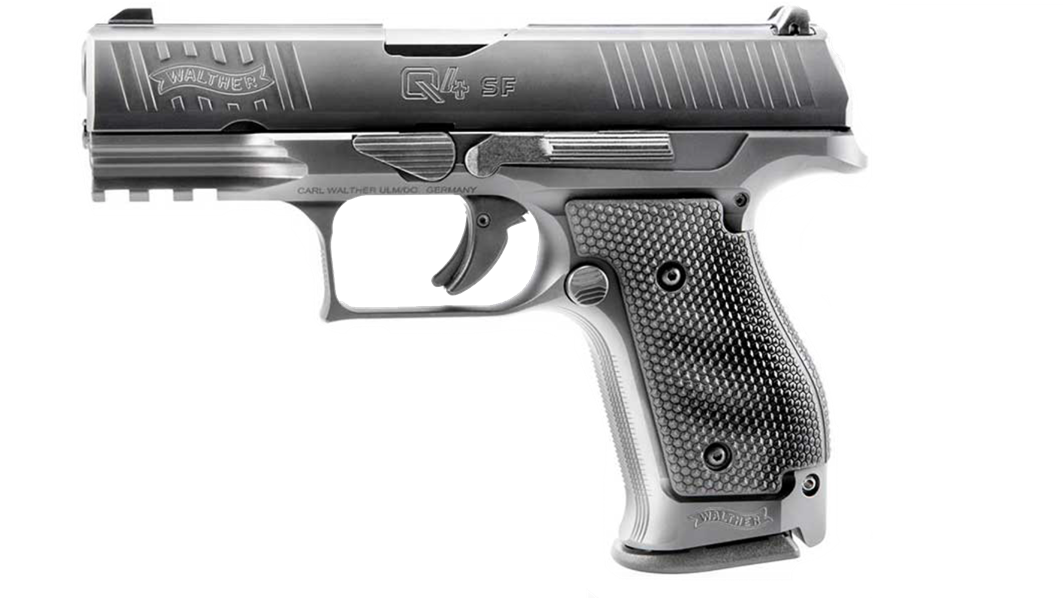 In my business, many guns come my way, giving me the opportunity to test and evaluate new models. Among the steel-framed pistol options introduced in 2020 is the Walther Arms Q4 Steel Frame 9 mm pistol, which joins its big brother, the Q5 Match Steel Frame, as one of the standout models of the year so far. The Q4 Steel Frame covers all the bases to make this a viable carry option. The pistol’s overall size is comparable to many of the compact 9 mm polymers, with an overall length of 7.04” (4” barrel); a 1.3” width; and 5.4” height. Its hearty weight—nicely balanced throughout the steel frame—make this an ideal candidate for a sturdy everyday carry belt. At 49.7 ozs. loaded (39.7 ozs. empty), recoil is drastically reduced, which ultimately contributes to overall shooting efficiency. This pistol won't let you forget that it has your six.

Standard capacity on this model is 15 rounds (10-round state-compliant mags are available). The Q4 SF is also offered in a threaded-barrel option to accommodate a sound suppressor. The pistol ships with a generous supply of three magazines.

Range day brought about a bit of steel-on-steel action, as we practiced drawing from a holster from a defensive distance of 10 yards onto our Challenge Targets 10-inch gong. As an aside, if you are looking to add variety to your training regimen because, let’s face it, shooting paper can get boring, check out Challenge Targets, which offers a selection of steel targets that you can incorporate into general target practice to competition shooting.

As with all guns, it is important to try a variety of ammunition types, as not all guns like all ammunition. One brand may feed more reliably, while another may prove to be more accurate. The ammunition of choice for this particular training session was from Black Hills Ammunition. Provided were three different varieties of 9 mm, which all ran flawlessly through the Q4 SF: 115-gr. JHP; 100 gr. Honey Badger; and 115-gr. JHP EXP.

As you can see from our paper target, grouping was top notch for the application at hand. I would have no reservations carrying this handgun/ammunition combination on a daily basis, and also would not hesitate to fill each of the included three magazines with it for a USPSA or Steel Challenge match. For those at home who are keeping score, this particular model favored the 115-gr. JHP EXP.

It is also important to note that during our entire range session, regardless of ammunition type, the pistol shot flat, and the weighted steel frame greatly absorbed the recoil after each and every shot, allowing us to get back on target in record time. Also aiding in comfort was the extended beavertail and wrap-around grips, allowing all 49.7 ounces to settle nicely into the hand.

This handgun comes standard with Walther's phosphoric sights, however an Optics Ready version of this pistol is available. Lastly, a Picatinny rail forward of the trigger guard gives you the option of mounting a laser or flashlight. 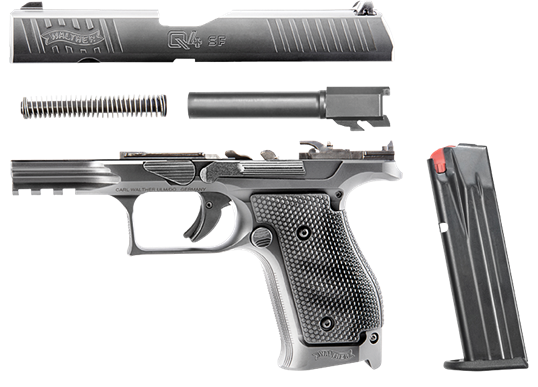 After the fun was over, it was time to bring the gun home for a thorough cleaning. Just like having a gun that is fun to shoot is important, it is also important for that same firearm to be relatively easy to disassemble. If it is not, then one of two things will happen: You will not shoot it (or shoot it less often), or you will shoot it often without ever pausing to clean the gun, which is recipe for bad or disastrous results on the range. Disassembly of the Q4 was quick and easy—another reason this model is popular among men and women alike. Twenty minutes later and our gun was squeaky clean, ready to run again.

Overall, our experience with the Q4 SF was quite positive, and it surely drew attention at the range as the sun gleamed off its graphite grey steel frame. If you are in the market for a new gun for concealed carry, home defense or recreational target shooting pistol, the Walther Q4 Steel Frame deserves a serious look.

About the Author: Barb Melloni, an NRA Certified Instructor, is vice president of Renaissance Firearms Instruction based in Long Island, N.Y.

END_OF_DOCUMENT_TOKEN_TO_BE_REPLACED

News, thank the women of the NRA, Refuse To Be A Victim
END_OF_DOCUMENT_TOKEN_TO_BE_REPLACED