Who better to explain how shotgun chokes work than a wingshooting expert?

What is a shotgun choke? Well, it’s one of the reasons why shotguns are so versatile, allowing a single firearm to serve for home defense, target shooting and hunting. It’s a device fitted into your shotgun’s muzzle that serves very much like the nozzle at the end of a garden hose. To explain exactly how it works and what that means for you, Kirstie Pike, founder and CEO of Prois Hunting Apparel for Women, has a simple, plain-English explanation on a Mossberg blog post.

Before we get to the meat on this bird, though, the first thing to know is that your shotgun’s gauge is an important part of this conversation. Shotgun choke and shotgun gauge are not the same thing. If we go back to the (admittedly oversimplified) metaphor of a garden hose, then shotgun gauge would be the diameter of the hose. Shotgun gauges are sized in “reverse order,” meaning that the smaller the number before the gauge, the bigger the gun. Generally, the largest gauge is a 10 gauge, and the smallest is a .410-bore, if you want to get technical. For this article, we’re going to use the 12 gauge as our “baseline.”

The second thing to know is that pellet size and shotshell selection are also an important part of the equation. That alone could easily be another five articles, but here’s a thumbnail explanation. In general, when you're looking at shot size, the larger the number designation, the smaller the pellets will be. The material with which the pellets is made is also important; lead is heavier and delivers better terminal performance, but is not used in waterfowl hunting. You'll also find shotshell pellets in steel and other metals, such as tungsten. 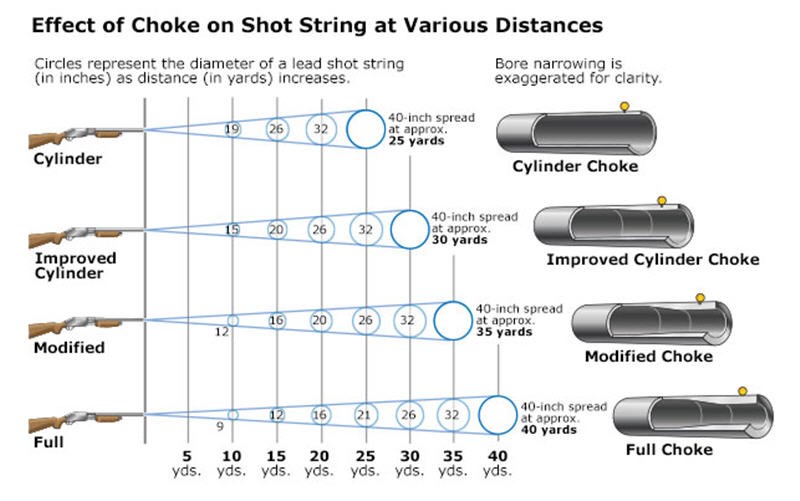 In this article by wingshooting expert Kirstie Pike, she explains that there are a few different chokes most commonly used by bird hunters. We’ll list them here from the tightest to the most open: “super full/turkey,” “full,” “improved cylinder” and “modified cylinder.” All of them are designed to constrict the shot as it leaves the muzzle so that the shot pattern travels further and in a tighter grouping than it would have from an unchoked (or “cylinder”) muzzle. Which one you’ll want to use depends mostly on what kind of hunting you intend to do.

That’s because your goal as a wingshooter is to put 70 percent of the shot pellets into a 30-inch circle. According to Pike, this is “the ideal kill zone to avoid wounding a bird but to also avoid over-kill meat damage. Choosing the proper choke will help you achieve the desired 70 percent shot delivery at the range you desire for the bird you are hunting.”

Getting that “golden ratio” of 70 percent of the shot into a 30-inch circle is where the choke comes in. For example, the “modified cylinder” choke only offers a modest shot constriction, so it gives us (roughly) a 32-inch spread at 25 yards. That’s best for smallish birds that you can expect to shoot at close-ish ranges, like quail. At the other end of the spectrum you’ll find the “super full/turkey” choke, which—as you can guess from the name—is ideal for taking wild turkeys at ranges well past 50 yards depending upon your shotshell selection.

Wingshooting season is heading for us like a flock of doves dive-bombing a sunflower field, so now’s the time to fine-tune your shotgun, choke and ammunition combo. Be sure to check out Pike’s full recommendations for each type of commonly hunted upland bird here—and we’ll see you in the field!

American Hunter | How to Talk About Hunting

NRA Family | The Moose That Saved My Life

END_OF_DOCUMENT_TOKEN_TO_BE_REPLACED

News, thank the women of the NRA, Refuse To Be A Victim
END_OF_DOCUMENT_TOKEN_TO_BE_REPLACED