How many times have you had to shoot your firearm at the target range or during a competition while others watched? Perhaps you have noticed others observing, interested in your performance. When this happens, it is difficult to keep your mind from wandering. I have fallen victim to this multiple times.

I, too, get curious about how an opponent is performing, or I get worried that someone I highly respect is watching and judging my performance. I may be frustrated with a previous performance and become overly critical of each shot. I might just be bored or thinking, “why can’t I do it like she just did?” None of this helps us to concentrate and focus on the job at hand. It only serves to hinder rather than enhance our performance. 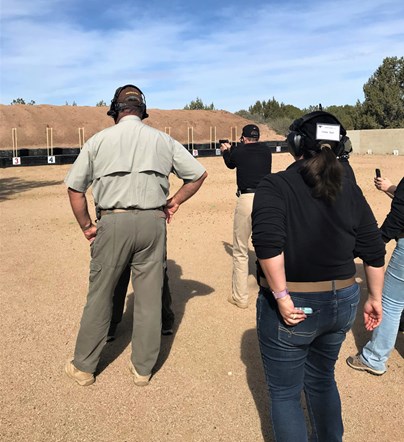 I’ve watched students become nervous when an instructor is near, causing them to start missing shots where they had just been making them. One suggestion or command by the instructor might disrupt their whole performance. I’ve watched competitors who had been performing very well, then miss one shot and never recover for the remainder of the match. I’ve seen people leave competitions in a huff, slamming their gear down and storming away. Having been trained in psychology, I can’t help but to be mildly amused at their dismay because not only have I done it to myself at some point, I know that we are our own worst enemies. Yes, we do it to ourselves.

If you are a weightlifter or football player, it may prove helpful to get ramped up, emotional, and get the blood going prior to pumping iron or before hitting the gridiron. Marksmanship and gun handling, on the other hand, require more fine motor movements and focus, which is contrary to emotional and physiological excitement. For consistent accuracy, preventing and managing emotions and excitement are just as or more important than shooting skills.

Serious competitors' formal training regimens often include self-calming skills, focus enhancement skills, and control of errant thoughts. Successful competitors don’t always formally practice these skills, but if you watch them carefully, you will see a visible change in their body and mind when it comes time to perform. Self-calming skills can include some form of meditation, bio-feedback, self-hypnosis, massage, breathing techniques, imagery and more. Focus enhancement skills can include mental rehearsal, step-by-step approaches, and thought blocking (stopping any thought that is not about the immediate task at hand). Control of errant thoughts is much easier with self-calming and focus enhancement, but may include compartmentalizing practice and cognitive reframing.

Compartmentalizing is a way to stop thoughts by directing them to our mental to-do list and away from our current conscious thought. An example may be, “I understand that I’m hot and itchy, but I will put that on the list to pay attention to after this competition.” The to-do list is then placed in a mental compartment that you can stow away until later.

Cognitive reframing may be the most important skill, as it can be used to prevent distractions in the first place. It can also be time consuming, as there are several steps involved. But wouldn’t it be great to not worry about what others think, what that “one bad shot” was about, or how the competition is going in the first place?

To explain cognitive reframing, we can use some ABCs. A (“Antecedent,” or the thing that happens first) will, in this example, be one “bad” shot during a competition. C (Consequence) in this example would be the anxiety and body tension that results. An interesting note is that A doesn’t cause C. B causes C. B is the beliefs and thoughts about A. In this example, thoughts could include “Oh, no! I just messed up!  I hope this doesn’t ruin my scores! I worked so hard for this competition and I just blew it!” It is no wonder that those thoughts would increase anxiety and tension.

But, if you were to change those thoughts to something more rational such as, “I always expect that there will be at least one shot that I will not be completely satisfied with. That means I need to use my calming and focusing skills to make sure that I maximize my efforts.” This replacement thought should lead to less anxiety and tension. This should be helpful in getting back on track instead of doing a death spiral with no chance of recovery.

Shooting relies as much—or more—on mental skills as it does on physical skills. If you want your shooting accuracy to improve, don’t leave out mental exercise. If you have tried practicing mental skills in the past and it did not work out well for you, get a coach who can help you define what does work for you. The mental skills practice is not always as fun as the actual pressing of the trigger, but you will be surprised at how it helps with shooting and other life activities.

END_OF_DOCUMENT_TOKEN_TO_BE_REPLACED

News, thank the women of the NRA, Refuse To Be A Victim
END_OF_DOCUMENT_TOKEN_TO_BE_REPLACED