Prone is the most stable shooting position, but there’s a right way and a bunch of wrong ways to do it.

Whether you’re plinking at targets or aiming at a game animal on a hunt, the best way to make the most accurate shot is to be as steady as possible. Multiple points of contact with a solid rest is the way to do that.  There’s no way to get more body-to-surface contact than by shooting prone—that is, lying on your stomach.

Lying most of your body on the ground stabilizes your entire shooting platform. You don’t need much (if any) gear to pull this off, but you do need to know how to get into position correctly. The farther you are shooting, the more important this becomes.

First, accept that prone is a little uncomfortable if you aren’t used to it. Depending on your body shape, you’ll probably be holding your head up at an angle which takes a bit of getting used to, but you’ll get accustomed to the feeling in no time. 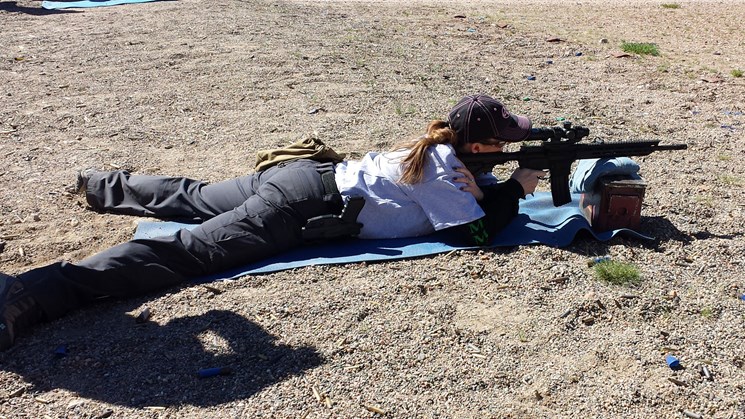 This shooter is using her off-side hand as her rear rest. Note the fingers splayed wide and wrapped around the upper arm, while the butt of the gun nestles in the web between her fingers and thumb.

Depending on the surface you’re lying on, a shooting pad can be handy, as it’ll provide a little bit of cushion between your body and the ground. A good one will have a lip or ridge you can use to load your bipod. You will also need a rest for the front of your rifle and for the rear. You can use your hand as the rear rest and a gun-mounted bipod, backpack, sandbag or fallen log can serve as the front rest. 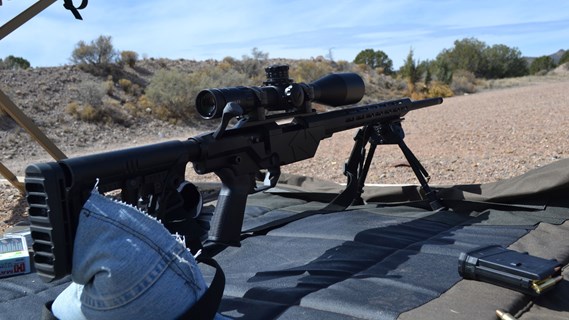 A sandbag can be used as a front or rear rest.

Set your rifle up on the ground using the front rest, pointing it downrange, and lie down behind it. Align your body so that the barrel of the gun follows the same line as your spine. Cocking your body to one side or the other might feel more comfortable at first, but keeping the gun in line with your backbone will provide maximum recoil absorption and help keep everything steady for follow-up shots. If you’re using a front rest that’s not a bipod, be sure it is nestled under the gun’s forearm, not the barrel.

Once you’re lined up behind the rifle, spread your legs out as far as is comfortable. The wider they are, the steadier you will be. Flatten your feet so they splay out sideways with your toes pointed out, not pointed into the ground. This gives you a little additional body contact with the ground. 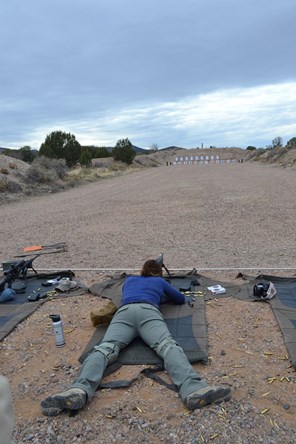 Snug the rifle to your shoulder as if to shoot. If you are using your hand as a rear rest, spread your non-dominant hand out wide and wrap your fingers around your upper bicep, placing your thumb pointing up along your shoulder. Nestle the buttstock of the gun on the webbing between your thumb and index finger and wiggle it all around until it feels comfortable and steady.

If you’re using a bipod that’s attached to your gun, shift your body weight forward slightly by inching up (not stretching to lean up or pressing your legs into the ground) so that you’re leaning a bit into the bipod, pressing it firmly forward and into the ground. This is called “loading the bipod,” and it’s important for stability. If you are at the range using a shooting mat that has a lip or a ridge, you can snug the feet of the bipod up against it to give it a little pushback, all the better.

Now, with your shot lined up in the scope, close your eyes. Take two deep breaths and open your eyes again. Are you still on target? If so, great—you’ve found your “natural point of aim,” and you’re ready to shoot. If you’re not on target after your deep breaths (and most of the time, you won’t be), move your body—not the gun—until you’re lined up again, remembering to load your bipod and relax your muscles. Repeat this process until you can close your eyes, take your deep breaths and still be on target afterward. Your natural point of aim is important, because it is the point at which your body is relaxed in the right position to shoot without putting excess tension on the gun. 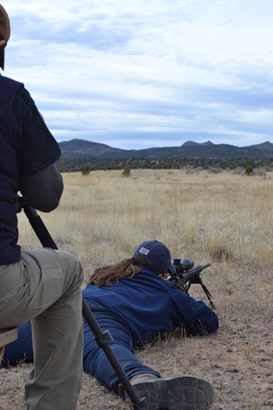 When you’re at your natural point of aim, you’re ready to shoot. It’s natural, especially if you are a hunter, to want to wrap your hand around the grip of the gun, but that adds torque to the rifle. Instead, rest your shooting-hand thumb along the side of the grip, pointed forward, parallel to the gun rather than wrapped around it. This exerts as little pressure as possible on the gun itself. If your gun has a pronounced pistol grip, this eliminates the option to wrap the thumb over the top of the gun.

What about pulling the trigger? Forget what you might have heard about taking a deep breath and firing as you exhale. That introduces additional movement into the shot, which is lousy for accuracy. Instead, you want to squeeze the trigger at your natural respiratory break, which means in between breaths. Don’t hold your breath in order to shoot—just wait until you’re naturally done exhaling and squeeze off your shot before your body starts to take the next breath on its own.

Continue to hold the trigger for a second after the gun has fired—this prevents you from “slapping the trigger” or coming off of it immediately after your squeeze, which could exert additional movement on the gun while the bullet is still traveling down the barrel. Keep your head on the stock and reacquire the target in your scope as quickly as you can. All of this adds up to a solid follow-through, which improves accuracy and gets more and more important the farther you are shooting.

NRA Family | How-To: Make Shooting Positions Work For You in the Field

END_OF_DOCUMENT_TOKEN_TO_BE_REPLACED

News, thank the women of the NRA, Refuse To Be A Victim
END_OF_DOCUMENT_TOKEN_TO_BE_REPLACED