Hornady’s Critical Defense Lite self-defense pistol ammunition is much more than a pretty pink polymer tip. It’s a way to take aim at two lethal threats: human attackers and breast cancer. The fact that it’s called “lite” refers not to its terminal performance (which happens to be tremendous, thank you very much), nor to its caloric content (although breast cancer does make us mad enough to spit bullets). Hornady’s Critical Defense is called “Lite” because it offers reduced recoil and reduced muzzle flash without sacrificing stopping power. 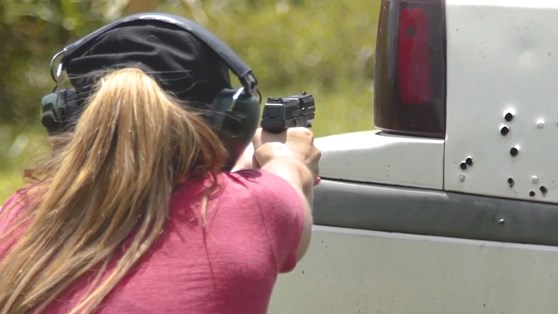 In this video, NRA Women contributor Kristy Titus demonstrates the message that is at the core of self-defense strategy: When you are one-on-one with someone bent on harming you, you must be able to rely on yourself. Hornady’s Critical Defense Lite was designed to open the path to self-reliance, especially for people with reduced hand strength or medical conditions.

But what about that pretty pink polymer tip? That’s there to allow maximum impact, even through thick clothing. It’s pink because Hornady donates a portion of the proceeds from sales to breast-cancer research—almost $40,000 last year alone!

Hornady assures us that they are moving Heaven and Earth to get as much Critical Defense Lite (among other popular loads) onto American shelves as possible. If you’re having a hard time finding it, here’s an article with our best advice to get some for yourself. Hornady.com

END_OF_DOCUMENT_TOKEN_TO_BE_REPLACED

News, thank the women of the NRA, Refuse To Be A Victim
END_OF_DOCUMENT_TOKEN_TO_BE_REPLACED