Why Shooting Is More Fun With Big Guns

Why Shooting Is More Fun With Big Guns

Why gaining weight, in this case, is a good thing.

If I had a dollar for every time a beginner student shied away from shooting one of my larger, heavier guns, I could quit working today. When I teach beginner classes at local ranges, I bring an assortment of handguns, from a .22 revolver up to a .357 Magnum (6” barrel). But I’ve noticed many of the female students shy away from the larger guns. Despite my pleas, these women don’t even want to try shooting one! They automatically assume that the smaller the gun, the easier and more pleasant it is to shoot.

But here’s the thing: It’s a myth that a large, heavy gun is more difficult to shoot. As a matter of fact, it’s often just the opposite. A dramatic increase in “kick” occurs when powerful cartridges intended for full-size guns are chambered in to lightweight, small, subcompact pistols. Why? Simply stated … recoil. 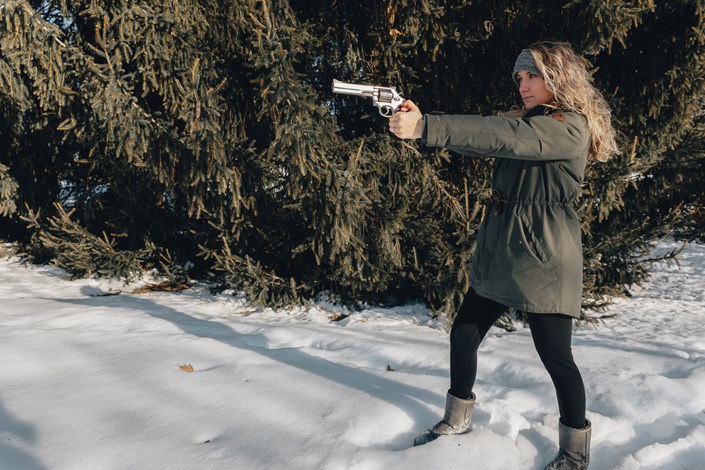 What is Recoil?
Recoil is the backward movement of a gun when it is fired. Every time you squeeze that trigger, it causes an explosion that results in the bullet zooming through the barrel and bursting out of the muzzle at a tremendous speed. When the bullet breaks free of the gun, the force of that action creates a flip of the muzzle as well as a backward thrust. The shooter then experiences this “felt recoil,” which many refer to as “kick.” Newton knew this back in 1687. For every action, there is an equal and opposite reaction. 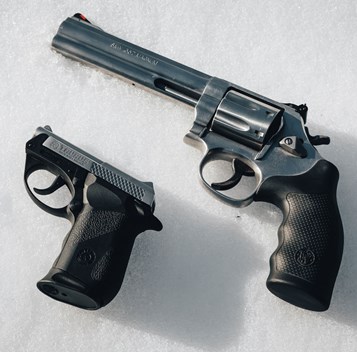 Recoil is determined by several factors: the material from which the gun is made, size and weight of the gun, and the size and energy of the ammo. The material of the firearm has everything to do with how it transfers the energy into the shooter's hands, as explained here by Robyn Sandoval, executive director, A Girl & A Gun Women’s Shooting League (AGAG). “For example, recoil in metal vs. polymer frames will feel differently to the shooter," she writes, as does the recoil assembly of the firearm. "Flat or round springs, spring weight, or single springs vs. stacked or combination springs all have different results.”

The difference in the effect of felt recoil extends to the various brands and calibers of ammo. “... even the brands, types of primer igniter, bullets and propellants all play a factor,” says Sandoval, noting that other factors such as compensated barrels will affect recoil.

5 Top Tips
Whether you’re just starting out shooting, or have already purchased a firearm that has too much recoil for you, follow these tips to learn how to manage recoil in handguns, rifles and shotguns.

1. Consider caliber. Whether it’s a rifle or handgun, a .22-cal. firearm loaded with .22 ammo will produce the least amount of recoil and muzzle flip. Once your target groupings improve (your cluster should be no larger than your fist), you’re ready to move up in caliber.

Regarding shotguns, Zach Snow, spokesperson for the National Shooting Sports Foundation, recommends opting for a semi-automatic 20 gauge. “A semi-automatic shotgun will take some of that recoil out for the beginner shooter,” says Snow. Semi-automatics have a gas operating system that reduces felt recoil by prolonging the action stroke.

As a first shotgun, a single-barrel .410-bore model is perfect for beginner shooters because it has the lightest felt recoil of all shotguns. My dad started my sister Carolyn on a .410 shotgun when she was just a kid, and when she passed away 11 years ago, my other sisters gave it to me. I shoot it to this day! The other gauges hurt my bum shoulder, so when I’m in the mood to shoot a shotgun, I grab her .410 and off to the range I go! Very little recoil, and tons of fun.

According to Sandoval, the most obvious influence on recoil is the size of the pistol, simply because the bullet exits a shorter barrel faster than a longer one. Because of the reduced distance, the pistol cycles sooner, often leading to stronger felt recoil. “The shorter barrel usually accompanies a smaller or lighter handgun, which has less mass to disperse the kinetic energy and causes more force into the shooter's hands and more muzzle rise upon firing," she says, which is why it is important for a shooter to invoke proper shooting fundamentals like grip and stance, which will help to mitigate the felt recoil.

If the purpose of the handgun is for concealed carry, size matters, particularly if she has a preferred method of carry that works best with her body type and wardrobe choices, explains Sandoval. “Proper gun fit will ensure that she can reach the controls without dramatically adjusting her grip in a potentially unsafe manner,” she writes, and the shooter should be able to absorb the transfer of the kinetic energy without hurting her hands. "Sharp edges that were not noticeable at the gun counter will reveal themselves quickly during recoil." For this reason, Sandoval recommends live-firing a gun before purchasing a particular model. Many ranges have rental programs for just this purpose, as do many AGAG events. "It is important that a woman selects a firearm that is comfortable for her hands and right for her needs and goals," she says.

For shotguns, some semi-automatic models have synthetic stocks, which can be lighter than other materials. “In that case, if you are experiencing uncomfortable recoil, consider adding some weight within the stock and forend,” suggests Snow. “If you need help with this, talk with an instructor or the manager at your local range or gun shop. You can also go see a gunsmith to have them add some weight to the gun while maintaining its balance.”

To give you some idea how much difference a heavier gun makes in terms of reducing recoil, check out this American Rifleman article in which the author tested various rifles (same manufacturer) chambered in .30-06. Four guns weighing 6, 7, 8, and 9 lbs. each were used, and results showed  recoil energies of 26, 23, 20 and 18 ft.-lbs., respectively.

4. Pick up the right ammo. All ammo, even of the same caliber, is not created equal! There are two main types of ammo: target and self-defense. Ammo used for target practice at the range will have the letters “FMJ” on it, which means full metal jacket. FMJ has less recoil than hollow points, or HP. Also check the grain number on the box—the higher the number of grains, the heavier the bullet, and in turn the greater the recoil.

4. Check your stance. Be sure to lean forward, putting more weight on either your left or right front leg, whichever feels more comfortable for you. Your feet should be spaced apart with one in front of the other. Leaning forward, with your knee slightly bent, will help absorb some of the recoil because you will have better balance. You don’t want your back in a backward arch leaning out over your heels. Think “nose over toes” for a very positive center of gravity.

6. Get a grip. When I was learning to shoot, I was blessed to have a variety of instructors. Some of them were military veterans, and others were retired police officers. They all taught me to grip a handgun very firmly, and make sure there is no space between my fingers, or between my hands when gripping the pistol.

For handguns, pick up the pistol behind the muzzle with your support hand. Then, with your strong hand, make a “Y” of your thumb and fingers. Place your strong hand on the firearm so that the web is centered along the high back of the back strap. This is the biggest mistake I see my students make. Their hand is too far down the back strap. Keep your finger straight and off the trigger.

You can also exercise with various types of fitness equipment to build up forearm and wrist strength. Squeeze a tennis ball or grippers in front of TV at night. Another tip is to do reverse curls, and to use rubber bands of different strengths to spread the fingers apart. Finally, reach for a small towel or cloth, and wet it under the faucet. Then use both hands to wring out the water. Repeat several times.

So never fear! When you hear, "Time to bring out the big guns," that means it's time to have some real fun.

About the Author: Maureen P. Sangiorgio is an NRA-Certified Firearm Instructor/Range Safety Officer.

END_OF_DOCUMENT_TOKEN_TO_BE_REPLACED

News, thank the women of the NRA, Refuse To Be A Victim
END_OF_DOCUMENT_TOKEN_TO_BE_REPLACED