At times a wide variety of guns to choose from can be a bit bewildering, especially if you're new to the shooting sports. Most folks who are just getting their feet wet tend to think of rifles and pistols as two distinctly different types of guns that shoot platform-specific calibers of ammunition. This is largely true since it's easy to find plenty of examples of rifles that shoot rifle cartridges and handguns that shoot handgun rounds at your local sporting goods store.

But gun designers are a creative bunch who are willing to mix and match calibers and action types to get the results their customers want. So along with typical rifles and pistols, you’ll find two other categories of guns that cross the rifle/pistol caliber divide. Pistol-caliber carbines, or PCCs for short, are long guns chambered to fire ammunition designed for handguns. You'll also find pistols that shoot rifle ammunition. Some of them look like traditional handguns, but for this conversation we'll focus on the models built around the same actions used for rifles. Where did these caliber crossovers come from, and what advantages do they offer? Keep reading to find out.

Definitions: Rifles vs. Pistols
Before we get into pistol-caliber carbines or rifle-action pistols, it’s helpful to understand some of the regulations that govern the shooting market here in the United States. Simply stated, the federal government enforces a strict set of guidelines regarding the measurable external features of a gun that are used to legally define it as a “rifle” or as a “pistol.”

Generally speaking, a rifle is a firearm with a shoulder stock that fires one projectile at a time through a rifled barrel (shotguns fire multiple projectiles through a smooth bore barrel). It must have a barrel that's at least 16" long, or longer, and an overall length greater than 26". If it has a shoulder stock and a barrel that's shorter than 16" it qualifies as a Short-Barrel Rifle (SBR) under the National Firearms Act of 1934 (NFA). Short-barrel rifles are restricted and require the same federal paperwork, background check and fees as a sound suppressor or a machine gun.

A pistol is a gun that fires one bullet at a time, through one or more barrels, with a grip designed to be held in one hand. A pistol is allowed to have a short barrel as long as the bore is rifled and the gun has a hand-held grip. If someone wants to attach a shoulder stock to a handgun, it must first be registered with the government as an SBR, just like a rifle with a too-short barrel. 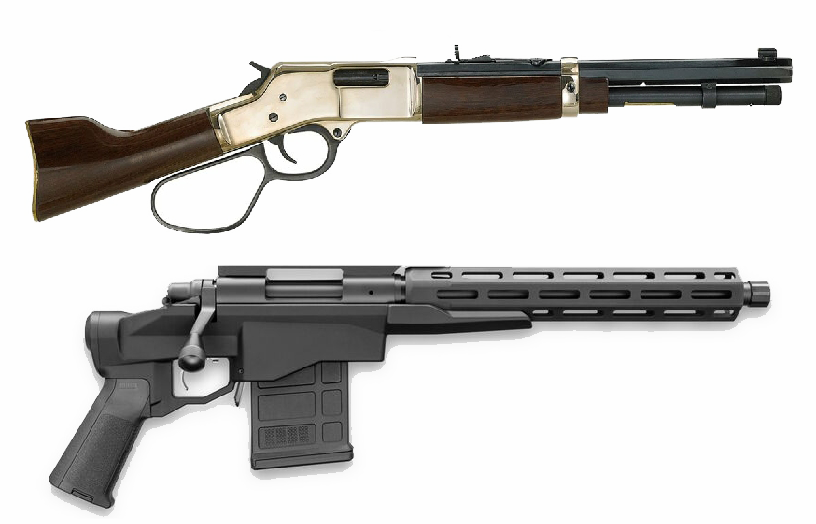 The Henry Mare's Leg (top) and Remington 700CP are pistols that use rifle actions.

Legally speaking, where a gun fits on the rifle/handgun spectrum boils down to shoulder stocks and barrel lengths, not the type of action used or the cartridge fired. The key is how the gun is configured at the factory. A handgun action can be used to build a rifle if it’s assembled at the factory as a rifle with a 16"+ barrel and a shoulder stock. And a rifle action (bolt, break, lever, or semi-automatic) can be made into a pistol with a barrel shorter than 16” if it has a pistol grip instead of a shoulder stock.

Pistol-Caliber Carbines
A pistol-caliber carbine is a relatively compact and lightweight class of rifle designed to fire the same ammunition as a handgun. A classic example of this cartridge crossover is the lever-action carbines that fired the same ammunition as the single-action revolvers carried by cowboys and pioneers as they settled the western states of America. At that time, ammunition was expensive, difficult to obtain and a heavy burden to carry in a saddle bag. Being able to feed a revolver and a lever gun out of the same box of cartridges saved money and conserved cargo space. Today you can still find modern replicas of these cowboy guns chambered for revolver cartridges including .357 Mag., .44 Mag. and .45 Colt.

The Henry Big Boy Steel lever-action carbine (top) and the Ruger Blackhawk single-action revolver are both available chambered in revolver cartridges including .357 Mag., .44 Mag. and .45 Colt.

Over the last few years we've seen the rise in popularity of modern semi-automatic pistol-caliber carbines chambered for 9 mm pistol ammunition. Just as in the old days, these carbines can be loaded with the same ammunition as several popular models of defensive pistols. In some cases, they have the added advantage of using the same magazines as the pistol. This magazine compatibility can save money, storage space and simplify your equipment set.

The Ruger PC Carbine (top) and the company's Security 9 pistol are both chambered in 9 mm and can use the same magazines.

Pistol-caliber carbines are enjoyable guns to shoot because they provide the handling characteristics and features of a rifle with low levels of felt recoil. A carbine extends the effective range and accuracy of the handgun ammunition, which is usually 7 to 25 yards when fired from a pistol. A carbine’s effective range with the same load can be between 50 to 100 yards. But these carbines can't compete with the power levels and effective range of rifles chambered for rifle cartridges. If you need to hit targets or harvest game out to 200 yards or more, then a rifle-cartridge-powered long gun is the way to go.

Rifle-Action Pistols
The guns that influenced today's rifle-action pistol designs were born out of the necessity and limited resources common to war time situations. What do soldiers do if they need a gun that's more powerful than a pistol but more compact than a standard issue rifle? They get creative and make modifications, like shortening the barrel or cutting off the shoulder stock. The result is a rifle or sub-machine that's easier to carry or that fits more comfortably inside confined spaces.

Inland Manufacturing offers historically accurate replicas of the World War II-era M1 Carbine and a pistol version called the M1 Advisor, both of which fire the .30 Carbine rifle cartridge.

These trimmed-down military rifles had the advantages of being more compact while using the same standard-issue magazines, ammunition and support gear (slings, magazine pouches, cleaning kits) that the soldiers already had on hand. And for those soldiers who were already trained to use the standard size rifles, there was little training needed to run the more compact versions.

Today's commercially manufactured rifle-action pistols offer many of the same advantages as their military predecessors. Even though I'm a fan of this type of pistol, I'm willing to admit that they are something of an acquired taste. Rifle-action pistols are longer, heavier and more awkward to work with than typical handguns. Firing rifle cartridges through short pistol length barrels can produce impressive levels of noise, recoil and muzzle flash, while reducing the cartridge’s effective range and performance. That said, rifle-action pistols usually outperform pistol-caliber pistols and do so at longer distances.

Kel-Tec offers a lightweight .223 Rem. gas-piston operated platform that is available in a rifle configuration, called the SU16, or as a pistol called the PLR-16. Both versions use AR-15 magazines.

The Do-It-All AR-15
If you look back over the photos of the various carbines and pistols shown above, the differences in their sizes and features are fairly obvious. However, one of the most popular semi-automatic platforms in the country, the AR-15, is one that can be a source of some confusion for those who are unfamiliar with the differences between pistol-caliber carbines and rifle-action pistols. 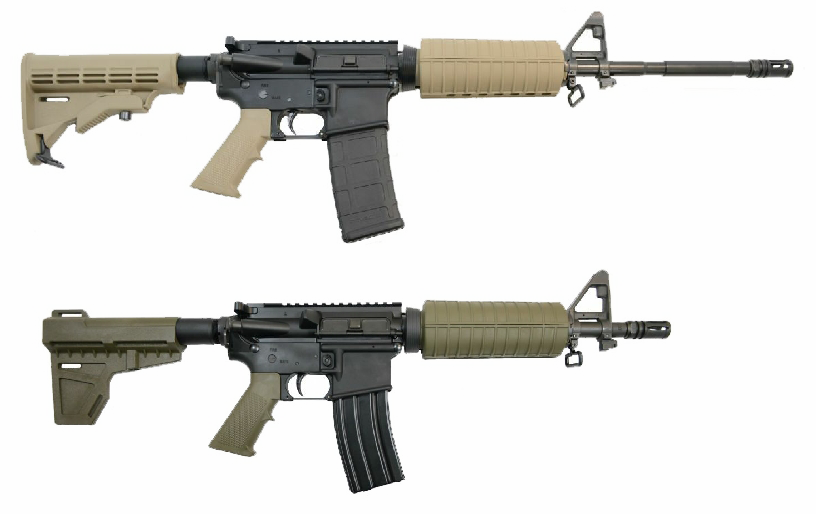 The AR-15 has a flexible, modular design that allows it to be configured at the factory in several different ways. Do you want your AR-15 to be a rifle-caliber rifle, a rifle-caliber carbine, a pistol-caliber carbine, a rifle-caliber pistol or a pistol-caliber pistol? All five of these guns can be built around an AR-15 lower receiver. The advantage of this flexibility to the shooting sports enthusiast is that the trigger pull, controls, grip shape and magazine swap-out procedure remains the same even though the barrel lengths and calibers vary. If you learn how to operate one AR-15, then you’re ready to run almost all of them. 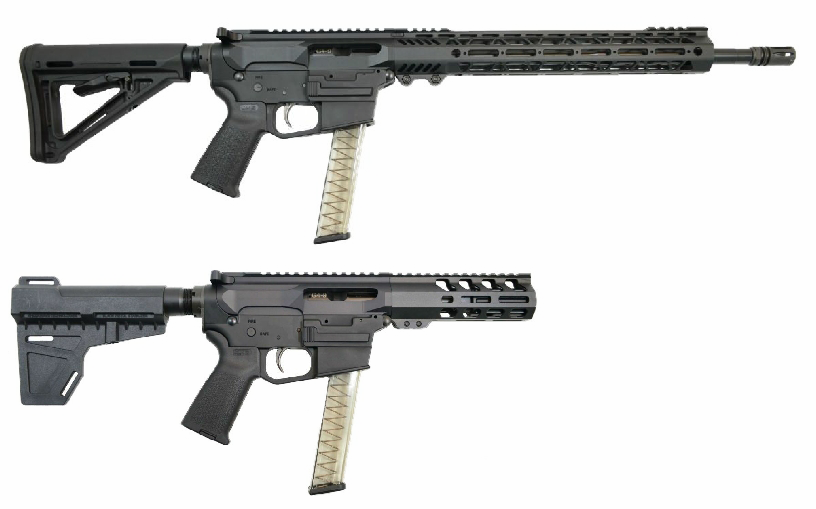 Palmetto State Armory's Gen4-9 series of AR-15 carbines and pistols are chambered for 9 mm ammunition and use Glock pistol magazines.

AR-15 pattern rifles and pistol-caliber carbines are distinguished by their 16" or longer barrels and the shoulder stocks attached to their buffer tube assemblies. An AR-15 pistol has a shorter barrel between 4" to 12" in length without a shoulder stock attached to the buffer tube. An AR pistol's tube can be bare, wrapped in a foam sleeve or outfitted with a stabilizing wrist brace. Because the upper half of an AR-15 can be separated from the lower half, make sure to keep track of which you attach to what. Keep rifle uppers attached to rifle lowers and pistol uppers attached to pistol lowers so as to avoid unintentionally assembling a regulated short-barrel rifle.

A Word to the Wise
Just one more quick reminder about NFA regulations. It may seem tempting to tinker with pistol-caliber carbines or rifle-caliber pistols at home, especially when the gun in question uses easy to swap modular components. It's important to remember that mechanically altering a handgun to make it more like a rifle, or a rifle to make it more like a handgun, will land you in hot water with the federal government. If you want a rifle, then you should buy (or build) a rifle. If you want a handgun, then do the same. If you want to convert a gun you own into a Short Barrel Rifle, then verify that owning an SBR is legal in the state where you reside and complete the ATF registration process before making any modifications.

How to Field-Strip an AR-15

How to Safely Walk With an Unholstered Handgun

END_OF_DOCUMENT_TOKEN_TO_BE_REPLACED

Lots of people can be a good NRA Firearms Instructor. Here’s how to be a great one!

8 Simple Ways to Stay Comfortable on a Backcountry Hunt

These eight tips should get you thinking about what you’ll really need on your next backcountry adventure.

If you want the best of bucks come fall, start pre-season planning now!

Is It OK to Switch Up Your Carry Gun?

Some people change their concealed carry gun multiple times a week. But is that a good idea?

Learn how to simplify your concealed-carry choices in this latest video from Smith & Wesson's GUNSMARTS series.

Loading pistol or rifle magazines can be cumbersome, so follow these tips to make sure your process is as efficient as possible.

END_OF_DOCUMENT_TOKEN_TO_BE_REPLACED

NRA Blog | The Winnebago County Sheriff's Office, Going Above and Beyond

News, thank the women of the NRA, Refuse To Be A Victim
END_OF_DOCUMENT_TOKEN_TO_BE_REPLACED