Empowering: An Interview with Heidi Smith of Thunder Ranch

Empowering: An Interview with Heidi Smith of Thunder Ranch

The author talks one-on-one with Heidi about her personal experiences with firearms and her long-held commitment to empowering women.

“Our primary concern is that people who come to Thunder Ranch leave with a peace of mind in their heart and head. We strongly hope that they never have to use any of the skills or things learned here for the defense of themselves or their family, but if they do, we want this knowledge to be used confidently and with great vigor. The only goal is to win.”
—Heidi Smith, President, Thunder Ranch 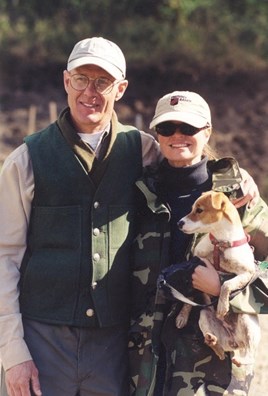 Accomplished shooter, firearms trainer, EMT, reserve Sheriff’s deputy and medic, Heidi Smith brings a long and diverse resume to the arena of self-protection, and that’s even before mentioning that she is the president of Thunder Ranch, a premier destination for training with firearms and learning how to survive, and win, a worst-case violent encounter. Last year, I had the opportunity to visit Thunder Ranch in Oregon, and spend time with founders Clint and Heidi Smith, shooting, talking, and wholeheartedly coming to appreciate the history, mission and community that has grown out of one of the country’s oldest and best recognized gun schools. I also had the chance to talk one-on-one with Heidi about her personal experiences with firearms and her long-held commitment to empowering women, and I couldn’t wait to share her story and insights with the audience of NRA Women. 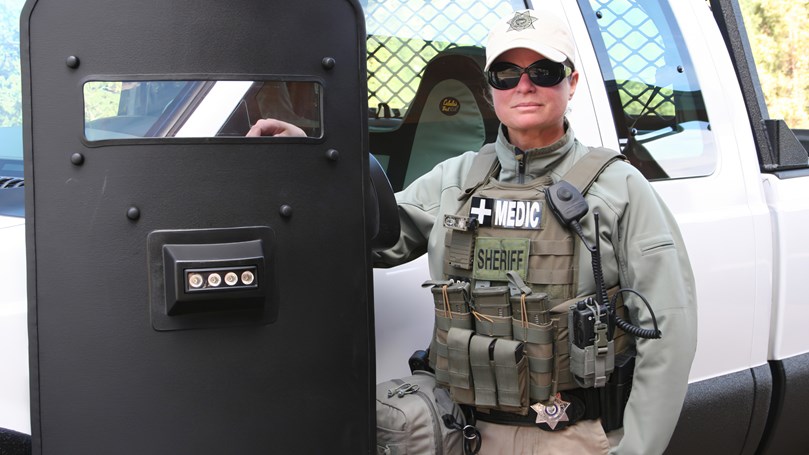 Q: What was your first experience with a firearm?

A: That would’ve been in my junior year of high school, Friday Harbor, San Juan Island in Washington state. My P.E. coach taught us how to shoot skeet, shotgun. It was 1984, and I was 17.

Actually, that was my second real experience with a gun. My first was when I was 14. My uncle was taking a firearms class in Issaquah, Wash. My grandmother and I were very close and I was spending the weekend with her, and she says, “Your uncle is taking some gun class, we should go and see him on his lunch break.” So, we went, and I was a little intimidated because I was 14 and I hadn’t been around guns or anything. While we were there, my uncle told me he’d like me to meet the instructor. I went up, I shook his hand, and he said, “Young lady, would you like to shoot a machine gun?” And I said yes—his name was Clint Smith, and that was my very first experience with firearms.

Q: How did you get into firearms training?

A: My mom took me to my very first class in Sun Valley, Idaho, in July of 1989, and it was a class with Clint. It was my first pistol class and my uncle loaned me a 1911, a Colt. I remember I was bleeding so bad after three days because, you know, in those days the guns just cut you to pieces. But I took my first three-day handgun course and, so, it was my mom that really introduced me to firearms training.

Then, my mom and I saw a real need in the industry for female-only classes, just to get women in the door. So, we started Personal Safety Institute in 1990 and got certified as state instructors for Oregon and Washington, and we taught all-ladies classes on the West Coast, we were the first ones besides Paxton Quigley. We did that for eight years. It was great. We had about 35 different firearms, from a Ruger .22 to a bolt-gun in .308 and a Remington 870 shotgun because we wanted to cover the kinds of guns that might be found in the students’ homes, and that maybe they were leery of, so we could take the mystery of them. We’d give them the opportunity to shoot wheel guns and Glocks and 1911s so that when they went to a gun store they’d know, “That’s the one I shot in class, that’s the one I liked.” We wanted to give them tools to understand how to use guns to make their homes safer, and how to actually go out and purchase one. 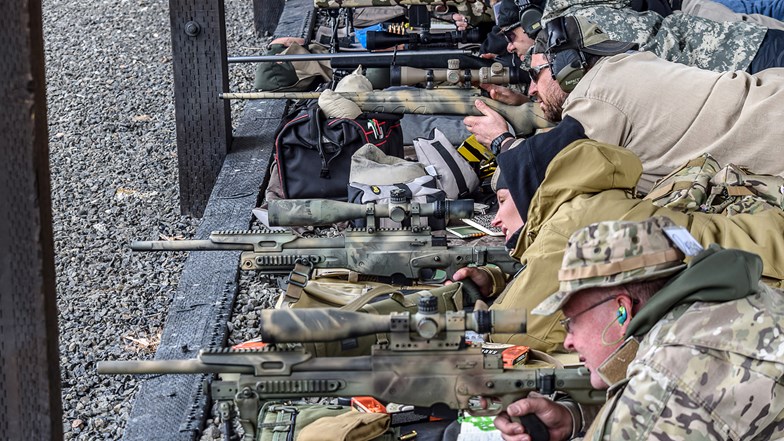 Q: You and the Thunder Ranch team train a lot of students each year, shooters of all skill levels. If you had one piece of advice for new shooters, what would it be?

A: Find a range where you can rent different guns. You need to be able to put your hands on them and shoot them. How does it feel? Can I manage the recoil? Guns don’t have to be comfortable, but they have to be workable, and you have to be able to shoot them well. So, find ranges that will rent guns, or if you have friends with different guns, ask them to take you to the range. If you are going to buy a new gun, you should find a way to try it first, I think that is the smartest thing people can do.

Q: Women represent, and have represented for some time now, the fastest-growing segment of the American gun-owning population. Have you also seen a rise in the number of women participating in firearms training?

A: I have. We are getting more lady shooters, and we are getting more women interested in the rifle—in shooting carbines and taking our Urban Rifle class. I think the industry is doing a great job of building products for smaller-statured people, and especially ladies. The industry has embraced this, and that’s motivated women even more. And there are great programs all over the country that are getting women excited about learning to protect themselves and defend their families. Remember, women have the ability to make life, and take it, and that makes them pretty powerful. And, I have to say the entertainment industry, despite all of the shortcomings of Hollywood, has been influential in helping women to feel powerful, and I think that’s a positive thing. Women are warriors, and I want them to find that side of themselves.

Remember, women have the ability to make life, and take it, and that makes them pretty powerful.

Q: Do you have a salient piece of advice for women, as it relates to firearms, training, or gear? 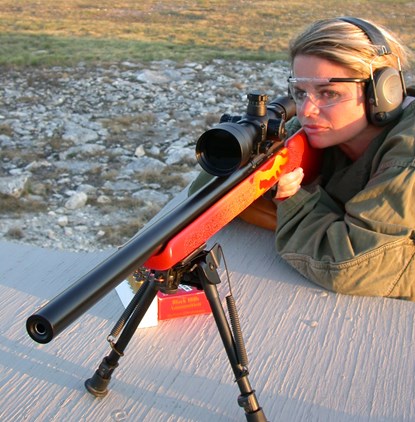 A: Yes, particularly for those who practice or are considering concealed carry. Drop the notion of “concealed carry” and think of it as “fighting carry.” Don’t think just about how comfortable your gear is, or how good it looks or how low-profile it is—you’re not thinking of the worst-case scenario. If you are carrying in the most comfortable and concealable way, ask yourself if you would be able to draw your gun with someone on your back or if someone was trying to take your purse. Imagine your worst possible scenario, then build your gear, build your gun, build your holster, build your fighting platform around that. You’ll have to dress around the gun and probably change the way you do things, but you’ll be prepared for that worst-case scenario.

Q: American Rifleman’s “Ladies Pistol Projects,” designed and conducted by NRA Women Editor-in-Chief Ann Smith, has accumulated a lot of data regarding the features and characteristics women prefer in personal-defense firearms. When it comes to chambering, the .380 ACP cartridge has been a favorite. Coming from a background of shooting larger, more powerful chamberings, what are your thoughts on the .380?

A: Yeah, personally I would recommend taking a step up to the 9 mm, there is a lot of data about its use as a defense load, but I will say all ammunition has gotten a lot better in recent years. My biggest concern with the .380 is that people go to it because the guns are small and low-profile—there again, the consideration is on comfort and concealability, not on building a fighting platform. I’m not going to throw the .380 out, I would 100 percent rather have them carry something rather than nothing at all. If you have a .380 and you’re reading this, remember, what wins fights is in your heart and your head. You fight. But also practice, practice really well, and just understand that, as with anything, there are limitations.

Q: What is the mistake you most commonly see shooters make? And what is the correction?

A: When people practice, regardless of the platform—rifle, pistol, shotgun—people want to “gopher,” they pick their heads up or move their eyes off the sights. When we are at the range, we put holes in cardboard, or we shoot steel and it swings or makes a loud noise, and people take their eyes off the sights like, “How’d I do?” They’re looking for those holes, and they’re not focusing on that front sight. In a fight, we’re not going to see holes. Put a T-shirt over the cardboard target, you’re not going to see holes. And that can be a solution: Save some of your old T-shirts and put them over the targets at the range. Focus on the front sight and pressing the trigger to the best of your ability for every roundthat you shoot, and don’t look for where you hit, trust your sights.

Q: What is your favorite class to teach at Thunder Ranch?

Q: Finally, what is your favorite firearm?

A: That’s easy, it’d be my GAP (G.A. Precision) rifle in .308, because I love long-range shooting. It’s bank vault tight, I’ve had it 13 years, and I’d bet my life on it. I just really like it, it’s a great rifle. It’s the first gun in all the time that I’ve been with Clint that I ever said, “I want one.” I mean, I’m easy when it comes to guns, I can use whatever, but when I shot his GAP, I knew I wanted one, and I got it for Christmas that year.

The author would like to thank Heidi, Clint and the entire Thunder Ranch team for their friendship, hospitality and commitment to empowering armed citizens.

NRA Women | Who is the Female Firearm Owner?

END_OF_DOCUMENT_TOKEN_TO_BE_REPLACED

News, thank the women of the NRA, Refuse To Be A Victim
END_OF_DOCUMENT_TOKEN_TO_BE_REPLACED