Olympian. Gold Medalist. Athlete. Hero. At age 19, Virginia “Ginny” Thrasher earned the first gold medal of the 2016 Olympics in Women’s 10-meter air rifle. Overnight she became an international sensation, her newfound fame and success changing her life forever. While many know her name and picture, few know the inspirational story of a talented and dynamic young woman who never planned to be a star.

Ginny traces her shooting beginnings to a Pennsylvania deer hunt with her grandfather when she was in the 8th grade. Growing up in northern Virginia, Ginny recalls shooting targets a few times and being taught gun safety early on by her father. She didn’t shoot BB guns or plink in the backyard—most shooting was in preparation for hunts she would go on with her father, two older brothers and grandfather. That first hunt was not a fantastic experience for her. “Sometimes it can be a little bit boring and a little cold and 8th grade me wasn’t really into all that,” Ginny admitted. “The most exciting part was pulling the trigger.”

That moment of self-discovery led her to explore her high school’s varsity 3-position air rifle team the following year, attending an open training. “Most kids on their first day—they’re there for an hour, maybe an hour and a half, and then they leave and they figure out whether they like it or not, and I just remember after three hours my mom dragging me off the range.” 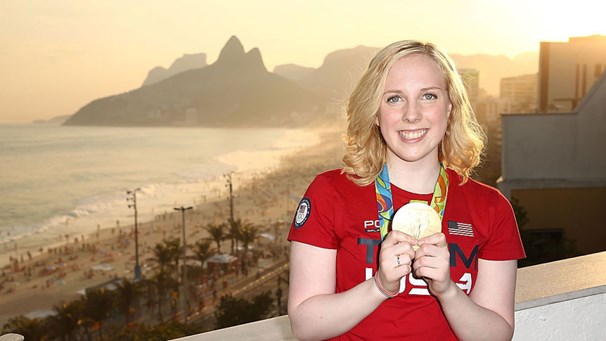 Ginny Thrasher flashes her Gold medal she earned in Women's 10m Air Rifle at the 2016 Olympics in Brazil.

Predictably, she joined the team and by her sophomore year had also signed on to a travel team, the Acorns Junior Rifle Club. She started shooting smallbore, traveling and practicing more. Eager to learn, Ginny used every opportunity she could to learn and practice, attending Civilian Marskmanship Program and NRA camps in the summer along with clinics put on by West Virginia University (WVU). The same year, she made the Junior Olympics, a prestigious match for which one has to qualify, in her very first attempt. As a junior she began to consider her options after graduation, knowing in her heart that she wanted to—and needed to—continue competing.

“I definitely wasn’t the top recruit in my class by any means,” says Ginny, “but I wanted to go to WVU, which was the best school … I made sure I did everything I could to be a good candidate for that, so that was keeping my grades up and practicing more and going to a lot of matches … being very coachable and enthusiastic … .”

Her hard work and dedication paid off. Ginny signed with West Virginia University at the beginning of her senior year of high school and made the National team the same year. Time management was key to Ginny’s success, as well as supportive parents who made it possible. “I was really fortunate that my parents saw how interested I was and decided to go all in with me. I got all my own equipment in high school … they got the equipment that I needed, when I needed it.” Ginny also figure skated while managing a heavy course load of advanced placement classes. 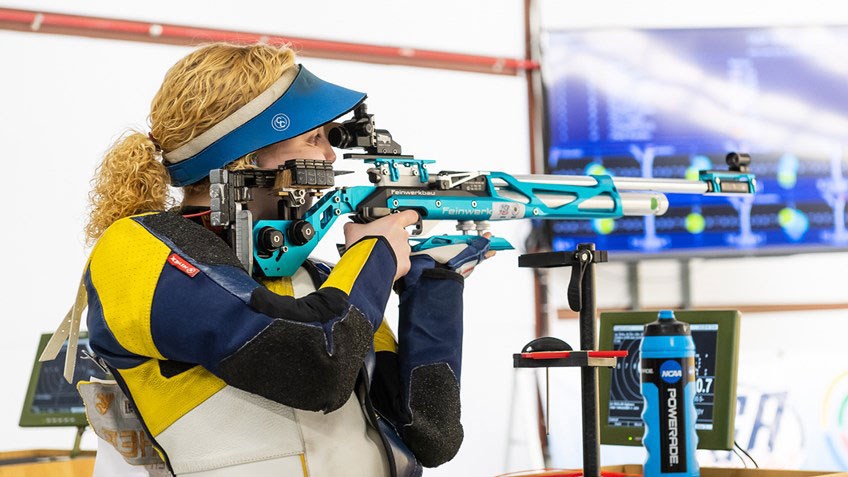 “To do that, and to be the best in the world at something, you have to prioritize and make sacrifices,” she said. “I can remember not going to the Friday night footballgames because that was a training day for me. I can remember actually not going to my senior prom, because I had a competition.” At that time, Ginny never imagined she would be the best in the world. She did not grow up dreaming of Olympic medals, but instead just wanted to find her potential, to see what she could accomplish.

She attended her first world cup selection match and qualified to shoot her first world cup by the end of her senior year of high school. She started college soon after, majoring in biomedical engineering while traveling to NCAA competitions for WVU and international competitions for the United States. Overwhelmed at first, Ginny remembers being a “wide-eyed freshman,” taking everything in and looking up to the strong senior team at WVU. In the 2016 NCAA championships, she was selected to represent her school as a freshman.

Ginny laughingly recalls the scene, being so young and standing 5’1” between her teammates, four 6-feet-tall senior boys. They not only won the team championship, but Ginny claimed first place in Individual Championships in smallbore and air rifle, becoming the youngest person to ever do so.

Still reeling from her recent win, Ginny and a few of her teammates then took a few days off school to attend the smallbore Olympic trials. It wasn’t until the second day that she realized that she could be an Olympian—having taken a significant lead that won her the entire qualifier, and a spot on the Olympic team. One week later she was whisked away from school yet again to shoot a world cup and Olympic test event in Brazil. Spring and summer of 2016 found her in a different country nearly every two weeks, training and preparing for something she never imagined she would be a part of. The United States had earned two spots, one in women’s air rifle and one in women’s smallbore, in the years leading up to the Olympics, allowing both Ginny and her teammate Sarah Scherer to shoot in both events.

In the same process as the NCAA finals, the top eight athletes in the event competed in a knockout final. To her joy and disbelief, Ginny claimed the gold medal for Women’s 10-meter Air Rifle, the very first event of the 2016 Olympics, though she had qualified in smallbore. Heads spinning, cameras flashing, Ginny found herself rushed from the range to the podium on an 11-hour media tour.

“You’re getting drug tested, you can’t sleep, you’re just being pulled in so many different directions. And I kind of lost my mindset a little bit, I lost my bubble a little bit,” she remembers. Four short days later, Ginny came one point short of making the smallbore finals. Pushing through the heartbreak, she did her best to look at what she learned from the experience and from a situation few ever experience. “Nobody prepares you for the reality of winning a medal in your first event and then having to compete again. Because for most people, even for most Olympians, that’s not reality.” 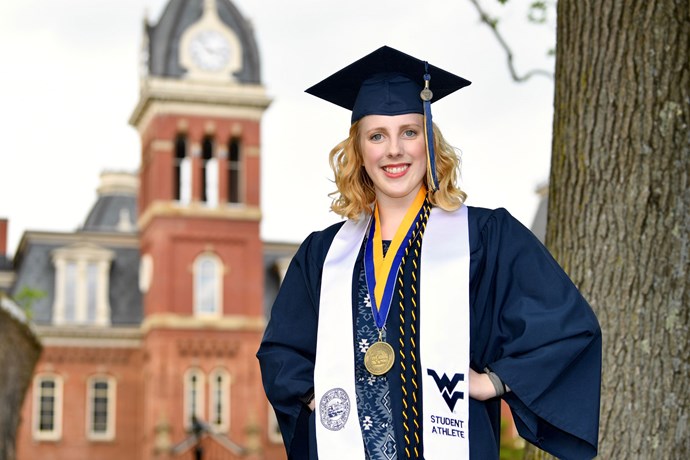 Ginny hasn’t stopped. She graduated summa cum laude from West Virginia University with a degree in biomedical engineering in 2019, earning awards and setting records along the way, and now lives at the Olympic Training Center in Colorado Springs, Colorado. There she prepares for the 2021 Olympics in Tokyo, Japan­—originally scheduled for 2020 but delayed one-year due to the worldwide Covid pandemic. Ginny has so much to offer, not only as an athlete but as a person. She is someone who set out not to be the best but to do the best she can and help others up along the way. She dedicates herself to her sport and to her country, and even in the most agonizing circumstances looks to improve for the future.

Amazingly, in addition to her current lead in the smallbore U.S. Olympic trials, Ginny has other thriving projects. She has invented and patented a kneeling roll for smallbore, mentors national junior team members, and has even given a TEDx talk, viewable on ginnythrasher.com.

END_OF_DOCUMENT_TOKEN_TO_BE_REPLACED

News, thank the women of the NRA, Refuse To Be A Victim
END_OF_DOCUMENT_TOKEN_TO_BE_REPLACED