How to Safely Load & Unload Your Guns

How to Safely Load & Unload Your Guns

New to guns and shooting? Competitive shooter Becky Yackley walks you through the first steps for rifles, shotguns and handguns.

If you’re new to guns and shooting, one of the first surprises you’ll get is that although it’s easy to load and unload your gun, doing so safely is a challenge that relies both on your focused attention and on your muscle memory. The process for doing so is different for the three major kinds of firearms—rifles, shotguns and handguns—and just to make things more interesting, it’s also different for the various types of “actions.” Winchester pro shooter, outdoor writer and NRA Woman Becky Yackley was once a beginner, too, and she has some excellent step-by-step advice for you courtesy of her blog hosted on Winchester.com … but before you read it, you should start here.

The first thing you’ll need to know is the NRA’s Three Rules of Gun Safety: ALWAYS keep the gun pointed in a safe direction; ALWAYS keep your finger off the trigger until you are on target and ready to fire; and ALWAYS keep your gun unloaded until you’re ready to use it. These rules are simple in principle, but in practice they can be a bit more complex, and they all factor into the safe handling of rifles, shotguns and handguns.

The Safe Direction
For example, when we say you must keep your muzzle pointed in a “safe direction,” we’re generally referring to the backstop of a range, although that could also include a bullet trap or earthen backstop. The main point is that if a bullet were to exit your muzzle right at that moment it would not impact anything you’re not prepared to see destroyed. (You can read more about how that works here.) Keeping the gun pointed in a safe direction is simple with long guns such as rifles and shotguns, but as Yackley points out, “It is very easy to turn a handgun while you are manipulating it. You never want to let the handgun point at any part of your body or someone next to you on the range.” Handguns have a much smaller barrel, so a tiny one-degree tilt in the carrel will translate to several degrees downrange.

Finger Off the Trigger
Keeping your finger off the trigger until you’re on target and ready to fire also sounds like a no-brainer, doesn’t it? Well, yes and no. As Yackley states, “It’s very easy as a new firearm owner to be unaware of your trigger finger. Practice always manipulating your handgun with your finger outside the trigger guard. Preferably, lay it alongside the frame.”

Part of the reason why it’s so simple to accidentally let that finger nestle into the trigger guard is that guns are designed to be intuitive to shoot—putting your finger there is supposed to feel natural. Furthermore, you’re definitely working against a lifetime of very poor modeling of this practice in popular media … movies and TV shows are famous for depicting unsafe gun handling, and fingers on triggers are the most commonly filmed gun-safety no-nos. 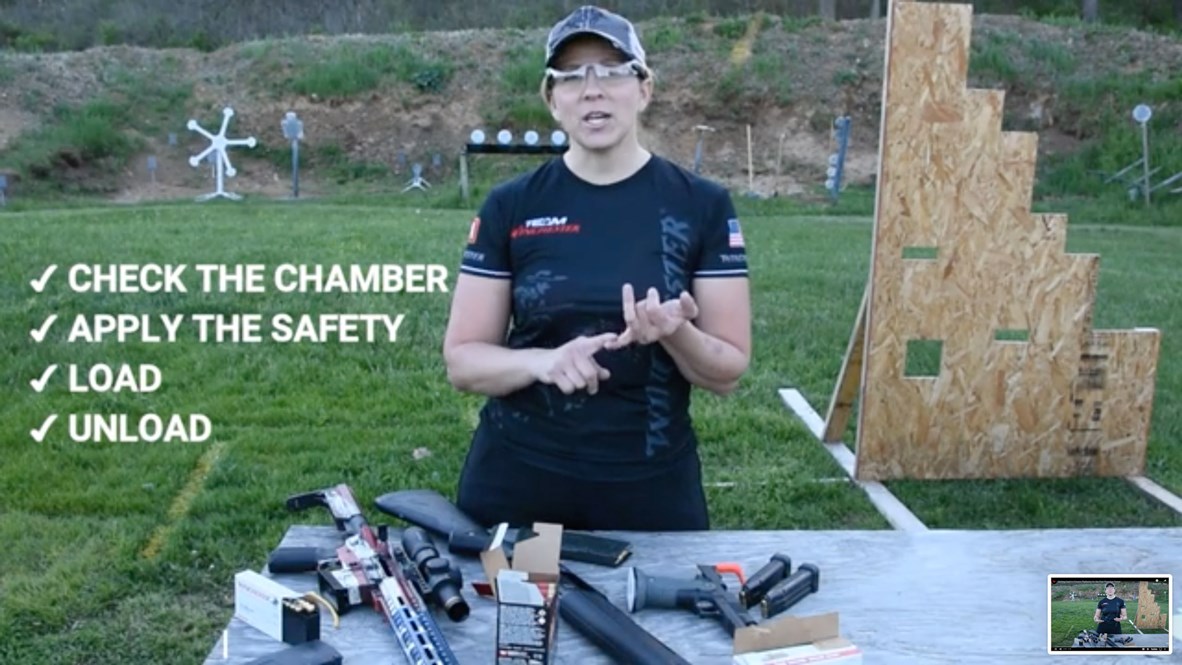 Keeping the Gun Unloaded
The idea of “keeping the gun unloaded until it is ready to use” is one of the blessedly few times we gun owners must engage in doublethink—the practice of keeping two contradictory statements in mind at the same time with no apparent dissonance. That’s because one of the first principles of gun handling is that “all guns are always loaded,” and that’s why you have to keep them pointed in a safe direction, with your index finger well away from th bang-switch.

However, we frequently need to make sure that our always-loaded gun is unloaded. We should do this any time we pick it up or put it down, or hand it to another person—in fact, for a good chuckle, spend some time watching a gun-store clerk passing a gun back and forth with a customer. You’ll get to see the chamber of that (always loaded) gun checked and verified to be unloaded about a dozen times every five minutes.

What About the Safety?
Another point of interest: Have you noticed that nowhere in the Three Rules does it say anything about the manual safety on any given gun? That’s because not all guns have manual safeties, and furthermore, because manual safeties are mechanical devices that can fail. For those reasons, we should not rely on the safety to keep us actually safe. That said, it’s definitely an extra layer of protection … and one you should be very familiar with.

Now that you’re caught up on the “first principles” of safe gun handling, we recommend checking out Becky’s blog to get the low-down on how to put them into practice with rifles, shotguns and handguns…there’s even a cool video to help you visualize how it all works together. Click here to learn more!

In this article
NRA Rules of Gun Safety, Firearm Safety, Becky Yackley, Tips & Tactics, How To

American Hunter | Journal This Year: How to Record Recent Adventures and Plan Upcoming Ones

NRA Women | 6 Tips to Get More Comfortable With Carrying Concealed

NRA Women | Range Etiquette—What You Should Know Before You Go!

NRA Women | Outside the Lines: Shooting on the Move

END_OF_DOCUMENT_TOKEN_TO_BE_REPLACED

News, thank the women of the NRA, Refuse To Be A Victim
END_OF_DOCUMENT_TOKEN_TO_BE_REPLACED