The author shares her story of managing a chronic health condition while taking on the rigors of competitive shooting and hunting.

Exhausted. Tear-stained. My first night in the hospital for Diabetic Ketoacidosis was a seemingly constant stream of blood draws. I came to accept the pinch of the needles, something I’ve feared my entire life, resigning myself to the fact that it was my new reality, and that each new prick could hardly be worse than the one before. At the age of 20, during finals week of my second year of college, I was diagnosed with Type 1 diabetes (T1D) and was in Diabetic Ketoacidosis (DKA), a life-threatening complication of high blood sugar.

I was terrified and blamed myself. It took a while for me to understand that there is no one to blame. I did not do anything to cause it. Type 1 diabetes is not dependent on lifestyle choices, what foods you eat or how much you exercise. The only treatment is insulin, by either periodic manual injections or through a pump, which constantly supplies insulin to the body. I had previously made the common mistake of confusing Type 1 with Type 2 diabetes, which can be brought on by inactivity or excess body weight. Type 2 diabetes can be controlled and only requires supplementary insulin in more advanced cases.

A few days after I was released from the ICU, I started shooting High Power Rifle matches again. I compete in High Power service rifle, shooting an AR-15 at 200, 300 and 600 yards from the standing, sitting and prone positions. Attempting to get back into the sport that I love, I quickly learned that my life was never going to be the same. I tired extremely easily those first few matches. I had to ask others for help marking and scoring targets in the pits because I was too weak. Even as I regained the muscle I had lost from DKA, I had new challenges to face. I started experiencing sugar lows where I start shaking, my brain stops working, and I can slip into a coma. It is immediately dangerous. On the other end of the spectrum, high blood sugar is less dangerous in the short term, but can cause blindness over time. Over the past year, I have learned an incredible amount about my disease and how it affects my ability to perform on the range and function in the outdoors. 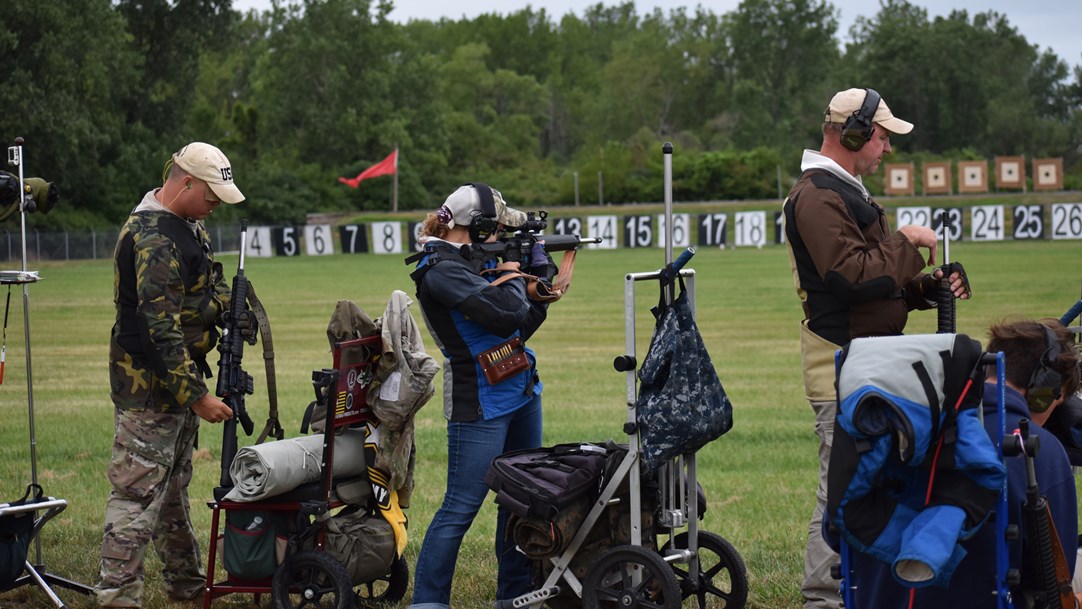 Standing is the most challenging shooting position, and it is critical to keep blood sugar normal or elevated to shoot well.

For the majority of last year, I used old-fashioned testing strips and insulin pen needles. Insulin in vial form has to be refrigerated; insulin pens do not. However, I quickly discovered that I needed to wrap my insulin in fabric and pack it away from the ice packs in my cooler to keep it functional but not frozen. Shooting in the hot sun, especially while wearing a heavy shooting coat, not only causes low blood sugar, but also inactivates insulin and test strips.

While it was important to have on hand, I found that I seldom needed insulin during summer competitions. Instead, I consumed far more sugar than I normally would before a match to keep from violently shaking during the standing stage. The physical activity combined with the mental stress of shooting and heat caused my sugar levels to plummet. Juice boxes bring my sugar up quickly, while starchier carbohydrates like wheat bread or fattier snacks like dark chocolate keep my sugar steadier over time. I have also learned to pack far more food than I think I will need.  I hate that I have to rely on a balance of insulin and carbs for survival, and I must admit there have been times I have resisted bringing my supplies. I went for a hike with my boyfriend in March and hardly made it through. Halfway up a large hill, I could hardly walk. My shaky hands struggled to open the small tube of glucose tablets I had brought with me, but before the end of the hike, I had run out. I learned a valuable lesson—T1D is unpredictable. There is no way to predict exactly how my body will react on any given day and it is always better to be over prepared. 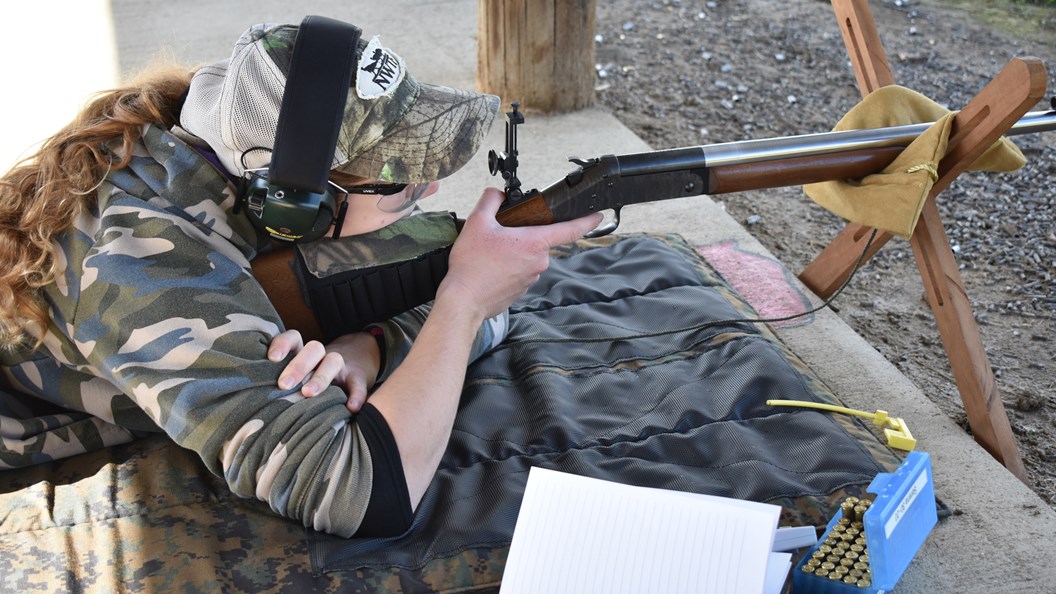 Hunting introduces entirely new challenges. I use insulin injections rather than the pump, which attaches to the body and injects insulin in smaller doses more frequently. I made the decision to utilize insulin pens because the primary location for a pump is on the stomach, and I did not want to have something in the way while shooting prone. To give an injection while hunting in an Ohio winter, I have to keep my insulin from freezing and inject my stomach under layers of clothes. The greatest challenge is staying quiet while doing this, opening snacks and monitoring sugar. To any active T1D, I highly recommend a continuous glucose monitor (CGM). It has made an incredible difference in my life and has made it possible for me live as normally as possible. I use a small, low-profile device that attaches to my stomach but does not disrupt prone shooting. It reads my blood sugar every five minutes and sends the readings to my phone. I can see if I am trending up or down before it gets dangerous. (I do have to be sure to turn off the high and low alarms before heading out into the woods.) 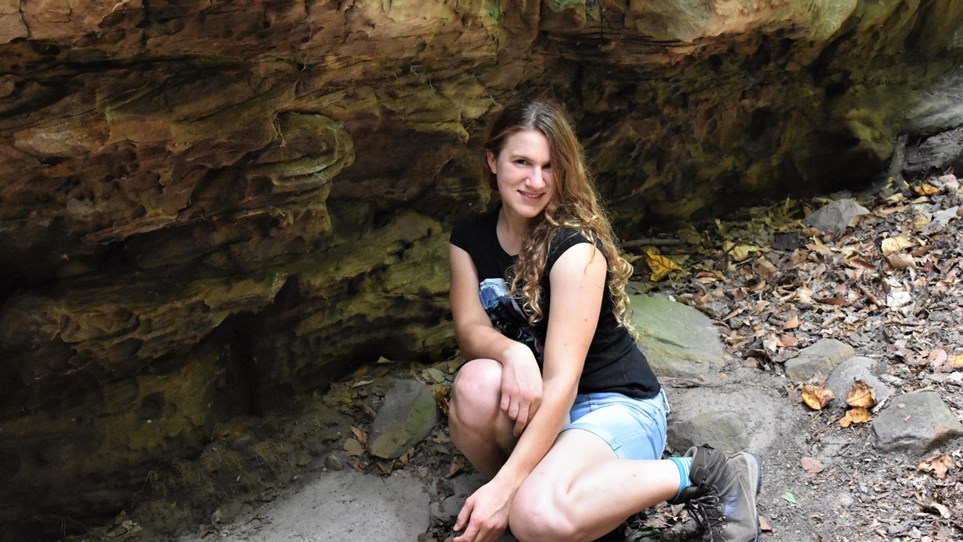 Every outdoor activity requires some extra planning with T1D. Always bring extra supplies and have a way to contact someone in an emergency.

More than 1 million Americans live with T1D. However, most type 1 diabetics are diagnosed at an early age, in childhood. Being diagnosed at age 20 abruptly changed my life. Everyone’s body is different and no one has the same experiences. The fear and frustration I initially experienced fueled my desire to not let T1D dictate how I live my life. After several of the worst shooting scores I’ve ever received, I placed 10th out of 666 non-distinguished competitors in the 2019 National Trophy Rifle Individual match and third out of 91 women in the National P100/NTI/NTT match aggregate. The more I learn about my body and its response to T1D, the easier it is to manage. When I started shooting competitively in 2015, I had set a goal to earn the Distinguished Rifleman’s Badge before I turned 21. I earned it in October of 2019, armed with a cooler of juice boxes. Even with all I went through, and without a CGM at the time, I was able to earn the highest civilian honor for marksmanship recognized by the U.S. government.

I hope that I can help inspire others with disabilities, especially those diagnosed with T1D as an adult, to find what works for them and follow their dreams. It used to frustrate me when people told me to “just take a pill” for my diabetes. Now I understand that they were only trying to help and didn’t understand the true challenges T1D can bring. Do not be afraid to explain this misunderstood disease to others. Also, if you know someone with T1D, understand that there is no limit to what he or she can do, it just might take some extra planning and a little more sugar.

About the Author: Serena Juchnowski is a freelance outdoor writer, photographer and High Power Rifle competitor from Richfield, Ohio. She earned the Distinguished Rifleman's Badge in 2019, the highest honor for marksmanship recognized by the U.S. government and is starting into Palma with hopes of making the U.S. Young Eagles Team. Her passions lie in introducing people to the outdoors, especially juniors and women, and sharing stories that inspire and educate. You can contact her at serenajuchnowski.com.

END_OF_DOCUMENT_TOKEN_TO_BE_REPLACED

These hunts are vastly different, yet offer so much perspective to a new hunter for the wild world we live in.

Not just "high lady," this career first for Lena Miculek shows that women in professional shooting sports can win it all.

END_OF_DOCUMENT_TOKEN_TO_BE_REPLACED

News, thank the women of the NRA, Refuse To Be A Victim
END_OF_DOCUMENT_TOKEN_TO_BE_REPLACED