When it comes to optics for shooting, it's one of the most important questions you didn't know to ask.

As first-time hunters and shooters start assembling their gear list, there’s no shortage of learning to be done. Potentially no more so than in regards to sporting optics: riflescopes, binoculars, spotting scopes and rangefinders, etc. As soon as you decide it’s time to mount a riflescope on your long gun, questions will abound. Key among them is a question you may not have known to ask: Do you want your scope to be first focal plane or second focal plane?

The simple answer, of course, is to select the configuration that a mentor you may have has recommended, since they’re presumably going to be helping get you sorted. Using the gear that a trusted mentor is comfortable with training you on isn’t a bad idea. But if you want to know just what these two terms mean—and what one or the other means for your future optics purchase—read on. 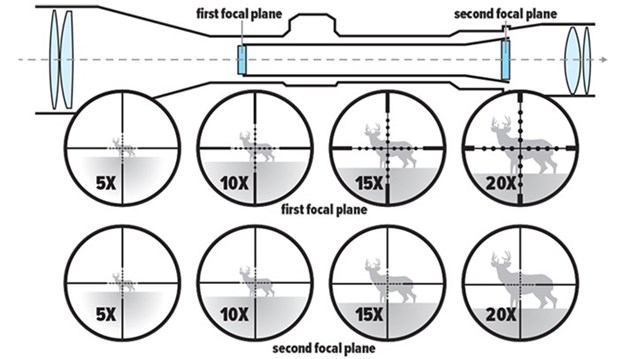 First vs. Second Focal Plane
In every riflescope there are two locations where a reticle (the point of aim you see when you look through your scope) can be installed. One of those locations is in front of the “erector system” (the tube inside of the scope that controls its magnification), while the other is behind it.

If a scope’s reticle is placed in front of the erector system (so closer to the “front” of the scope, or the objective lens), then you’ll have a scope that’s known as First Focal Plane, or Front Focal Plane (FFP). The two names are interchangeable and mean the same thing.

If a scope’s reticle is placed behind the erector system (so closer to the “rear” of the scope, or the ocular lens that you look through when aiming), then you have a Second Focal Plane (also known as a Rear Focal Plane) optic. Again, the two names here mean the same thing.

Since the First Focal Plane is in front of the erector system and the Second Focal Plane is behind it, how your reticle looks as you change your scope’s magnification will be radically different. As you adjust the magnification power selector on your scope, you’ll either magnify or de-magnify the image you’re seeing, causing it to either shrink or grow.

That’s the difference from a purely technical standpoint. That said, there are pros and cons to each setup—and they can dictate which scope is the best choice for your intended use. 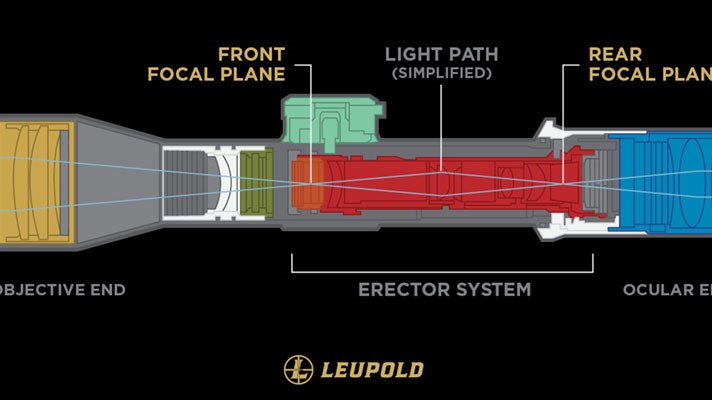 First Focal Plane
First Focal Plane riflescopes are primarily used for long-range shooting. Because the reticle in a First Focal Plane scope will magnify accordingly with your image, any hold lines (common in scopes built for tactical purposes or long-range shooting) that are in it will be accurate throughout your entire magnification range. Whether you’re on 3-power or 18-power, your reticle maintains all of its values. The perk here is that it allows you to use those holdovers—and trust them—at any given point in your magnification. The downside is that at lower magnifications, like the aforementioned 3-power, your reticle will be very difficult to see. It will grow as you increase magnification.

Second Focal Plane
Second Focal Plane scopes are primarily used when hunting. As the reticle on a Second Focal Plane scope always stays the same size, any hold points in your reticle will only be true on one magnification—usually always your maximum power. If you’re on a lesser magnification, you’ll have to do some math in your head, which isn’t easy to do when seconds count. What you lose in versatility, however, you gain in visibility: Because the reticle remains the same size throughout your adjustments, it is large enough to see even on a low setting like 3-power.

What Should I Use?
The focal plane that’s best for you depends entirely on what you’re going to be doing with your rifle. If you’re a new hunter and just trying to put meat in the freezer, stick with a tried-and-true Second Focal Plane scope. You presumably won’t be taking many (if any) shots where you need to “hold” for elevation or windage, and the larger reticle will make it easier for you to know you’re on target—at all magnifications.

If target shooting or long-range steel is more what you’re considering, don’t hesitate to look into a First Focal Plane reticle and invest some of your time into studying the more popular tactical reticles and their respective pros and cons. First Focal Plane optics are almost exclusively what long-range competitive shooters are using, and for good reason.

As ever, selecting a focal plane is all about selecting the right tool for the job at hand.

END_OF_DOCUMENT_TOKEN_TO_BE_REPLACED

News, thank the women of the NRA, Refuse To Be A Victim
END_OF_DOCUMENT_TOKEN_TO_BE_REPLACED