If there were any doubts about the character that defines the hunting community as a whole, just read more about their generosity through this charitable organization.

Hunters are often stereotyped as stern, silent and unforgiving. They can sit completely still for hours in a cold deer stand, hike through a pitch-black forest with their gear on their backs and practice at the range unrelentingly to take down the perfect buck. However, their hard work usually pays off and when it does … they don’t mind sharing!

If you know a hunter, you’ve probably been offered unsolicited deer meat. Most hunters, out of respect for the animal, and to feed their families, aim to consume all of the meat from their game. The desire to feed our families nutritious, healthy food is something most of us can relate to, and this is where hunters have the advantage. Farm-to-table eating is a recent fad, but hunters have always taken special pride in their field-to-table methods. Venison, for example, is low in fat and high in protein, which makes it an ideal organic dinner option.

As a huge jalapeño deer jerky fan, I get excited every fall the first time my family fires up the smoker. Although my family is active only during the typical fall/early winter hunting season, many live in areas where year-round deer hunting is allowed with special crop-protection permits. The laws on this vary by state, so be sure to check with your state’s DNR or other governing institution before you engage in off-season deer harvesting. However often they take to the field, many regular hunters and seasonal shooters have the desire to share the wealth when it comes to their abundant seasonal harvest. However, if your family’s freezers are full, there is another option.

It’s hard to believe, but tens of millions of people in the United States struggle with hunger. However, many households with limited access to food do not qualify for federal nutrition programs and rely on local charitable organizations for hunger relief. Sadly, most food banks and church pantries find meat one of the least-donated food items, as it is expensive and perishable. 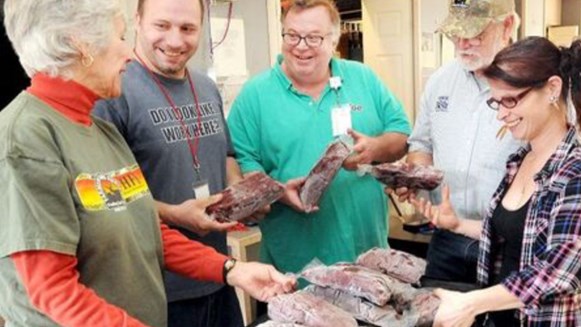 This is where Farmers and Hunters Feeding the Hungry (FHFH) comes in. The organization was founded after FHFH president, Rick Wilson, was driving to a barbecue in Virginia. He pulled over to help a woman who had stopped on the side of the road. She showed him a dead buck that she was struggling to get into her trunk. Wilson asked if she was sure she wanted to take it without calling the police or wildlife services, as she would risk getting a ticket for transporting an untagged deer. Her response—that she didn’t care if she got a ticket because her children were hungry and she needed the meat—changed Rick Wilson’s life.

The sight of a struggling single mother collecting 100 pounds of roadkill just to feed her family struck Wilson. After he helped load the buck into her trunk, he began fundraising for what would become FHFH.

Today, FHFH works by covering the meat processing fees for farmers and hunters willing to donate deer, elk or livestock to the hungry. All they have to do is contact participating butchers in their area, and the meat will be processed for free and then delivered to church pantries, food banks and the Salvation Army.

With the recent rise in unemployment from COVID-19,  it is now more important than ever to shorten the steadily growing food bank lines. Some lucky FHFH chapters have received local grants during this trying time that have allowed them to expand their accepted meat to include poultry in an effort to meet higher demands.

There are a lot of misconceptions about hunters (see 4 Myths About Hunting), but if you do the research it is clear that hunting is conservation. Hunters provide both financial and ecological benefits to American wildlife. However, hunters aren't content to stop at protecting Earth’s creatures; they are compelled to positively impact people too.

In this article
Farmers and Hunters Feeding the Hungry, Ashley Thess, Hunting

NRA Family | How Far is Too Far to Shoot?

END_OF_DOCUMENT_TOKEN_TO_BE_REPLACED

News, thank the women of the NRA, Refuse To Be A Victim
END_OF_DOCUMENT_TOKEN_TO_BE_REPLACED