If you have been struggling with shooting due to small hands, check out these helpful tips.

Teresa Laudenslager of Macungie, Pennsylvania, was all of 8 years old when she watched her dad supervise the BB-gun range for the 1973 Boy Scout Jamboree. “I wanted to shoot that BB gun in the worst way,” says Laudenslager. “When the Jamboree was over, my dad purchased two Daisy rifle BB guns for my sister and me. I really enjoyed shooting that rifle, and so began my love of guns.”

Her dad was a marksman and taught her well. Before long, she had rifle shooting mastered. As an adult, Laudenslager stopped growing at 4’6” tall and didn’t pick up a handgun until the age of 50. “I had been consistently hitting bullseyes with rifles for many years, so when I started shooting handguns, I found them difficult to shoot accurately,” she said. “I really struggle getting my small hands around the grip of most handguns. With a rifle, I feel confident that I will always hit my mark. I don’t have the same confidence with a pistol.” 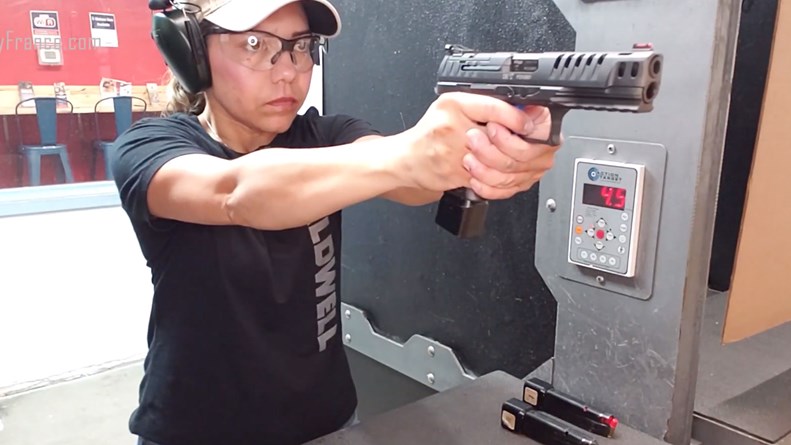 When you hold a handgun, your trigger finger should have a nice curve, and the pad at the tip of your finger should rest on the trigger. You can tell if the gun is too big because your trigger finger will be straight alongside the frame in order to reach the trigger. “If you are touching the frame of the pistol with your trigger finger, it means that your finger is fully stretched, which prevents you from moving it comfortably and smoothly,” says Olympic shooter and Second Amendment ambassador Gabby Franco. If you have been struggling with shooting due to small hands, check out these tips:

Consider the compacts. Many of my petite students do better when shooting a compact or subcompact handgun rather than a large or full-size frame. They visited indoor ranges and rented several pistols until they found one that felt best in their hands.

Just keep in mind that the smaller the gun, the snappier it could be, so do the research on how much each gun weighs, and choose the heaviest. This is also a good tip to keep in mind if you’re ready to move up from a compact to a full-frame firearm. "There is a correlation between the weight of a gun and recoil perception," says Franco, also Walther Arms Brand Ambassador. “In other words, you will feel less recoil when you shoot a heavier gun. Thus, a reliable—and heavy—gun like the Walther Q5 Match Steel Frame may be a good option for home defense, target practice and competition.” 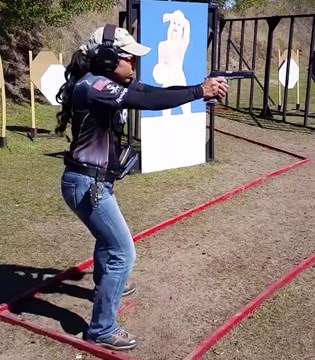 Consult a gunsmith. Once you’ve purchased the pistol, ask a gunsmith for his or her alteration suggestions. Franco has received many helpful gun modifications for small hands from reputable gunsmiths. For example, “a gunsmith stippled the frame of a polymer pistol to reduce and improve the grip," she said. "Another gunsmith also removed material from my 2011 pistol (shown), such as under the trigger guard and grip panels, to help me reach the trigger with ease.” An expert gunsmith might be able to help you too.

Reach for a revolver. Revolvers are a terrific option for shooters with small hands because they are very easy to load and operate. You do not have to rack a slide; instead, you just load, aim and shoot. Look for models that have a cushioned, rubber grip, such as the Ruger GP-100. “I have shot revolvers and found that they work better for small hands,” says Laudenslager.

Check out the kids’ section. “I really enjoy shooting youth rifles,” says Laudenslager. “They are not as expensive as an adult rifle, and I’m very accurate at the range. I also only buy a lever or bolt-action gun, because my arms are too short to use a pump action rifle.”

Dry practice daily. “I dry fire almost daily to make sure I grip the pistol in the same way every single time,” says Franco. “People with average or large hands can draw their guns with a lousy grip and pull the trigger without a problem. I would not be able to reach the trigger if I made such a mistake. As you can see, small errors I make might result in adverse consequences. Thus, dry firing helps me build good habits to improve my shooting skills.”

Work on grip strength. For most petite shooters, having small hands means that they cannot firmly wrap around the pistol as much as others with average-size hands. You can compensate for this by boosting grip strength. Work out with a grip exercise tool, squeeze a tennis ball or do reverse curls. I found my grip strength increased when I put away my gardening tools and went back to pulling weeds by hand!

Change your mindset. Eliminate your perceived limitations. “It’s important to note that having small hands will not prevent you from shooting different sizes of handguns and having fun,” notes Franco. “I always get surprised about how small I am in pictures with other people. You see, being petite is not something I think about continually. Being small only means that you might have to do things differently, train differently, or perhaps even train harder. In any case, it only means that you will continually learn and develop new skills.”

END_OF_DOCUMENT_TOKEN_TO_BE_REPLACED

News, thank the women of the NRA, Refuse To Be A Victim
END_OF_DOCUMENT_TOKEN_TO_BE_REPLACED