Breaking outdoors with my husband and dog on a wild turkey dinner quest bonds us to the natural world.

For outdoorswomen, there is no better medicine for the spirit than heading outdoors, particularly during the COVID-19 crisis. Hunting inherently follows social distancing protocols, so spring turkey season is the ideal way to experience that sense of connection to and awareness of the fact we are a part of—not apart from—nature. And how much better can it get when your husband and dog get into the act for the ultimate family affair? To top it off, I was also trying out the new Azyre women’s hunting clothing line, which, as it turns out, offers function as well as fashion.

My husband, Phil, and I hunt Merriam’s turkeys every year on our Colorado property. While I usually pack a bow, I was working extra hours on writing projects and had only one weekend to hunt. “I’m the NRA,” so I grabbed a trusty Winchester 12 gauge and a call as Phil and I headed out to try and call in a bird. Our impatient one-year-old jagt terrier, Bella, stayed behind since her part wouldn’t come until a bird was bagged, at which point her nose would be put to the test. 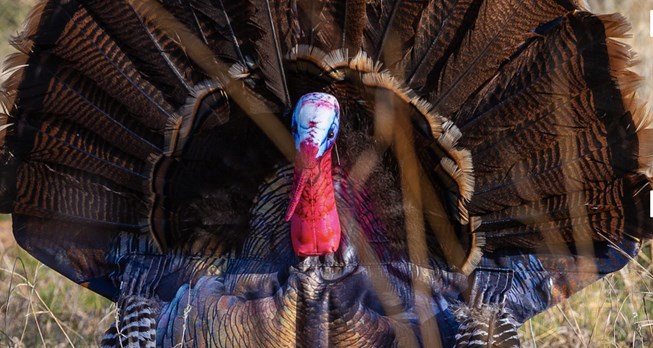 We got a late start as we scrambled through the brush on a few setups. Just when we thought we might have a bird in hand, it became obvious the only gobbler sounding off to our calls and giving away his location was on a neighboring property, beyond our irrigation-canal boundary.

Before we headed back to the house, I took a moment to give thanks for my surroundings, breathing in the fresh air while looking across lush alfalfa fields at pinyon juniper canyons and snow-capped mountains. I felt exhilarated despite our defeat, and any lingering disappointment vanished as Bella greeted us, tail wagging, toy in mouth. I tossed the toy for her, then pulled some moose burger from the freezer—not exactly a consolation prize, because I like it even better than elk. Still, I had my heart set one using one of Jim Zumbo’s famed turkey-nugget recipes, as Jim is as renowned for his wild-game cooking as he is his writing.

My dad always said, “To get game, you’ve got to get into the game,” so we were out earlier the next morning. We walked along the edge of the alfalfa field only about 450 yards from the house, close to the canal where gobblers sometimes strut early, and then again in mid-morning this time of year, once hens are back on their nests. This time we pulled a few tricks from our bag … four Montana Decoy turkey decoys—a strutting tom and three hens. Our staged scene looked pretty good. At least I’d think so if I were a turkey.

Phil was the caller for the day. With decoys placed, he worked his magic, and ... nothing. Then suddenly a hen came busting toward us along the canal. She saw the strutting gobbler decoy and slammed on the brakes. Likely not wanting to be pestered by a tom, she turned and split. Turkeys are skittish. There went our live decoy. 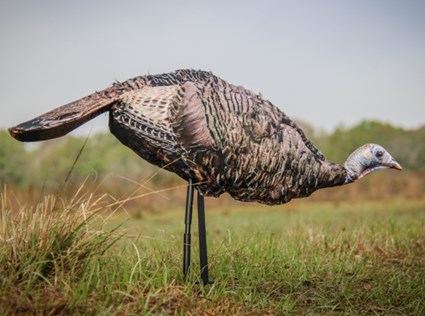 Phil called some more. He was sitting maybe 15 feet behind me, motionless and watching. Still not a peep of a response. Phil went silent too. When turkey hunting, sometimes silence—and patience—is golden, as is the ability to remain still. Not 10 minutes later, moving only my eyes, I caught a flash of movement 90 degrees to the right. But it wasn’t a bird. It was two birds, marching quickly toward the decoys along the field’s edge, using the same route we’d taken to set up. The lead bird was dominant. His showy red wattles seemed more vivid than any red wattles I’d ever seen against the bright green backdrop of the field. Making a beeline for the gobbler decoy, neither bird looked my way. Staying motionless, shotgun already positioned on my knee with my finger set to nudge off the safety, I knew this was my lucky day.

The “bang” sent the lead bird to the ground as the other spun and turned away, trotting and never looking back. Phil and I stood up and hugged each other and then walked to the beautifully iridescent-colored bird. Merriam’s turkeys, in particular, stand out when you consider the four U.S. subspecies as their tail feathers are tipped in a lighter, buff color. It was time to get Bella.

Immerse yourself in the outdoor experience. It will cleanse your soul and make you a better person.”

Watching young Bella hunt was almost as exciting as being the hunter. She walked with us from the house but then got excited as we hit the field. She followed the exact trail of the birds, hanging close to the field’s edge. She even darted into the woods about 10 feet at one point as I’d seen the birds do on their approach. The wind was wrong for her to smell the bird where we set it, so she went past it—straight to where the bird was shot, sniffed around a few seconds and doubled back to where it was laying. Just as we humans depend on our sight, a dog relies on its sense of smell to interpret everything around it. I recalled a factoid I read in American Hunter magazine noting that human noses contain 5 million olfactory receptors, but a dog’s nose can contain as many as 300 million.

Proud of Bella and thankful to be in the moment with Phil, I thrived on just being outdoors in nature’s tremendous beauty. All I had left to do was pose for a picture with Bella, teach her that she could not eat Mama’s bird during our photo session, and field-dress the evening meal. There was plenty to go around and I looked forward to setting aside some meat for friends to try. Being self-sufficient and taking your own wild game from field to table provides the healthiest of meals. At times like this, I tap into the emotions and feelings expressed by avid hunter and bowhunting pioneer Fred Bear:

“Go afield with a good attitude, with respect for the wildlife you hunt and for the forest and fields in which you walk. Immerse yourself in the outdoor experience. It will cleanse your soul and make you a better person.”

When it comes to why we hunt, were truer words ever spoken?

About the Author: Karen Mehall Phillips is the director of communications for the NRA Hunters’ Leadership Forum and senior editor of NRA’s American Hunter. An avid rifle and bow hunter, she has hunted for 30 years and in 29 states, Canada, Italy, Finland, Germany, Spain, New Zealand, Greenland and Africa, including for two of the Big Five.

END_OF_DOCUMENT_TOKEN_TO_BE_REPLACED

Two women who were being attacked attempted to retreat in their vehicle, but the man threatened to kill them, all the while pounding the car windows with a piece of concrete.

The CCW course is believed to be one of the largest women-only concealed-carry gun certification classes ever held in the state of Ohio.

The name change reflects the company’s preparation for the previously announced spin-off of its outdoor products and accessories business.

Here’s how to hide your home-defense gun where you need it the most.

END_OF_DOCUMENT_TOKEN_TO_BE_REPLACED

News, thank the women of the NRA, Refuse To Be A Victim
END_OF_DOCUMENT_TOKEN_TO_BE_REPLACED