While it might feel condescending to be told “it’s all in your head,” during shooting it’s actually a good thing. Shooting success is all in your head. It’s a mental exercise where learning the concepts of psychology will help you to calm your mind and body more efficiently. It can also train us to avoid those thoughts that are distracting or anxiety-provoking. When we can put our full attention on the goals we would like to achieve, and away from thinking we need to achieve those goals to win, save face or be acknowledged by others, we will most likely improve our groupings downrange.

I have met some folks throughout my travels who seem to have an overall sense of confidence, while others are very nervous about trying new things even when it looks like fun. Some even avoid trying altogether. I have come to believe that the majority of folks are a mixture of both the adventurous and the anxious. As a psychologist, I know that we each have the power to increase our level of confidence and put aside our anxieties.

I recently had the pleasure of spending some time with Brittany Long, a sponsored 3-Gun competitor, at our local gun club pistol competition. Since Brittany and I were the only two women in the competition, we decided to meet up after and have a discussion about our experiences. Brittany is majoring in criminology and my background is in psychology. We would spend the next hours learning from each other and comparing notes, especially in that part of the Venn diagram where shooting and psychology meet. 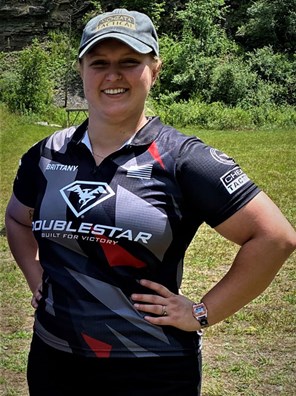 When first asked if she used any psychology to aid her shooting, she said that she had never thought about using psychology. After a little more conversation, she started talking about strategies that were fundamental to her competition shooting. She mentioned being able to calm herself before and during shooting as a very important skill. Watching how other people are shooting, getting upset over a miss or being distracted by anxiety could all cause her performance to be subpar. She has learned to calm herself and regain focus if she loses it.

After further reflection, she revealed that thinking of her goals as obligations instead of desires hurts her performance. For example, her thinking may be, “I need to be better on this part,” or “I need to score at least this on this part to have a chance at winning.” Unfortunately, this has always distracted her from her focus, unsettled her, and she says it never pans out for her. She has learned not to “jinx” herself, focusing instead on the skills she possesses and her desire to improve.

In that one conversation, even though she had never consciously set herself up to do so, Brittany basically described some of the fundamental psychological skills that all shooters have to address. She and other shooters are often able to instinctively apply these mental skills (in some degree) to their shooting. I wonder what would happen if they actually practiced the mental skills as much as the shooting skills!

Brittany, currently a junior at Concord University has competed in 3-Gun competitions both locally and nationally since she was 14 years old. She is sponsored by Doublestar, a veteran-owned firearms and blade manufacturer in Kentucky; and Cheata Tactical, maker of sport and tactical bras, in Pennsylvania, NiceGunz Tactical and TechSolutions. All of which is by way of letting you know that Brittany’s a seasoned shooter with plenty of competition time under her gunbelt. Even an experienced shooter like Brittany benefits from a little psychology. One great story illustrating this is about her very first 3-Gun match.

With two parents in law enforcement, Brittany was introduced to shooting at a very young age. She enjoyed shooting very much, and at 12 years old, she learned about and started watching 3-Gun competitions. Her father urged her to compete, and other shooters would encourage her when she came to watch them. When her father offered opportunities for her to participate, she would decline saying she had not practiced enough. She just did not believe she was ready.

Her father decided that she needed a push. He arranged her participation in a 3-Gun event, gathered all the guns and supplies she would need, had her mother pack a bag for her, and he picked her up, not telling her where they were going. With the decision already made, she agreed to compete. By the end of the competition, she had had a great time and enjoyed support from the other shooters. Most importantly, she switched her thinking from “I’m not ready” to “I can do this.”

Brittany has not stopped competing since then and has gained much enjoyment and recognition. She has had both amazing victories and disappointing defeats while enjoying it all. She has also learned how very powerful it can be and how much you can change your life by changing your belief in yourself.

It’s a little weird that our confidence, our belief in ourselves and our motivation comes to us usually after we have already done something. If you are holding yourself back from something you want to do until you think you are ready or able, you may be waiting a very long time. Draw on your sense of fun and adventure. Find just a few brief moments of courage to try something new. Only after you do it will you know that you can. Nothing will be able to stop you when you think you can.

END_OF_DOCUMENT_TOKEN_TO_BE_REPLACED

News, thank the women of the NRA, Refuse To Be A Victim
END_OF_DOCUMENT_TOKEN_TO_BE_REPLACED