A Golden Moment with a Gold Medalist

A Golden Moment with a Gold Medalist

We'll have to wait until 2021 for the next great Olympic moment, but until then, we can reminisce about one of the greatest Olympians America has ever produced.

Kimberly Rhode had just turned 17 in July of 1996 when she became the youngest woman ever to win an Olympic Gold Medal. Rhode, from El Monte, Calif., has gone on to win two additional Olympic Gold Medals, a Silver and two Bronze in the five subsequent Olympics since that July day in Atlanta almost 25 years ago. She is the first Olympian to win a medal on five different continents, the first Summer Olympian to win an individual medal at six consecutive summer games, and the first woman to medal in six consecutive Olympics, and she is one of the most successful shooters the United States has ever produced.

The 1996 Atlanta Summer Olympics were to be a sensational showcase for the 100th anniversary of the modern Olympics. My “Uncle” Val Forgett of Navy Arms Co. had found an in with the Atlanta Organizing Committee and talked them into allowing the National Firearms Museum to display a collection of Olympic shooting memorabilia at the Wolf Creek Shooting Complex (now known as the Tom Lowe Shooting Grounds). We were very proud to set up a professional display of more than a dozen Olympic Shooting medals and the firearms that were used to earn them, including Launi Meili’s .22 Anschutz rifle and Gold medal from the 1992 Barcelona Olympiad. I had always been mostly interested in military history and firearms, but the chance to fulfill a lifelong desire to attend a Summer Olympiad and learn about a subject that I knew little or nothing about was a dream come true.

I had no idea that there were 15 medal competitions in the shooting sports, and that the United States not only won its first two Olympic medals in 1896 in pistol shooting, but as of 1996, USA Shooters had won more medals than any other sport other than track & field. Hanging out at the Wolf Creek Shooting Complex was an amazing experience as the world press was very interested in what happened there, as evidenced by the multitude of reporters that followed the shooters around like rock stars.

Sadly, the U.S. press all but ignored the American shooters as Kerri Strug and the rest of the USA Women’s gymnastics team won their first ever Gold medal despite Strug’s badly sprained ankle, knocking everything else off of the front pages.

I was wandering around the Olympic Park, which would be the site of a deadly bombing just a few days later, when I first met Kimberly. She was alone and, like so many others in the park, was trading hat pins when I recognized her from the USOC press release announcing her historic win just a day earlier. I walked up to her and, as a typical star struck fan, blurted out “You’re Kimberly Rhode!” Of course she looked at me as if I was a mad stalker but her instinct to flee had not yet set in and I soon apologized for being a fool while I explained who I was and, asked if she yet had a chance to see the Olympic Medal and gun exhibit we had set up across town.

Over the years I have kept up contact with her as her career progressed and tried, so far in vain, to secure her shotgun from the 1996 games for our museum exhibit. (Sadly, her famous shotgun, “Old Faithful,” was once stolen, recovered some time later, and then retired.)

Kim is an amazing sportswoman and one of the truly delightful celebrities that I have had the pleasure to meet. I fondly recall a phone conversation we once had when she had decided to sell some of her extensive Olympic memorabilia collection. One item she had hoped that I could provide some provenance on was an Anschutz .22 starter pistol from the 1936 Berlin Olympiad.

I thought the best way to find out about the gun’s history was to go straight to the horse’s mouth, so I pulled an old business card out of my Rolodex and placed a long distance call to Germany. A little background: The card had been given to me in 1996 by a gentleman I almost had arrested back at the Wolf Creek Shooting Complex. I was busy setting up the exhibits and had the display cases open. When I turned around to open another rifle case, I noticed an older man actually inside one of the exhibit cases applying an adhesive sticker to the wooden stock of Launi Meili’s rifle. Horrified, I literally yelled out, “Just what the hell do you think you’re doing, mister?” He turned and explained that he was putting his company sticker on his rifle. I emphatically stated it wasn’t his rifle, explaining that it was on loan to me and he had no business defacing it. At that point he gave me his card and explained that it indeed was his rifle. His name was Dieter Anschutz, and it was still in fact his gun, and he would put a sticker on it no matter what I had to say about it. After that we became fast friends.

Dieter answered the phone and was quick to tell me that asking about Anschutz factory records prior to 1945 was futile, as U.S. Army Air Forces had destroyed them during bombing raids in 1944 and 1945. 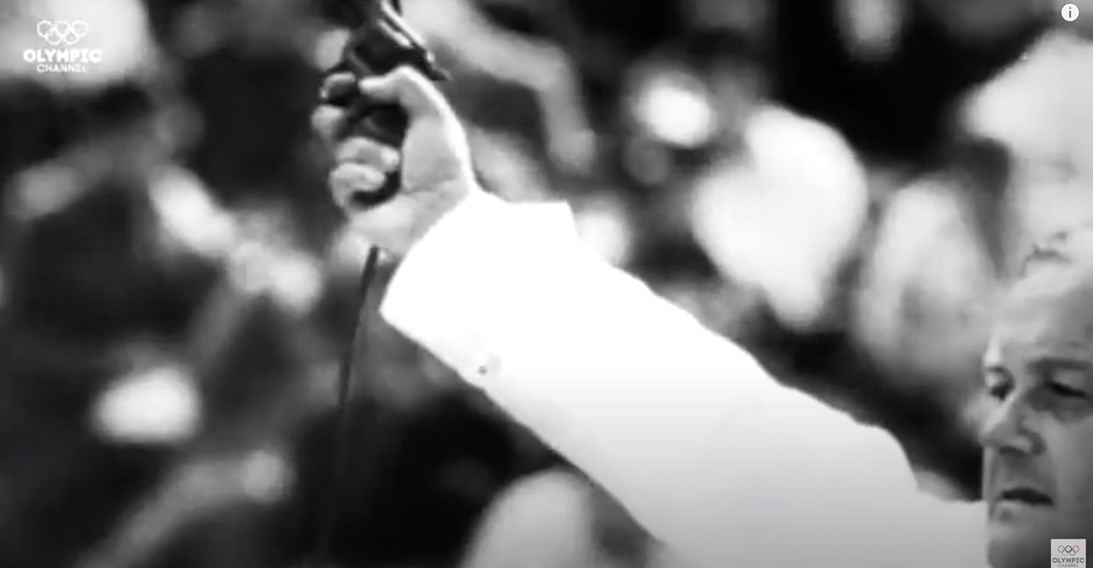 I never did find out if Kim, now a member of NRA’s Board of Directors, sold the Anschutz revolver, or if it was previously used to signal the start of one of Jesse Owens’s Olympic winning track events. With hope one day we can add her 12-gauge Perazzi MX12 to our gallery of Olympic heroes and their guns.

Shooting Sports USA | Looking Back At The 2004 Athens Olympics

END_OF_DOCUMENT_TOKEN_TO_BE_REPLACED

News, thank the women of the NRA, Refuse To Be A Victim
END_OF_DOCUMENT_TOKEN_TO_BE_REPLACED