The end of the world as we know it? We feel fine ... with these three guns.

If you’re fascinated by fiction that focuses on “the end of the world”—and these days, who isn’t?—you’ve probably noticed a common and ominous thread in these scenarios. Whether the fictional apocalypse is due to zombies, natural disaster, war or disease, one thing remains the same. Virtually every movie or book about life in “post-Apocalypse America” features some self-appointed tinpot king who has assembled himself a harem of helpless women. But what happens to the narrative when the women in question are NRA Women? Let’s add three guns to the story and see … .

The Handgun
Ask a soldier or self-defense expert and they’ll admit: In times of actual combat, your handgun is there to help you fight your way to your rifle. That doesn’t mean that the handgun isn’t extremely important, because it is. It’s the gun that you’re most likely to have on you at all times during The End of the World as We Know It (TEOTWAWKI), because it’s just easier to clip on a holster and go about your business than it is to sling a rifle or shotgun and do the same.

When choosing your Armagedd-gun, there are two points to remember. First: During TEOTWAWKI the sporting-goods stores are closed, so you’re going to want to use a handgun that’s chambered in a very common caliber. That increases your chances of finding ready-made factory ammo…and it’ll make it easier for you to reload your own. Second, in this fictional scenario you don’t have to worry about concealing your sidearm. You may, in fact, find that openly carrying your handgun will serve as a deterrent to all the wannabe warlords looking for a few new “wives.”

That’s why the gun we’ve chosen to deliver that “No Thanks, I’m Not Looking For Anything Serious Right Now” message is the Ruger Super Redhawk revolver chambered in .44 Magnum. This six-shot wheelgun boasts a 9½-inch barrel as part of its 15-inch length, and that’s not just to make all those would-be harem masters feel inadequate. That nice long sight radius makes it easier to place shots accurately well past the normal 10- to 15-yard maximum that you’ll get out of shorter-barreled guns. What’s more, the .44 Magnum chambering delivers excellent stopping power on four- and two-legged predators alike. The MSRP is $1,159; the look on Immortan Joe’s face when he sees it, priceless. Ruger.com

The Rifle
When it comes to your Armageddon rifle, you’ll have many of the same considerations that you do for your sidearm. It should be chambered in a caliber suitable for hunting animals to eat … or for dissuading that wanna-be King Solomon from making you Wife Number Forty-Five. The rifle should have a proven track record of reliability and accuracy even under battlefield conditions. Furthermore, that long gun needs to be as portable as possible.

Yes, the size of your long gun matters as much as it does with your handgun, because life after TEOTWAWKI is going to be short on fossil fuels. Did you know that gasoline has a shelf life of only about six months, even when properly stored? That means that unless you’ve got a handy refinery in your backyard, you’re going to be doing quite a bit of walking.

Our post-Apocalypse pick, therefore, is the Steyr AUG. The AUG was the first bullpup rifle—meaning that its action is actually located behind its trigger—ever designed. Because it’s a bullpup, the AUG is just 28 inches long in total (and considering that many guns whose barrels alone are that long, that’s remarkable). That makes it easier to tote, to shoulder and to shoot than a traditional rifle.

As far as ammo supply goes, the AUG is chambered in 5.56x45mm (.223 Remington), which is quite possibly the most popular cartridge in America. Despite its futuristic appearance, this bullpuppy has actually been in production since 1977, and is currently in use by 50 militaries worldwide thanks to its reliability. All of this makes the AUG suitable to send that “No thank you, I have a boyfriend” message to the raiding party that’s headed to your compound. MSRP $1,999; choosing who you do and do not wish to date, priceless. steyr-arms.com

The "Shotgun"
Last but not least on our list of “Let’s Just Be Friends” post-apocalypse guns is the shotgun. Designed for close-range use, your defensive shotgun is likely to stay at your domicile most of the time. You’ll want a reliable and hardy action type so you won’t have to worry about the gun jamming right when Lord Humungus shows up to plight you his troth. That would generally mean a hinge-action or pump-action shotgun. As far as ammunition, your shotgun should be chambered in a 20-gauge at minimum, preferably a 12. The good news is that both of those are widely available, so ammo supply shouldn’t be a problem.

But what about the ammo supply in the actual firearm? Hinge-action guns can’t fire more than two shells without reloading, and pump-actions are usually limited to five. If our Last Man On Earth Lothario brought some friends along on his “picking up women” mission, we’re going to need a bit more firepower.

Perhaps, here at the end of the earth, the best "shotgun" for your consideration isn't a shotgun at all. Enter the Mossberg 590M Shockwave. Despite its appearance, this is a pump-action firearm … just one that allows you to fire 2.75" 12-gauge shotshells from 5-, 10-, 15- and 20-round magazines. When the 590M was released in 2018, our friends at Shooting Illustrated noted “The Mossberg 590M Shockwave is outfitted with a 15-inch barrel and the unique Raptor birdshead pistol grip from Shockwave Technologies, enabling it to be sold as a compact, non-NFA-regulated, shotshell-firing firearm. Unlike the original Shockwave, which fed from a traditional tube magazine located under the barrel, the 590M Shockwave can accept the world's first double-stack shotgun magazine.” 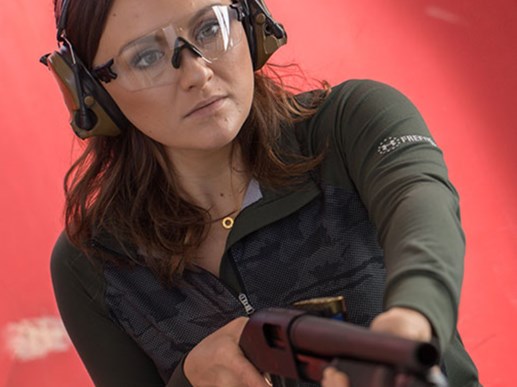 That’s why we figure the Mossberg 590M Shockwave can authoritatively deliver a message in a TEOTWAWKI wife-abducting scenario, and that message is “How About No?” (And with up to 20 rounds in your magazine, you can deliver that message 20 times!) MSRP $721; being an NRA Woman, priceless. Mossberg.com

NRA Family | Be the Envy of the Campground

END_OF_DOCUMENT_TOKEN_TO_BE_REPLACED

Bear Creek Arsenal has targeted the disease with the sales of this hot pink upper.

Whether you're a serious wingshooter or just in it for fun, trap shooting has it all.

END_OF_DOCUMENT_TOKEN_TO_BE_REPLACED

News, thank the women of the NRA, Refuse To Be A Victim
END_OF_DOCUMENT_TOKEN_TO_BE_REPLACED