Whether you're a serious wingshooter or just in it for fun, Trap shooting has it all.

Of the three main clay-target shooting sports in America—trap, skeet and sporting clays—trap is the oldest and remains the most popular. Developed as practice for bird hunting, the sport was initially shot with live pigeons, which were held under a hat or “trap” before being released upon command of the shooter. Clay targets began replacing live birds in the late 1800s. Trap shooting became an Olympic sport in 1900 and remains so yet today.

Trap shooting has a long, colorful history; its most prestigious and popular competition is the annual Grand American Trapshoot held each summer. Many famous trap shooters have competed at the “Grand,” but none more so than the legendary Annie Oakley (1860-1926). The best exhibition shooter who ever lived, Annie was just as amazing with rifles and pistols as she was with shotguns. She made her last public shooting appearance at the Grand American held in Vandalia, Ohio, in 1925, at age 65. Suffering from pernicious anemia in her old age, Annie Oakley would die quietly in her sleep one year later.

Fun and challenging, two more reasons for this shotgun game’s popularity are its simplicity and ease of access. More trap ranges exist in North America than skeet fields and sporting clays ranges combined. Trap ranges can be found anywhere from local gun clubs to modern mega-shooting complexes. For instance, Ohio’s Cardinal Shooting Center has 52 trap fields set side by side, stretching a full mile! 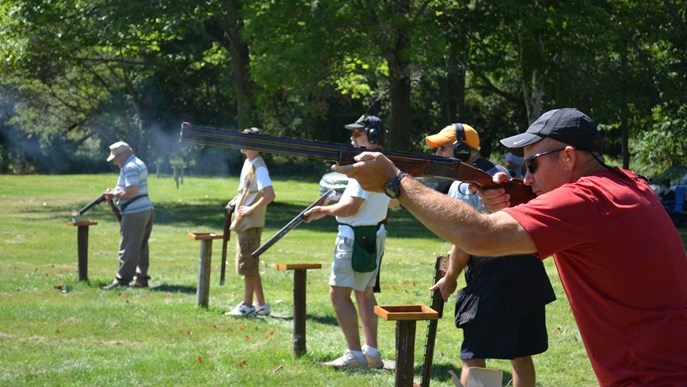 Here’s how the game is played. In trap shooting, there is a single target house. Five shooters—known as a squad—stand behind the house 16 yards away in a semicircle. Targets are always thrown away from the shooters. Upon the word “pull” by the first shooter, a target is thrown and fired upon by that shooter. The next shooter in line then does the same. The shooters take turns shooting, one shot per target, until five shots have been taken by each shooter. The shooters then rotate to the next shooting position. Once a shooter has rotated through all five shooting positions and taken 25 shots, the trap round is considered complete. 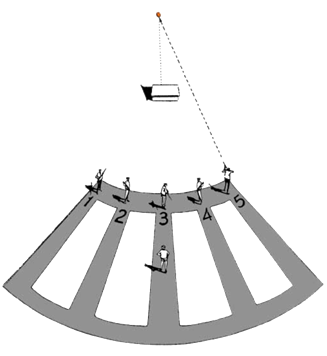 Oh, and one more little detail. To keep things interesting and unpredictable, the target-throwing machine, located out of sight within the target house, is constantly oscillating. Consequently, a shooter never knows exactly where a target might fly. It could be a hard-right angle, hard-left angle or anywhere in between. The easiest shot in trap shooting is a straight-away target, requiring no lead.
(IHEA-USA image)

Proper etiquette is an important part of trap shooting, so when it comes your turn to shoot, load your shotgun promptly, call for the target with a loud “pull!” and take your shot. A trap-shooting squad likes to get into a certain rhythm or cadence, and breaking that rhythm by not being prepared to shoot will mark you as a rookie. That said, do not load your shotgun until it is your turn to shoot. Rather, have a shell in your hand and be ready to load immediately after the shooter before you fires.

Most shotguns for trap shooting are long-barreled hinge-action (over-under) 12 or 20 gauges, but pump-actions and semi-automatics are often used, as well. An advantage of a semi-automatic is that the cycling of the gas system that unloads and reloads the gun following a shot helps reduce felt recoil. What choke tube should you screw into a trap gun? Improved cylinder or modified chokes are usually best.

As for ammunition, target loads of #7.5, #8 or #9 size shot are standard. In fact, for safety reasons, some trap ranges prohibit shot sizes larger than those. Another piece of gear you’ll need is a shooting vest or pouch in which to carry ammunition. Lastly, don’t forget eye and ear protection, and take along a hat with a brim, too.

Note: Are you looking for a place to shoot anywhere in the U.S., whether it’s trap, skeet, sporting clays, rifle or pistol? Go to wheretoshoot.org, a website of the National Shooting Sports Foundation (NSSF).

END_OF_DOCUMENT_TOKEN_TO_BE_REPLACED

News, thank the women of the NRA, Refuse To Be A Victim
END_OF_DOCUMENT_TOKEN_TO_BE_REPLACED